What It Means To Grow An Omer Beard 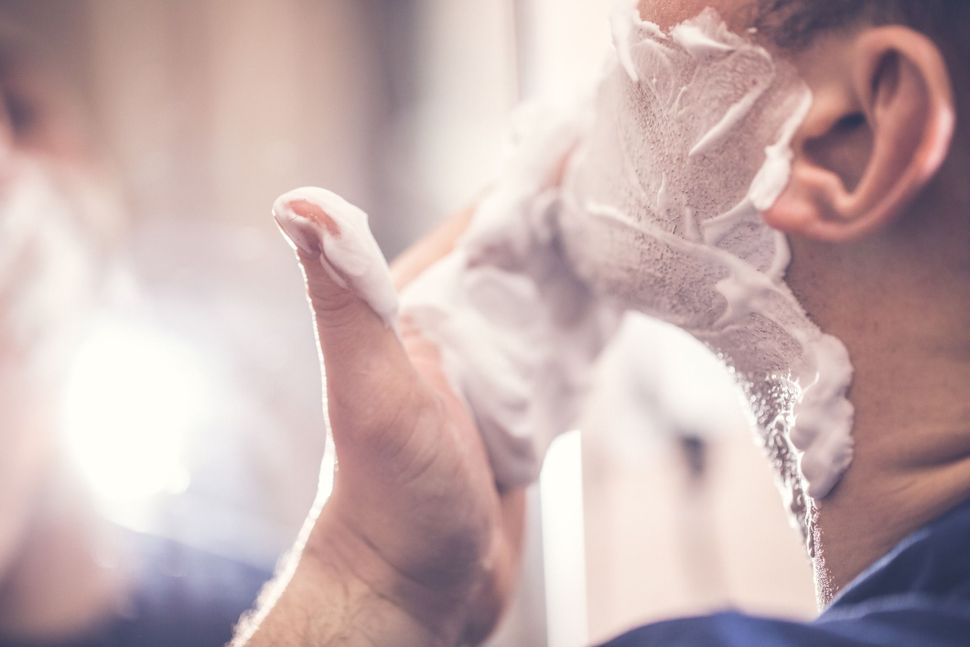 A man shaving Image by iStock

In the springtime, we committed Jews find ourselves asking some strange questions: “Does an orange belong on a Seder plate?“ “How fluffy can my potato flour cakes get before they look trayf?” And, “Should I buy kosher for Passover grass for my guinea pig, instead of oat hay?” Whatever the outcome, these choices are made privately, but as Passover ends there’s another, more public, choice to be made.

“How should I grow my beard?”

To clarify. Not shaving and not cutting hair are signs of mourning. During the first 33 days of the seven weeks of the “Omer” — from the second night of Passover to the next festival, Shavuot — the Jewish people is in a communal semi-mourning period. Until Lag B’Omer, which falls on 18 Iyar, many people stop getting haircuts and some people (mostly men) start to grow beards. So, by May 21, an already hairy people is blessed with especially excellent depth of beard.

As a young man I pretty much ignored this mandate, as did most people around me. In my childhood community, the Counting of the Omer wasn’t something for the Everyjew, it was something for the rabbis and the extremely observant.

But in the last few years I’ve become more interested in why some people shave and others don’t. Because maybe, like I don’t eat bread on Passover, I should not shave on the Omer.

The semi-mourning period is observed for one symbolic and one practical reason. Practically, Ashkenazi Jews keep the low profile of mourning because the spring was pogrom season, when European rulers passed anti-Semitic decrees and mobs looked for the slightest excuse to attack. And, symbolically, we remember the 12,000 pairs of Rabbi Akiva’s students who died of a plague between Passover and Shavuot.

Some rabbis actually think that the mysterious “plague” (“askarah”) may be code for thousands of Jewish men being killed by Romans (for fighting in the Bar Kochba Revolt that Akiva supported, circa 132 CE). Others, though, come to the fascinating conclusion that the deaths came because the students were unpleasant to each other — that the plague was a manifestation of the rot at the heart of the students.

And who is the audience for my symbolic mourning? Who would notice, and if notice, know to care?

Of course, unlike the exhausting, domestic demands of Passover that fall disproportionately on women and which directly affect the observance of the whole family, the symbolic obligation of the beard that falls disproportionately on men is painless and affects no one else. In a sexist, anti-Semitic society, men are the public figures who represent the community and their appearance is of ambassadorial importance. In an open, tolerant society, the significance of Jewish men’s appearance is largely for internal religious distinction.

In the Jewish and educational workplaces of my experience, no one has ever really asked me about my Omer beards or the occasional lack thereof. Perhaps they refrained because I grow a variety of facial hair throughout the year and the Omer beard doesn’t seem unusual. Or perhaps it’s for the same reason I myself have only this year for the first time asked co-workers about their shaving choices. That is, it is very hard to ask, non-judgmentally, why colleagues are — or why they are not — looking slightly unkempt. There is objectively no difference between the scruffy looks of carelessness and of aveilut — it only matters what code it’s in. It’s only an engaged Jew who might recognize that code, but he or she could also see that code where none was intended.

Which is to say, before the Enlightenment, before the Haskala, Jewish men wore beards, while non-Jews were clean shaven — though it’s true that the maskilim, Jewish believers in the Enlightenment, weren’t the first Jews in history to shave. But because of the general segregation of populations it was pretty clear who was who. In 21st century America, we all live jumbled in together: There’s not much difference on show between an Omer-observing Jewish beardie and a hairy gentile hipster or, conversely, between a clean-shaven priest, a heretical Hebrew and an engaged Jew performing his maskil-inity.

You have to be in a very specific environment — to be very certain of any chin you are observing — to ask about its beard. Conversely, as I don’t wear a kippah to frame it, any Omer beard I would choose to grow in a pluralistic environment is likely to be for my own ritual satisfaction.

As we trade Pesach’s minutiae of matzoh for semi-mourning through beard-growing, how should I mark this mourning? Should I act the same as if had lost a loved one — with a seven day shiva, the 30-day shloshim and the year of observance? What would that look like over the Omer? How exactly do we show our communal mourning without undermining how we mourn a personal loss?

There are three basic stances on Omer beards for Ashkenazim. First, no shaving until Lag B’omer (the 33rd day, when the plague was said to cease — or perhaps a battle was won); “second — as per Rabbi Joseph Dov Soloveitchik — don’t have haircuts, but shave a step less than usual; or, third, shave only in mild exigencies. That is, shave for joyous occasions such as circumcisions, bnei mitzvahs or Shabbat (weddings are mostly forbidden during the Omer) or alternatively shave if you’ll be punished (even financially) or thought disrespectful for looking unkempt.

In short, probably I should shave during the 33 days of pre-Lag Omer as I would during the 12 months of personal mourning. So, though the rules seem totally different from normal, once you work through them, it’s like mourning as usual, except one step less intense. Or, alternatively, it’s like life as usual, just one step hairier.

However, in a heavily Jewish Omer environment, beards are always being decoded. It’s a time when the two major positive points of Jewish beardiness get play. First, beards are a sign of wisdom. The word “zaken” means “beard,” but connotes “elder” or “sage.” And, second, beards connote Jewishness. The shaving of Jewish beards by the King of the Ammonites in II Samuel or by the Nazis in World War II were deliberate humiliations as people were stripped of their Jewishness. In contradistinction to Jewish beardiness, Christian priests are called “galekhs” in Yiddish — “the shaven ones.”

So, like a spiritual Samson, the more one has beard, the more one has wisdom and Jewishness. And, in a singular Jewish environment, having a visual cue for those traits is obviously tempting. Especially for young men who are insecure about their age and wisdom, Omer chin fluff is a great opportunity to demonstrate their competitive wisdom and Jewishness. For the rest of us — at least up until Lag B’Omer — it’s just a quiet time of subdued living, spring showers and slight stubble.

Dan Friedman is the director of content and communications at the Shalom Hartman Institute of North America.

What It Means To Grow An Omer Beard