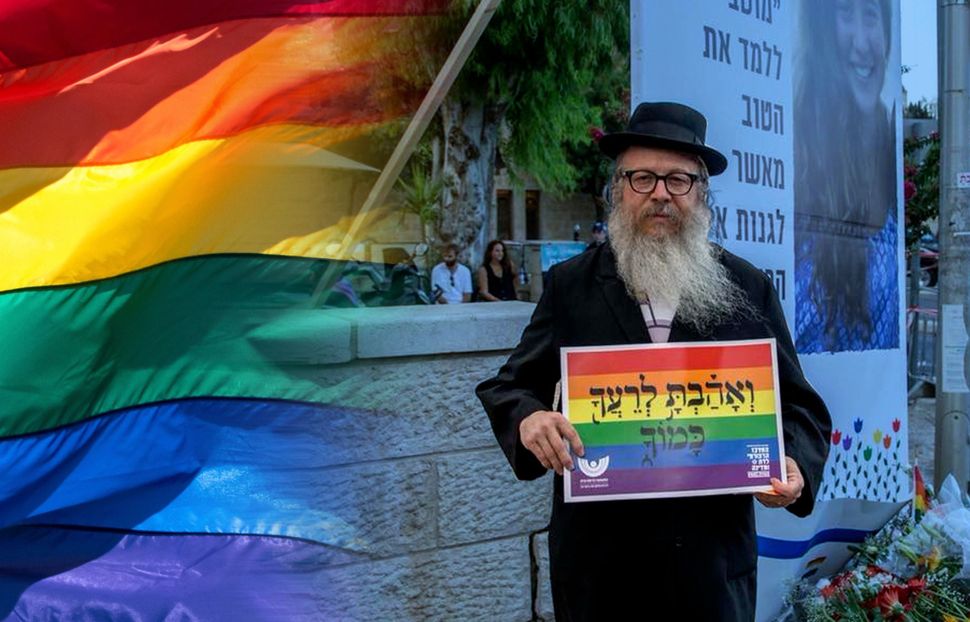 Just a few days ago, a Jewish teenager from South Africa committed suicide while on an organized trip to Israel. Before dying, the 19-year-old—a first-year medical school student—wrote a note on his phone that he was struggling with his sexual identity and his place in the Modern Orthodox community he belonged to.

“Trying to pretend to be something I am not in front of you all is becoming more trying by the day as I’m not the heterosexual being I portray for you. I wish I could have told you guys everything and I know you would have understood, but deep down, I know our relationship would have changed,” the teenager reportedly wrote.

It’s crucial that Jewish institutions and leaders give visibility to the conversation on LGBT identities in Judaism, rather than avoiding them. Only by having more open discussions on the matter we can try to foster an environment in which no teenager will ever be so afraid to reveal their sexual identity that they prefer to die.

While some modern Orthodox communities – in New York in particular — are slowly starting conversations about inclusiveness, plain ignorance about the way LGBTQ Jews are harassed or dismissed in communities seems to be one of the main obstacles that queer Orthodox Jews face. But as long as Orthodox leaders frame sexual orientation and gender identity as choices, it can be difficult to advance a discussion on the matter.

For instance, on the first night of Shavuot, at an Orthodox synagogue of Manhattan’s Upper West Side, a local rabbi led a class on Judaism and homosexuality. A flyer distributed prior to the event said the lecture would be about “the ramifications of Jews who chose an ‘alternative lifestyle.’” As long as Orthodox leaders frame sexual orientation and gender identity as “choices,” it can be difficult to advance a discussion on the matter.

There seem to be great intentions behind events like this one; the main issue, rather than homophobia, may be lack of knowledge and understanding.

A new book published by Routledge tackles many of the issues that LGBTQ people face in Orthodox Jewish spaces. “Homosexuality, Transsexuality, Psychoanalysis and Traditional Judaism,” edited by Alan Slomowitz and Alison Feit, adds a significant new chapter to the modest literature that exists on the topic. The book is a collection of 16 essays divided into two sections—one about sexual orientation, one about gender identity—written from psychoanalytic, rabbinic, feminist, and queer perspectives.

This book—conceived for an audience of psychoanalysts and psychotherapists—is actually a must-read for Orthodox rabbis and community leaders, as well.

The participants in his study also reported being “stereotyped and stigmatized.” In Orthodox communities, being gay is sometimes viewed as their defining characteristic, “focusing on their sexual activity, not on who they are.” In a community that revolves around marriage and family-building, gay adults may be “viewed in an infantilized fashion,” because of the stigma that those who are not married are “kids.”

Orthodox communities often alienate gay people by making it impossible for them to belong. Queer people who are raised in Orthodox communities sometimes internalize the repeated, homophobic messages they hear in their families, schools, and synagogues.

“Coming out as gay,” explains Novich, “is about claiming an identity that runs in contrast to the expectations of the community.”

The book also features an essay by Oriol Poveda, the first sociologist to publish a study on religiosity among transgender people with an Orthodox Jewish background. Religious practices, Poveda explains, are “deeply gendered” in Orthodox Judaism—in the separation of women and men in the synagogue, in the different practices assigned to each gender, in religious items, and so on. Gendering manifests itself in almost every moment of traditional Jewish life.

Poveda guides the reader through the different phases of a transgender person’s life and their possible transition, using gendered religious practices as a way to analyze their relationship with religion.

In another chapter, Miryam Kabakov—a social worker and the executive director of the New York-based Jewish LGBTQ organization Eshel—explores the role of Orthodox parents of queer children. Parents of queer children must also come out of the closet, when they share their children’s identity with their community, often at the cost of being ostracized by their peers.

Parents—Kabakov writes—can “become key players in opening or widening the door to their communities’ acceptance of their children.” When they come out, they “place themselves on the front-lines of the constantly negotiated tension within Orthodox communities about the extent to which they are inclusive.”

A survey conducted by Eshel among 100 Jewish Orthodox parents with LGBTQ children in 2016 suggested that “synagogue rabbis are the last resources parents seek out for help when their child comes out.” That is, most probably, because rabbis—who may be inclined to give halakhic advice on the matter—rarely have the knowledge and pastoral experience needed to understand sexual orientation and gender identity. Kabakov also reports that some rabbis have suggested in the past that parents consider sending their children to “conversion” therapy—which is now illegal on minors in 18 states, including New York.

Parents therefore often find themselves in the uncomfortable position of having to educate their own leaders about the topic.

An underlying, implicit theme of Slomowitz and Feit’s book is leadership. Many of the contributors end their essays calling on Orthodox rabbis to educate themselves and take a step forward in the understanding of LGBTQ identities. Before 1973, homosexuality was considered a mental disease in the United States; in many Orthodox environments, that belief is still held to be true.

At a time when gay rabbinical students are denied ordination by self-described “liberal” Orthodox institutions; at a time when a prominent Modern Orthodox high school finds it acceptable to invite a conversion therapist to speak at a mandatory event for parents; many queer Jews feel that there is still a long way to go to achieve inclusion.

For the rabbis and community leaders who are seeking to address LGBTQ inclusion in the communities, but do not have the necessary tools and the knowledge to do so, Slomowitz and Feit’s book can be a helpful resource to start from.