It turns out I am that kind of Jew after all. Image by John Kunza

Not that kind of Jew.

In the year since I moved to the Crown Heights neighborhood of Brooklyn, I must have said this dozens of times in response to the enthusiastic calls of Chabad emissaries encouraging me to try wrapping tefillin.

I’ve made plenty of excuses, both to myself and to the people on the street. Some were overly philosophical (“people need to know that you can be Jewish and not do that”), but mostly my excuses were mundane (“I’m in a rush. I’m running late”). Politely evading the requests all while continuing down my path of discovery of what it means for me to be “Jew-ish.”

That path led me to typing out the following email to my rabbi a few weeks ago: “I know one thing that I would like to learn is how to properly wrap tefillin,” I found myself writing. “It’s a big thing missing from my routine.”

That email was a long time coming and prompting it was a confluence of events both recent and as old as I am. My Jewish journey started when I was just a little kid hearing my grandfather tell stories about being in concentration camps and how he escaped post-war Czechoslovakia for the United States. In my early 20s, when I sought out a rabbi to help me explore this side of my family more, he gave me a very simple bit of advice: start living Jewishly. So I did.

It started with reading whatever I could lay my hands on (From “Everyman’s Talmud” to “How to Raise a Jewish Dog”), evolved into classes and a JCC membership, and eventually I began celebrating Jewish holidays and observing Shabbat each week. As the years ticked by, my spirituality kept increasing, its appetite only growing. When I found myself at a crossroads moment at the age of 35, I doubled down and moved to Israel, living on a kibbutz for six months working as a glatt kosher chef 6 days a week for only 40 shekels a day (plus room and board).

Visiting the Western Wall for the first time, I knew what I had to pray for— patience and courage. The patience to trust the pace at which my spiritual journey was going, and the courage to follow it through. And last week, nearly a year after making that prayer, I hit another milestone as I took the leather straps of my newly acquired tefillin in my hand for the very first time.

Laying tefillin always felt like one step too far for me. An act of submission at a time when I thought of myself more as a rebel. I felt I needed to be the one to remind the world that Jews come in all shapes and sizes. Call it hubris, call it fear, but that’s who I was.

But I’m also the guy who tries to say the Shema twice a day. I keep kosher. I’m Shomer Shabbos. On these lonely Saturdays of lockdown, I daven alone for hours, missing the communal experience of praying together but saying every word of the shacharis nonetheless.

These lockdown days even added a twist to acquiring my tefillin. I had to arrange to pick up my pair in a socially distanced approved way from a store just down the block from me (call this number when you arrive, stay on the street, we will come down and hand it off to you). And that’s how on the first Tuesday in May, I found myself staring down at these foreign and yet strangely familiar objects. I awkwardly placed the leather box containing the sacred parchment with the four handwritten texts on my arm, making sure to mirror the instructions I was given by the store in a pamphlet. 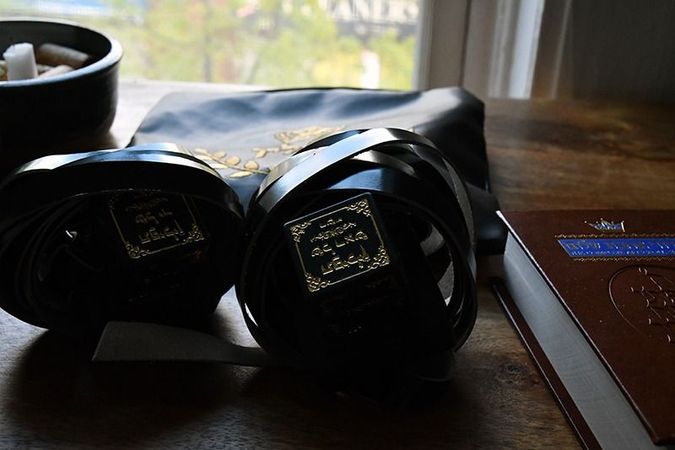 My newly acquired tefillin ready to be used. Image by John Kunza

I had already placed the other box on my forehead to try it on for size and quickly realized that I would need to learn how to re-tie a dalet knot on my own (which according to tradition is the only knot you can use to tie the headpiece straps together to form the head band). Being 36, my head is a little larger than your average 13-year-old bar mitzvah boy’s which is the usual recipient of brand new tefillin. Thanks to the help of Rabbi YouTube, I got the knot right on my first try, my hands slowly working the stiff straps back and forth to form the knot which looks like Hebrew letter “ד” or a dalet. I paused, admiring my handiwork, and thought about how the straps might look and feel after years of use. I am looking forward to growing old with them.

Mamma always said I had a big head. Turns out she’s right. (Well at least it’s bigger than the average 13 year old’s.) Learned how to tie the dalet knot this morning courtesy of Rabbi YouTube. pic.twitter.com/d1DMw9578X

I’d never done this before, yet almost instinctively my hand took over wrapping the leather strap around my arm. Once, twice, a third time… seven in total. Goosebumps formed under the straps I had just placed on my arm, the hair between the gaps tingling. As I put on the headpiece again it was in that moment I knew why I resisted doing this all these years.

I had not been ready, at a spiritual level, to perform the mitzvah. It would have been gimmicky. Call it a lack of maturity on my end, the significance would have just been lost on me. I wouldn’t have gotten anything out of it beyond just doing it for doing its sake. I needed the time to mature and come to the conclusion on my own, to see the value in the ritual and the importance in carrying it on. I hit critical mass spiritually and religiously and knew that in order to have peace inside me I needed to step up my game.

I wish I could say I knew exactly what motivated me to do this at this time. What prompted me to email my rabbi that random day. Perhaps it was getting over coronavirus, or a rapidly changing world and my desire to connect with something more real than what a Zoominar could offer, or it was simply just time for me and it just clicked. But my spirituality got to a point where I needed to physically hold and touch my Judaism, to bring the ephemeral down to earth so to speak— and this was a natural extension of doing that.

I liken it to a snowball slowly rolling downhill becoming larger and larger. The little things that I started in my 20s grew into larger and larger things and eventually everything started clicking into place for me over time. I learned that actions matter and that I’ve run out of excuses.

I know that Judaism teaches that if God mandates an action, it is better do it first and then comprehend it later. That our tradition stresses the deed and the creed will follow.

But Maimonides also said that to have faith was not to suspend reason, rather to allow reason to come to its most logical conclusions. I needed the patience to come to my own conclusions and for me personally that meant that there had to be meaning behind my deeds or they’d just be empty gestures. I then needed the courage to carry them out.

I finally found meaning. My own personal meaning in the mitzvah.

Finishing the prayers, I got back to work with the ghost feeling of the straps still touching my skin. I couldn’t get over what I had just done. Looking down, I tracked the progress of the marks left behind by the leather slowly fading from my arm as the day ticked by. The words “You shall bind them as a sign upon your arm, and they shall be for a reminder between your eyes” echoed in my head.

It’s still hard to explain what clicked in that moment because it was so personal, but a quote by Rabbi Jonathan Sacks gets close: “Jewish faith is the supreme expression of reality as it responds to and affirms the personal.”

Both worlds collided in that moment. Spiritual and religious. Patience and courage. I never felt so grounded in my spiritual practice. The years of soul searching and finding more meaning in religion meshed into one conscious, mindful moment. I never felt more Jewish.

It turns out I am that kind of Jew after all.

I’m picking at a new project this week, writing a column about spirituality. My first topic? No biggie. Just being 36 years old and finding value in wrapping tefillin for the first time (ever). Go big or go home right? I look forward to sharing my spiritual journey with you! pic.twitter.com/IC9BnfZPWw