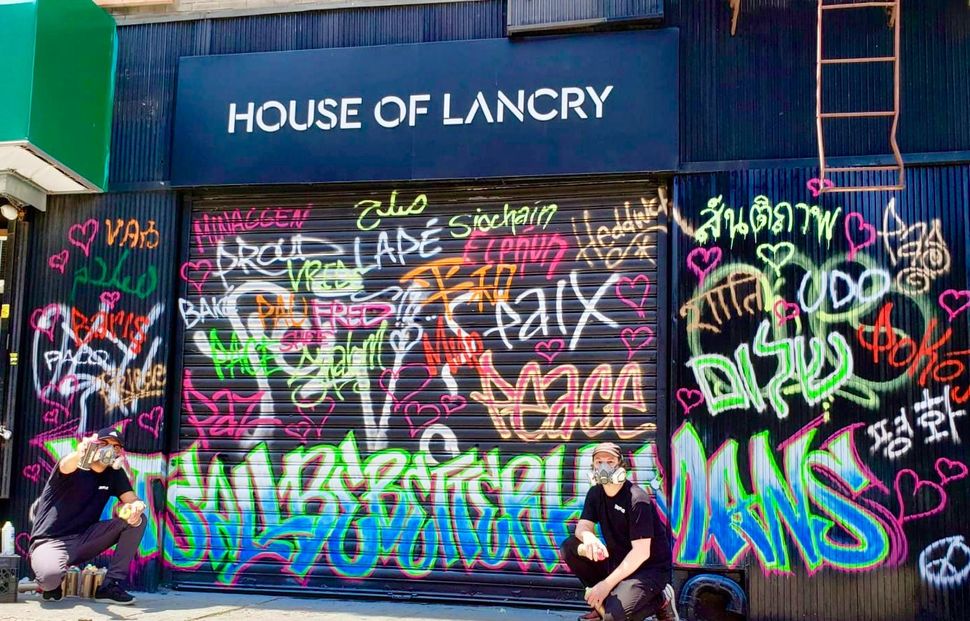 Tanami and Avraham pose with the finished mural. Image by Courtesy of Joseph Tanami

But here in Brooklyn’s Crown Heights neighborhood, among the shops whose glass windows are covered by rolling metal grates, one stands out. At House of Lancry, a modest fashion brand owned by British designer Hannah Lancry Sufrin, an exuberantly colorful graffiti mural cover has taken over the once-minimalist storefront. “Let’s all be human,” neon blue letters urge passerby. Surrounding that optimistic slogan is the word “peace” written in dozens of languages, from Spanish and Arabic to Irish Gaelic and Chamorro (a language spoken in the Mariana Islands).

Beneath it all, just barely visible to the viewer who knows what to look for, is another word, scrawled in white spray paint by a different hand: “Jew!”

On June 15, a store employee sent a photo of that single word to Lancry Sufrin, who is based in London. The anti-Semitism inherent in the vandalism rankled with the Jewish designer.

Crown Heights, where House of Lancry’s Brooklyn store is located, the home of the Chabad-Lubavitch movement. The source of the graffiti is unknown.

Related story: “It should call out to every Jew:” Crown Heights rallies for Black Lives Matter

Posting on Instagram about the incident, Lancry Sufrin said it was an ironic reminder of her longstanding hopes for the storefront. “I’ve always wanted to paint an amazing mural where people would take pictures and it would become a point of reference,” she wrote in an Instagram story. She even sketched out ideas for possible designs that would incorporate the original vandalism, including one that transformed the word “Jew,” deployed as a slur, into the phrase “Jewish and proud.”

That’s when brand strategist Elisheva Perlman got involved. After seeing the vandalism, she contacted Joseph Tanami and Betzalel Avraham, the artists behind graphic design firm Art of Your Mind, with whom she’d worked on previous projects.

Elie Weisel shared a glimpse into his⁣ memory of liberation day. Upon realization that freedom was a reality he looked around and noticed men slowly shifting together, nodding in acknowledgment to finally be able to pray. Not just to pray internally but to finally pray as a group, a minyan. Their response to hate, was to gather together as a group and start to pray. Again. ⁣ ⁣ Seeing the hate message splattered across @houseoflancry storefront, made me think of that anecdote. ⁣ ⁣ We fight hate with love. ⁣ ⁣ I realized that this years @brooklynmrkt theme – grafiti art – allowed me to have access to so many incredible street artists. It was an instant thought to call upon them and ask if they can take something so ugly and perverse and turn it into art. @artofyourmind didn’t blink for a moment and answered a resilient YES. ⁣ ⁣ I’m not sure how decisions on a spiritual plane are made but I find there to be some deeper message amidst the fact that the graffiti art we planned to share with thousands of @brooklynmrkt shoppers, never had a chance to be seen. ⁣ ⁣ Yet this same artist was able to paint and transform the canvas of hate for one of our veteran MRKT vendors, @houseoflancry We fight hate with unity.

Tanami said the situation spoke to him deeply. “There’s a lot of stores there, but they chose to put it on this store because the owner is Jewish,” he said. “This is how it started in Germany.”

Normally, Tanami and Avraham take their time planning a project before getting to work. But they got started on this mural just a day after receiving Perlman’s call, brainstorming with Lancry Sufrin via Whatsapp. 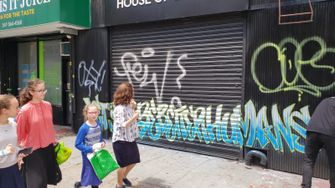 Onlookers watch the mural in progress. Image by Courtesy of Joseph Tanami

For Tanami, creating art that acknowledges the original vandalism is preferable to simply painting over the slur, a confident response that helps dispel the shame that can accompany an episode of anti-Semitism. “She took something bad that somebody did and did something good,” he said, speaking of Lancry Sufrin.

And it seems like others agree. After finishing work on the mural, Tanami said, he and Avraham lingered to observe Brooklynites of all stripes who stopped to check out the art. “Everyone was passing by and taking pictures,” he said. “Not just Jews.” 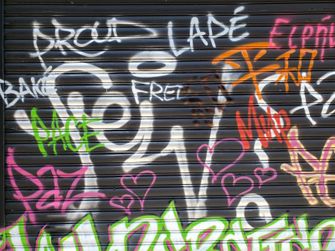 The mural covers the original slur with the word for peace in several languages. Image by Courtesy of Joseph Tanami