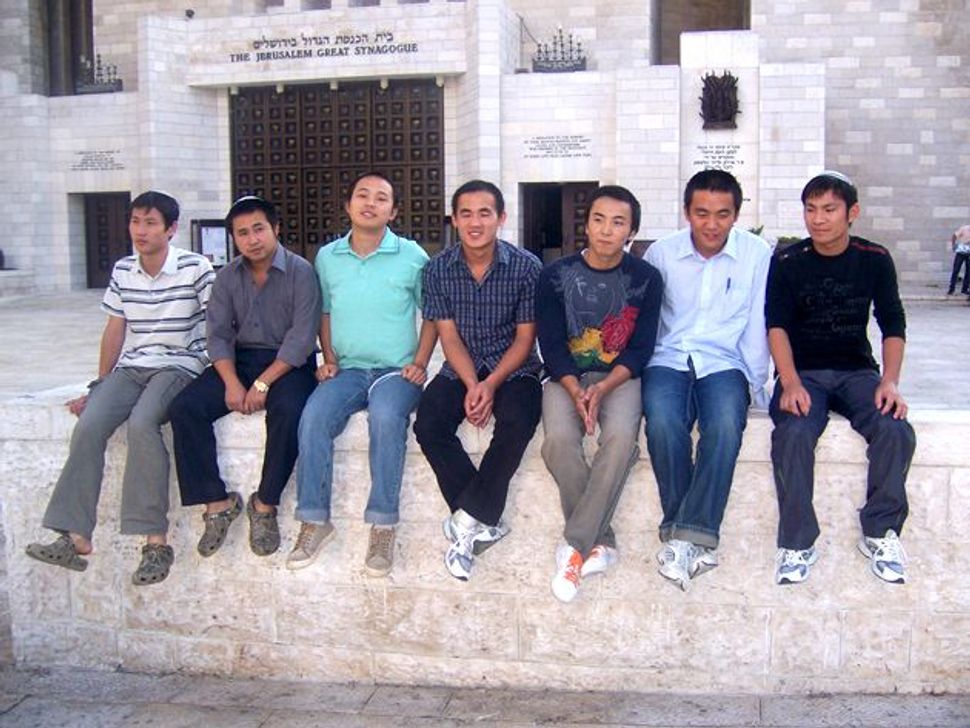 A year ago they were living by the bank of China’s Yellow River. Now, the seven yarmulke-and-tzitzit-clad young men, sitting in central Jerusalem and chatting about their lives, are Israel’s keenest yeshiva students.

It is the end of July, the day after the Fast of Av, when every yeshiva halts for summer break — but this group won’t stop.

They come from a community that has fascinated Jews for centuries — China’s Kaifeng Jewish community. Jews are said to have settled in China in the eighth or ninth century. It is believed that at one point, there were as many as 5,000 Jews in Kaifeng; however the community disintegrated in the mid-19th century, with the death of its last rabbi, and those members that hadn’t done so already intermarried and dropped most aspects of religious observance.

The seven men in Jerusalem are descendants of this community in which families retained a sense of Jewish identity and, in some cases, in a manner reminiscent of the Marranos of Spain and Portugal, clung to some disjointed traditions.

They have already earned their place in history, as the first group of Kaifeng men to ever study at an Israeli yeshiva. But they want to convert to Judaism as soon as possible and, under the Law of Return, exchange their visitor visas for aliyah visas and make their move to Israel permanent. Their study program is preparing them for conversion tests.

“Here is my home,” said Li Fei, 22, describing how he felt on the day of the group’s arrival last October, when he visited the Western Wall.

Kaifeng’s Jews are said to have been merchants from Persia or Iraq who made their way eastward along the Silk Road and established themselves in the city with the blessing of the Chinese emperor.

In 1163 they built a large and beautiful synagogue, which was subsequently renovated and rebuilt on numerous occasions. The community enjoyed a golden age of sorts during the 1368–1644 Ming Dynasty, when Jews were permitted to join the civil service, providing them with an important means of career advancement.

In the past decade, some descendents of Kaifeng Jews have become increasingly interested in their heritage — partly because of a more liberal atmosphere in China, partly because the Internet has allowed them to access previously unavailable information about Judaism, and partly because Jewish individuals and organizations have visited them. There are about 1,000 people in Kaifeng who are aware of their descent from the Jewish community, and a core of 35 who have, for the past five years, been meeting for meals and prayers on the Sabbath.

One organization that visited Kaifeng was Shavei Israel (“returners to Israel”), a Jerusalem-based not-for-profit that exists to strengthen ties between Israel and descendants of Jews, including the Marranos and the Bnei Menashe of India. Back in 2005, it arranged temporary visas for three Kaifeng women. These women moved to Israel, converted and made aliyah, prior to which only a single family from the community had come. The seven young men form Shavei’s second group.

“We cannot and must not turn our backs on them, regardless of whether they choose to make aliyah or remain in Kaifeng,” the group’s chairman, Michael Freund, told the Forward. “Either way, they deserve a chance to learn more and to engage their Jewishness, just like any other Diaspora Jewish community.”

The latest arrivals spent their first six months in Israel on Sde Eliyahu, a religious kibbutz in the north of the country. They took Hebrew-language classes in the morning and worked in the afternoon. For one month, they then lived in an apartment in Jerusalem and studied at the Machon Meir yeshiva. And since the beginning of July they have been studying in a program that Shavei compiled especially for them at Hamivtar yeshiva in Efrat, which is headed by the founding rabbi of New York’s Lincoln Square Synagogue, Shlomo Riskin. After such intensive preparations for conversion, all of Israel’s local rabbinates — even the strictest ones, which in recent years have controversially contested some conversions — are expected to accept the students’ Jewishness.

The students’ relationship to Judaism varies: Some only learned of their heritage during their teens; others grew up in families that always avoided pork, and with grandparents that tried to inculcate something on Jewish tradition. Wang Yaacov, 24, is amused by the widespread assumption that he took on his last name in Israel. “My grandfather found it in the Chumash,” he said.

The parents of all the students are happy that their children are in Israel, “because in the Bible it says from every different country, all the Jews will come back here,” 22-year-old Xue Fei said.

Most in the group grew up without making the connection that modern Israel was the Jewish state. For 23-year-old Shi Yuguan — who simply goes by Shai in Hebrew — this discovery was a relatively recent one. “About six or seven years ago, I found out that there are many Jews in Israel, so Israel is a place where many, many Jews came together. So after this, I started to find out more about Israel,” he recalled. “After this [conversion], I want to learn more about Israel — I want to learn more and more and more.”

With the exception of their language classes, their studies have been in English, which they all speak fluently.

Their take on Judaism and on life in Israel is interesting. It’s not the strictness of Jewish law that they find tough, but the leniencies. The fact that the halachic texts they are studying makes provision for situations when a laxer view of law can be taken is confusing. They don’t feel slighted that they already feel a strong connection to Judaism but need to convert — they recognize that their forebears intermarried. They have no complaints about their treatment in Israel. One of the advantages of aliyah is the possibility of having a family of more than one child (they decry Chinese children as spoiled as a result of the one-child-per-family law). Though they don’t fit the Sephardic-Ashkenazi mold, they think they will consider themselves Sephardic after they convert and ideally, several say, marry Persian-Jewish women. All want to serve in the army, and some have career plans. Xue wants to become a dentist.

But the most resolute statement comes in response to a question about food. Israelis are crazy about Chinese food, and there are Chinese restaurants everywhere, but these men keep well away. “In Israel, the Chinese [restaurants] are not like Chinese foods — they have to change the flavors for Israelis,” Shi said. So what do they like to eat? In chorus, all the students replied, “Shwarma.”