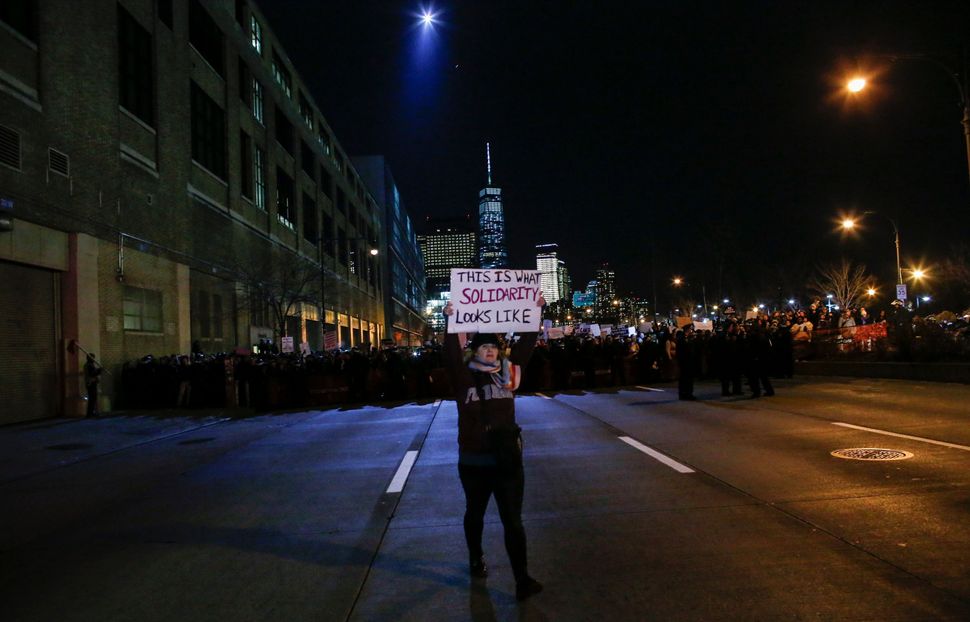 Amid the nearly 40,000 words that make up the recent manifesto issued by a large coalition affiliated with the Black Lives Matter movement, two have raised an outcry among mainstream Jewish organizations and leaders.

Those two words, in a brief section about Israel, are “apartheid” and “genocide.”

The August 1 manifesto, penned by a coalition of some 60 grassroots organizations known as the Movement for Black Lives, is largely focused on the group’s ideas for achieving racial justice for African Americans in the United States, not on Israel.

There are sections calling for, among other things, free college educations and economic reparations for black people, and a long section, too, decrying U.S. policies toward a lengthy list of countries and peoples, from Libya, to Somalia, to Haiti and the Garifuna people of Central America, among others.

But in the Jewish world, responses to descriptions of Israel in the foreign policy section held sway. And reaction was intense, following a period in which several mainstream organizations have supported the movement to varying degrees and many young activists have rallied to Black Lives Matter protests sparked by shocking videos of black men shot or abused by police.

The Reform movement’s Religious Action Center and the Anti-Defamation League were among the groups that criticized the reference to Israel as “an apartheid state with over 50 laws on the books that sanction discrimination against the Palestinian people.” Even more vehemently, these Jewish groups condemned the coalition’s charge of U.S. complicity, via America’s large sums of aid to Israel, “in the genocide taking place against the Palestinian people.”

Some smaller Jewish groups on the left end of the political spectrum accepted or defended this language.

But few knew that it was a woman with a Jewish background who co-wrote the very section that provoked them. Rachel Gilmer, a 28-year-old African American who was raised Jewish, has long been involved in black-Palestinian solidarity work. Gilmer is associated with the activist group Dream Defenders, which has been on the forefront of recent black-Palestinian solidarity efforts, such as bringing high-profile delegations of African-American activists to Israel and the West Bank.

Born to an African-American father and a white Jewish mother, Gilmer was raised as a Jew and participated as a teen in Young Judaea, the Zionist youth group. There, she rose to become a leading member of her local group. But Gilmer later distanced herself from organized religion. 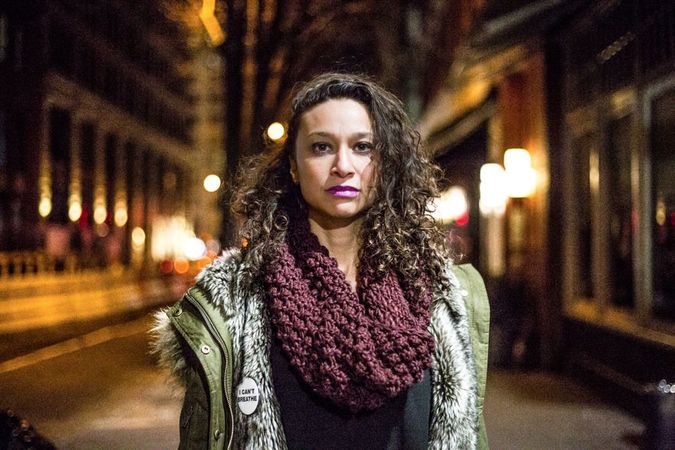 Face of a Movement: Rachel Gilmer, an African American who was raised Jewish, was one author of the lengthy platform issued by the Movement for Black Lives. Image by YouTube

“When I got connected to social justice, I found my spirituality in the heart of organizing,” Gilmer said in an interview with the Forward. “I no longer felt like organized religion was a path I wanted to go down.”

In an interview with the Israeli news outlet Haaretz, she also described herself as “somewhat scarred” by her experience growing up as a biracial Jew. “I got called Aunt Jemima. I had a lot of internalized racism. When I became politicized around my race, I became very angry,” she said.

In May, Gilmer traveled to Israel and the West Bank and was moved by what she saw. “While our struggles are not identical, it became so clear that we are up against the same system of state violence and repression,” she said. “We must call for the divestment of the military industrial complex, just like we are calling for a divestment from the policing of our neighborhoods.”

Gilmer is far from the only person responsible for the Movement for Black Lives platform. The manifesto was the result of a year of meetings, debates and conference calls among black-led organizations. Hundreds of individuals were involved. And she shared writing duties on the Israel section with another activist, Ben Ndugga-Kabuye, from the Black Alliance for Just Immigration.

So how did hot-button terms find their way into the document? Was Gilmer sensitive to how the Israel-related language would be received in the Jewish community?

“We recognize that the use of the term genocide is controversial — whether used in reference to the systemic killing of Black people here in the US,” Gilmer wrote in an email to the Forward, “or the killing of Palestinians. However, we believe it is accurate.”

Gilmer does not identify as Jewish now, but she said that authors had been “in community” with Jewish anti-occupation groups that have also supported Black Lives Matter, including Jewish Voice for Peace and IfNotNow.

She stressed the platform was written “for and by black people … to build connections between the Movement for Black Lives in the U.S. to movements for liberation around the world.”

But while JVP has been supportive of Black Lives Matter since the movement coalesced in 2013, the group was not directly involved in drafting the new platform, said Rebecca Vilkomerson, its executive director. IfNotNow, which has also vocally supported the platform, played no direct role, either.

IfNotNow activist Yonah Lieberman stressed that the group does not use the words “apartheid” or “genocide” to describe Israel’s actions.

“We know why our community was upset by the use of the word ‘genocide,’” he said. “I don’t think we would have used that language. Using that word is loaded for the Jewish people. That is not the way we understand the situation. We use the word ‘occupation.’”

“There has not been a formal conversation with the Movement for Black Lives about what word they should use,” he said.

Gilmer defended the use of the term. “There is a long history of those in power telling Black, Brown and all oppressed people how they can describe the violence inflicted upon them,” she wrote to the Forward. “We reject this history and believe that those who are suffering the brunt of oppression, mass killings and violence have the right to name what is happening to them.”

The Jews of Color Caucus, a group with JVP, also defended the use of the term “genocide,” highlighting its meaning for some African Americans.

“White Ashkenazi Jews,” the caucus wrote, are attempting to “assert sole claim to the limits and bounds of what constitutes ‘actual’ genocide.”

Indeed, the term was first coined and defined in 1944 by a white Ashkenazi Jew, Raphael Lemkin, a Jewish Holocaust refugee and international law expert who fled Poland during World War II, in which he lost most of his family.

Lemkin, who invented the term from the Greek prefix geno, meaning “tribe” or “race,” and caedere, the Latin word for “kill,” defined it as “a coordinated strategy to destroy a group of people, a process that could be accomplished through total annihilation as well as strategies that eliminate key elements of the group’s basic existence, including language, culture, and economic infrastructure.”

Though his immediate focus was the Holocaust and Turkey’s mass slaughter of Armenians after World War I, Lemkin stressed that instances of genocide had occurred throughout history. His years of campaigning are credited with moving the United Nations General Assembly to adopt the Convention on the Prevention and Punishment of the Crime of Genocide in 1948, making genocide an international crime, using his definition.

In an August 5 statement, the Jews of Color Caucus said, “We embrace rather than shut down the multiple uses of the term ‘genocide’ for what it can reveal about our current crises.”

Describing themselves as part of “a heterogeneous Jewish people who have endured multiple genocides,” the caucus criticized “historical retellings” of the Jewish experience, “which have often erased the narratives of Jews of Color.”

Historical and contemporary state-sponsored violence, including segregation, police brutality and mass incarceration, “is well-documented, and is arguably genocidal,” the group argued, adding that it sees these forms of oppression being deployed in the occupied West Bank.

The current state of relations between black political organizers and the Jewish establishment was shaped during the 2014 Gaza war and the protests that rolled through Ferguson, Missouri, in August 2015, said Robin D. G. Kelley, a professor of history and black studies at UCLA — and can explain how the words “apartheid,” and particularly “genocide,” became part of the activist vocabulary.

“You can’t separate this document from the events in Ferguson,” he said. “It is in Ferguson that you have a number of Palestinian and pro-Palestinians on the front lines, participating in the demonstrations, making comparisons with the war in Gaza.”

Kelley explained: “The convergence of these events created a new set of possibilities for solidarity. There was a sense of war, a sense that war is taking place. So the language of genocide comes out of the context of Ferguson, and the shadow of the war on Gaza.”

Those events informed the hundreds of activists who convened to discuss the issues that would become the new policy platform, Kelley said.

For many of these young activists, who have studied texts like the Black Panthers’ Ten-Point Program from the 1960s and papers by the revisionist Israeli historian Ilan Pappe, “genocide may not be defined solely as death but as cultural genocide,” said Kelly, “losing a culture, losing a language, losing your land.”