Did Trump Just Compare Himself To King Cyrus? 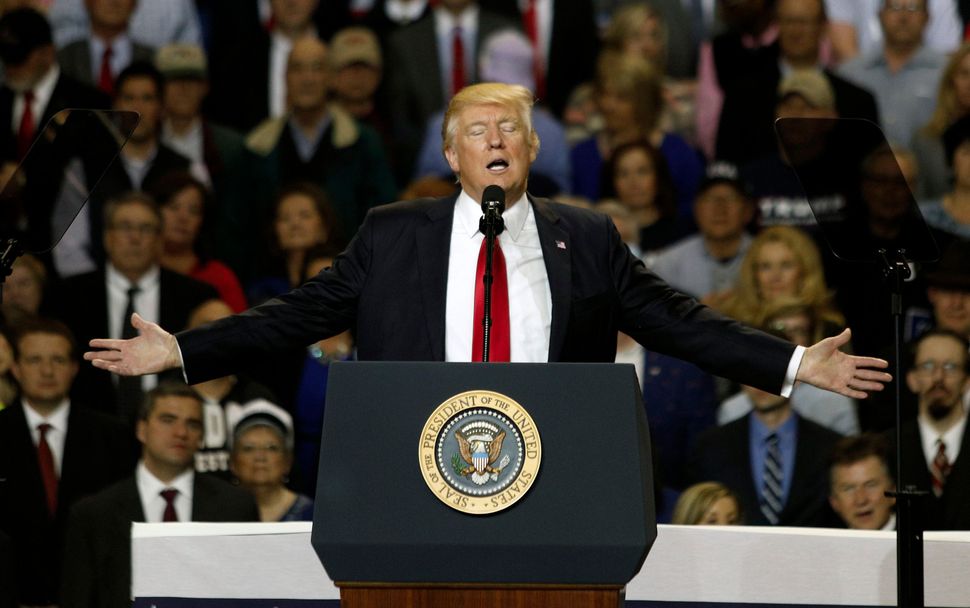 In a statement for Nowruz, the Persian New Year, President Trump quoted Cyrus the Great — and seemed to suggest a comparison between himself and the ancient Persian ruler.

“Cyrus the Great, a leader of the ancient Persian Empire, famously said that ‘freedom, dignity, and wealth together constitute the greatest happiness of humanity. If you bequeath all three to your people, their love for you will never die,’” a March 22 statement from Trump read.

Trump went on, “On behalf of the American people, I wish you freedom, dignity, and wealth.”

The reference could slip by most, but for some of Trump’s fans, it will hold great meaning.

That’s because some Trump supporters see him as a modern-day Cyrus, “anointed” by God to rule.

During Trump’s campaign, comparisons of Trump to the Cyrus circulated widely in evangelical and some Jewish circles. Many compared Trump to Cyrus, referred to in Isaiah as God’s “anointed one,” who — though not Jewish — served the Hebrew God and aided the Jewish people.

Likening Trump to Cyrus was a way to make spiritual sense of the dizzying election.

Trump was a decidedly non-religious candidate — but one who was seen as still serving the interests of Americans on the religious right.

“It’s not a normal election and so we — it’s — we almost need a different kind of candidate,” evangelical speaker Lance Wallnau told CBN news in November. “Trump has the Cyrus anointing to navigate in chaos.”

Wallnau, who incidentally claims Jewish roots, led the charge in the Trump-Cyrus comparison. Wallnau even met with Trump last year — and afterwards said he “heard the Lord” say “Trump is a wrecking ball to the spirit of political correctness.”

While the Cyrus trope was most popular with evangelicals, in some Jewish circles, the comparison also took hold — particularly among the controversial Temple Mount movement, which seeks to rebuild the Jewish Temple in Jerusalem to hasten the coming of the Messiah.

For them, the comparison is even more explicit: in the bible, Cyrus decreed that the Jewish Temple in Jerusalem be rebuilt after the Babylonian exile.

After Trump’s election, member of Knesset and leading figure in the Temple Mount movement Yehuda Glick said that if Trump were to move the U.S. embassy from Tel Aviv to Jerusalem, “He will be the latter-day Cyrus.”

“A lot of Trump supporters are going to make a big deal that he cited Cyrus in this statement,” said Brian Tashman, a researcher for the website Right Wing Watch. “With his election, they believe something miraculous happened.”

Did Trump Just Compare Himself To King Cyrus?