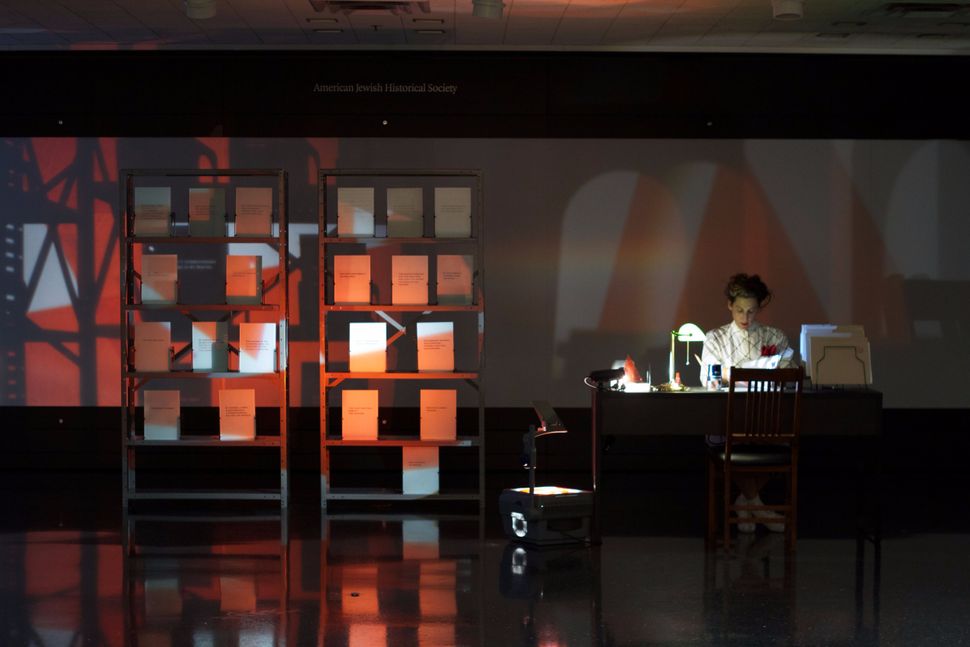 An Israeli-born artist has pulled her installation from an American Jewish Historical Society exhibit to protest the organization’s decision to cancel a reading by a left-wing playwright amid a pro-Israel pressure campaign.

Ofri Cnaani’s mixed-media installation “For Her Own Good” was meant to be on display until November, but she took it down on Wednesday, the day after AJHS cancelled a long-planned reading of Dan Fishback’s new play “Rubble Rubble.”

As a Jewish person and an artist, “standing next to my friend and comrade [Fishback] today will be the right way to take an active stand in this ongoing battle about free speech and I would rather perform my voice than my silence,” Cnaani wrote in an e-mail.

The piece is a mixed-media installation about the Jewish anarchist leader Emma Goldman, focusing on a 1917 incident in which a U.S. Marshall warned her to stay silent at a public meeting or face consequences.

AJHS’s cancellation of Fishback’s reading, along with its simultaneous cancellation of a panel discussion co-sponsored with New York chapter of the left-wing group Jewish Voice for Peace, has thrust the historical group into turmoil over the past 24 hours.

The AJHS’s executive director, Rachel Lithgow, did not respond to multiple requests for comment. After providing a single-line initial explanation of the cancellations on Tuesday, the board’s chairman, Sidney Lapidus, told the Forward on Wednesday that senior board officials chose to scrap the long-planned programs because they felt they were peripheral to the organization’s mission.

“The mission of the AJHS is to serve as a preeminent archive of the history of the Jewish people in America,” Lapidus said. “There are many venues for discussions and performances such as those that were proposed here, but they are mostly peripheral to our mission… It was on that basis that we decided to cancel the events.” 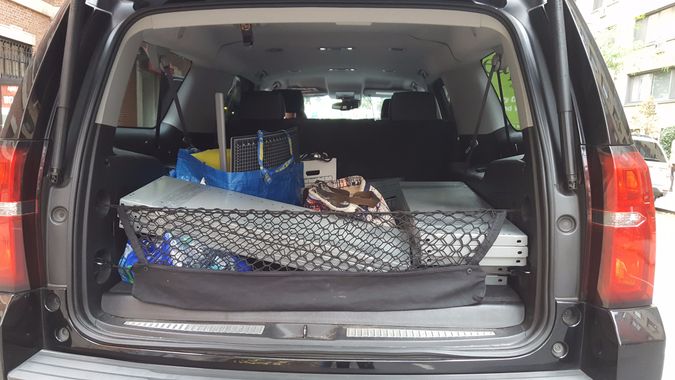 Ofri Cnaani packed her exhibition “For Her Own Good” after pulling it in protest of AJHS’s cancellation of reading by a left-wing playwright. Image by Ofri Cnaani

The internal deliberations at AJHS over what to do about the programs happened amid intense pressure fomented by a network of right-wing activists and organizations campaigning for the firing of David Myers, the new executive director of the Center for Jewish History, over his ties to liberal pro-Israel groups. AJHS is one of five member institutions housed in the CJH building in downtown Manhattan.

Right-wing Jewish groups have staged at least one rally outside the CJH, calling for Myers’ firing. The campaign comes at the height of fundraising season in the not-for-profit sphere. AJHS’s gala, named for the activist poet Emma Lazarus, is scheduled to take place in just over four weeks.

Days before the cancellations, one of the pressure campaign’s organizers, public relations executive Ronn Torossian, published a column attacking AJHS for working with Fishback, who is a vocal supporter of the boycott, divestment and sanctions movement.

Senior officers on the AJHS board were not aware of the specifics of the JVP-sponsored lecture or Fishback’s play reading before the pressure campaign drew attention to them, according to a source familiar with internal deliberations at AJHS who asked not to be named because of the sensitivity of the conversations.

Speaking to the Forward on Tuesday, Fishback said that the play, which has not yet been staged, is a portrait of a family split over Israel and Zionism,. He said the believed the cancellation was about his personal politics, not the content of the play.

“The situation reflects people creating impossible choices for these institutions,” said Lila Corwin Berman, a professor of Jewish history at Temple University, the chair of AJHS’s academic council, and a member of its board of directors. “Anybody who stands from the outside and claims to know what the right thing to do is does not appreciate the really polarizing, vicious context in which this is happening.”

Berman said that she was not consulted prior to the cancellation of the two events. “The attacks on the [CJH] reflect a real maniacal effort to restrict what institutions can do and what the American Jewish community can do,” she said.

Cnaani, the mixed media artist, posted on Facebook hours after the announcement of the cancellation of Fishback’s reading that she would pull her installation. The next morning she dismantled the artwork and drove it away in the trunk of her car.

As part of the installation, Cnaani has asked followers on social media if they had ever been told to stay silent for their own good. She presented the responses at an AJHS event marking the installation’s opening night.

When the marshall told Goldman to stay quiet, she stuffed a handkerchief in her mouth, and stood silent before the crowd.

“I decided as an act of solidarity to take the exhibition down,” said Cnaani. “It’s really an exhibition about silencing.”