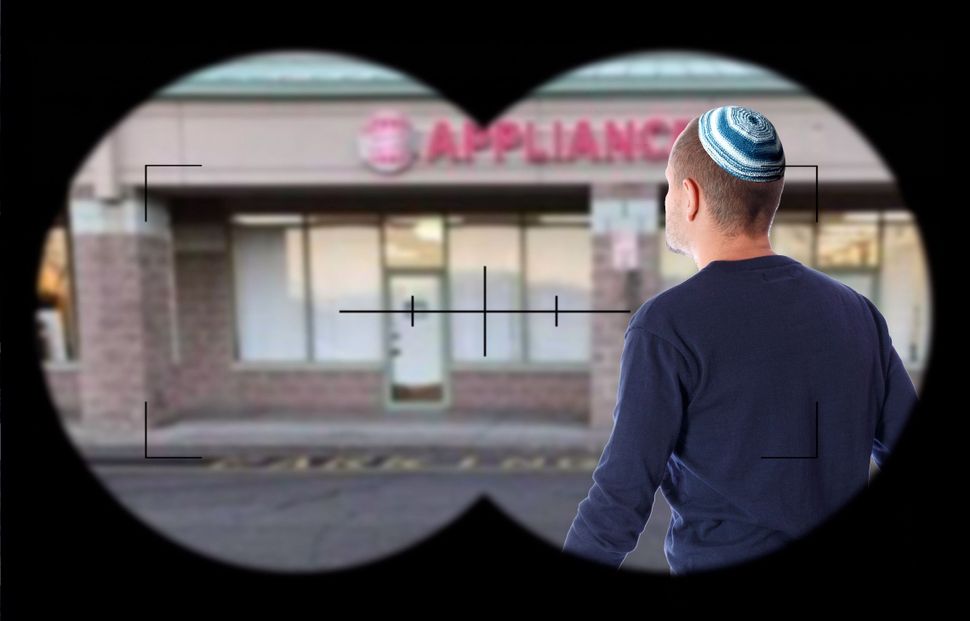 World of Appliances is a small strip mall operation, sandwiched between a Dunkin’ Donuts and a sushi joint. Four days a week, it sells refrigerators, washing machines and vacuums to residents of a New Jersey suburb.

But since opening this summer, the store has been targeted by a self-styled neighborhood watch group. The group has reported World of Appliances for violating “Blue Laws,” the prohibitions on retail activity designed to keep people in church on Sunday, and which are still in force on this small patch of the Garden State.

World of Appliances is now the first business to be reported for breaking a Blue Law in Mahwah, New Jersey, in at least ten years. Police have been called there three times since July. The store is unique for other reasons: It is Jewish-owned in a town being sued for discriminating against Jews. And, as it turns out, discrimination against Jews — Hasidic Jews in particular — was the watch group’s main objective.

“If [Hasidic Jews have] such blatant contempt for God then why would we ever expect them to honor Mahwah’s laws?” the group’s creator, Vince Crandon, wrote in August. “While my past experiences [with them] have been mostly business related, coming to my hometown has now made things personal.” 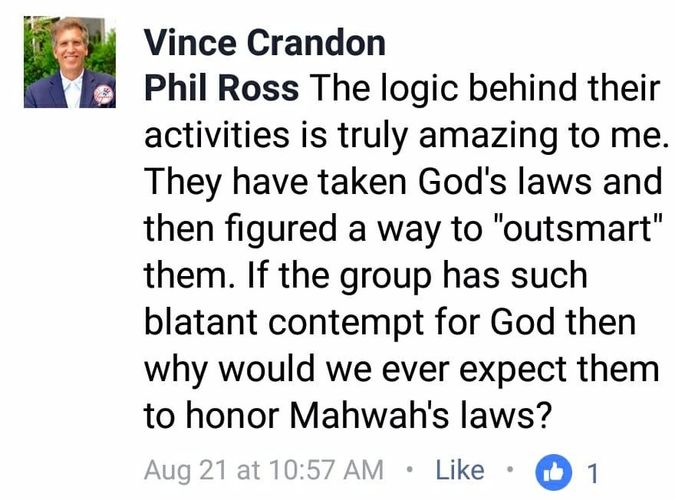 Crandon, a businessman who once attempted to buy a defunct casino in Atlantic City from a Jewish developer, founded “MahWatch” in July.

At a township council meeting that month, he described the group as a “community group of people… that are gonna look out for all of our community.” In posts on MahWatch’s Facebook page, however, Crandon made it clear that the group was created to keep Hasidic Jews — an ultra-religious, often insular wing of Judaism — out of Mahwah.

The owner of World of Appliances doesn’t live in Mahwah; indeed, no Hasidic Jews do, according to members of a nearby Hasidic community. But many live right across the border in New York, in towns with fast-growing Hasidic populations, such as Suffern and Monsey.

Mahwah residents have responded to a heightened presence of Hasidic Jews in the township of 25,000 by voicing fears of a “soft invasion” of the township, as one person wrote online over the summer.

The Mahwah town council then passed a rule effectively prohibiting the installation of an eruv, a ritual fence that Hasidic Jews require to carry objects outside their homes on the Sabbath. In October, the New Jersey attorney general sued the town and its council for discrimination, citing anti-Semitic comments on social media and resident meetings at which local organizers encouraged profiling of Hasidic Jews.

On three occasions since July, Mahwah police responded to complaints that World of Appliances was hosting customers on a Sunday. (The store has two other branches in New York.) In each instance, the responding officer noted that the business’ blinds were drawn.

Though the complaints were made anonymously, two township officials said they believe Crandon was behind the calls.

On one occasion, a call resulted in a complaint being filed against the store after an officer entered the store and found a sales representative showing merchandise to a family on a Sunday. It was the first Blue Law complaint filed in Mahwah in over ten years.

The calls appear to have been premeditated in Facebook comments made on the MahWatch page. 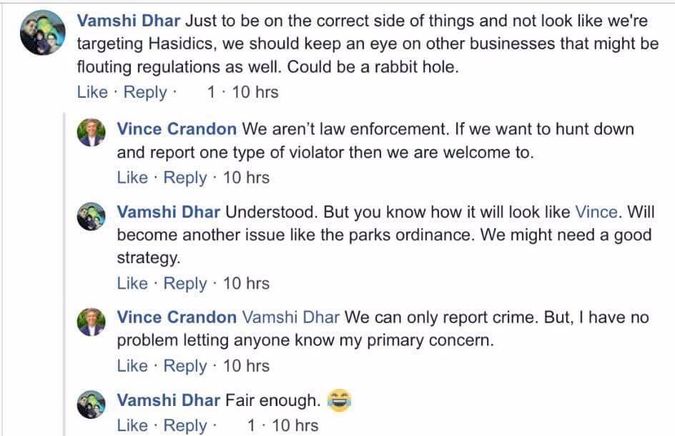 “Just to be one the correct side of things not look like we’re targeting Hasidics, we should keep an eye on other businesses that might be flouting regulations as well,” Vamshidhar Srikantapuram, a Mahwah resident, wrote on the page.

“We aren’t law enforcement,” Crandon responded. “If we want to hunt down and report one type of violator then we are welcome to.”

“I have no problem letting anyone know my primary concern,” he added.

(Crandon declined to answer questions about his involvement in the watch group. Joel Weiss, the owner of World of Appliances, did not respond to multiple requests for comment.)

Mahwah is one of several towns in the New York metropolitan area to see a strong backlash to the growth of local Hasidic communities. Communities in the Hamptons, as well as other neighboring towns, have touched off legal battles with administrators of area eruv systems. Leaders of Hasidic communities in New York’s Rockland County have been trying to extend the area’s eruv across a limited portion of northern New Jersey.

An eruv is made of plastic piping and thin wires, and often attached inconspicuously to utility poles. Orthodox Jews are not allowed to carry objects or push strollers outside their homes on the Sabbath. The eruv, an ancient legal loophole, symbolically enlarges the boundary of the home, letting one bring lunch to a neighbor’s house or go for a walk with the baby.

In each eruv controversy, the towns’ enforcement of certain rules or the implementation of certain ordinances — similar to Mahwah’s sign and public park rules — have been perceived as smoke screens for anti-Semitic sentiment. Observers have also tied Mahwah’s actions to a nationwide uptick in anti-Semitic activity.

“I don’t think you would have had the viciousness of Mahwah if it weren’t for the Trump-era aura,” Rabbi Shammai Engelmayer, former president of the North Jersey Board of Rabbis, told the Forward in October..

The Blue Laws that MahWatch intended to use to target World of Appliances have been on the books in New Jersey since the 18th century. When the state legislature voted to allow counties to repeal the laws in 1959, Bergen County, which includes Mahwah, kept them. In their current form, they prohibit the sale of a wide range of retail items, including appliances.

Though they are more strictly enforced in nearby Paramus, which has several major shopping centers, Bill Laforet, Mahwah’s mayor, says the laws are a low priority for the township.

“We just don’t really have the kind of businesses that would violate those laws,” he said, emphasizing that Mahwah does not have any clothing stores or toy stores.

With Crandon at the helm, MahWatch has engaged a mix of political advocacy, petty insults and doxxing. Ahead of election day he organized limousine service to ferry MahWatch members to the polls. He has tried to get signatures for a petition to force Laforet out of office. There is no evidence that the group ever organized a traditional neighborhood watch or ever reported the kind of criminal activity that community watch groups report, such as vandalism or burglaries. (In 2016 Mahwah was included in a list of the 100 safest cities in the U.S.)

The group also published the supposed IP address of the creator of a parody page, MahWatch Watch, which has published satirical articles and memes belittling Crandon and his group.

The founder of the parody group, who asked not to be named, said that though MahWatch purported to be focused on neighborhood safety, “in reality they were just using it as a front to focus on being anti-Hasidic and anti-Jewish.”

Some residents of Mahwah have reacted indignantly to the charges of anti-Semitic behavior. Laforet has defended the residents’ concerns. He pointed to Ramapo, New York, which received a designated state monitor in 2015 after years of allegations that the Hasidic community in the area had taken over the school board and favored the private yeshivas over public schools. He also cited the recent FBI sting on 26 ultra-Orthodox Jews in Lakewood, New Jersey, who were accused of defrauding Medicaid.

The town’s council has continued to draw criticism on other fronts as well. In late October, Insider NJ published a photograph of a recently elected council member holding a Confederate flag.

Mahwah’s council has signaled it will challenge the state’s lawsuit against it, allocating nearly $200,000 for legal fees for the town’s defense so far.

“So long as I sit in this chair, we will protect this town,” the council president said at a town meeting in late October.

Crandon, for his part, says he is discontinuing MahWatch, citing “personal grief to me and my family,” and has suggested he might leave Mahwah. He was not at the most recent council meeting — the first one he’s missed since July.

Laforet, the mayor, bemoaned how easy it was for Crandon to harness the fear and intolerance of some residents and target World of Appliances.

“How did this particular business come under such scrutiny by the hand of one person?” he added. “That’s the real conversation here.”