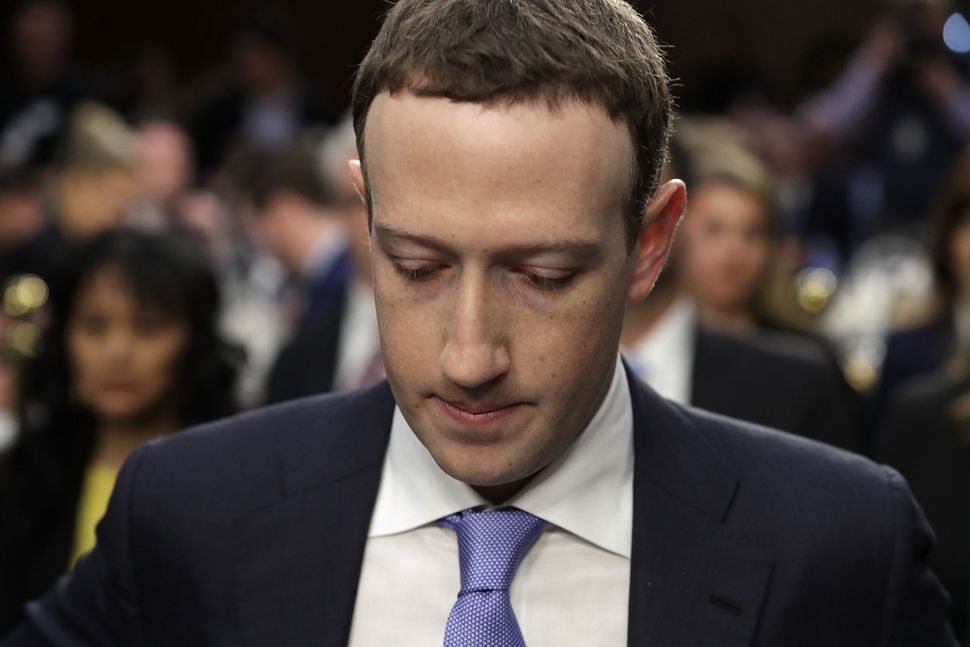 Watching Mark Zuckerberg testify to the Senate Tuesday with a clean-shaven face and dressed in a rarely-seen suit, one could be forgiven for thinking that the Facebook boss was delivering his Bar Mitzvah sermon — not addressing a high-stakes congressional hearing.

Zuckerberg has rarely been seen questioned in unfiltered public appearances, preferring instead to communicate through Facebook posts of himself and his family, most notably during his recent cross-country tour that some speculated was the beginning of a presidential campaign.

With his testimony, Zuckerberg sought to maintain a tricky balancing act: maintaining his public persona as a stereotypical Nice Jewish Boy while showing Congress that he has the strength to properly solve Facebook’s woes.

“It’s clear now that we didn’t do enough to prevent [Facebook’s] tools for being used as harm as well,” Zuckerberg said in his opening statement. “That goes for fake news, for interference in elections and we didn’t take a broad enough view of our responsibility. And that was a big mistake, and it was my mistake, and I’m sorry.”

The statement under the glare of national television cameras was reminiscent of his post-Yom Kippur message of atonement apologizing for Facebook “being used to divide people.”

Whether his apology will do any good in the eyes of the public and the political world is an open question.

Zuckerberg was also slammed by Sen. Ted Cruz (R-Texas) for allegedly censoring users and pages with conservative viewpoints. “To a great many Americans, that appears to be a pervasive pattern of political bias,” Cruz said.

Sen. Kennedy: “I don’t want to have to vote to regulate Facebook. But by God, I will. A lot of it will depend on you.” pic.twitter.com/tulxe58tPc

Zuckerberg’s testimony could be the most significant test of both his company and his own image as a whiz kid tech guru.

Many still refer to Zuckerberg using the boyish nickname “Zuck” – and the mogul even chose it as the URL for his personal Facebook profile.

But those who have followed Zuckerberg over the years caution against viewing him as a harmless boy wonder. They say everything he does is carefully crafted, even his solemn and stilted-sounded demeanor on Capitol Hill.

“The whole premise is absurd,” Kara Swisher, one of the most respected journalists in Silicon Valley, wrote on her website Recode. “Mark is now an adult man with two children and a longtime partner who took his company public and runs what is now one of the most powerful companies in tech.”

Ironically, whether Zuckerberg can win back a skeptical public — and fend off government regulation of Facebook — could hinge on one of his least favorite activities: public speaking.

Swisher had presided over Zuckerberg’s most disastrous public appearance, an infamous 2010 panel discussion where a conversation about user privacy left the hoodie-clad Zuckerberg stammering and slathered in sweat.

In fact, Zuckerberg’s shy and introverted nature nearly ruined his crucial 2004 meeting with Peter Thiel, the first venture capitalist to invest in the site.

“We weren’t blown away by Mark Zuckerberg’s pitch, as we recalled,” LinkedIn co-founder Reid Hoffman, who was at the meeting, recounted in a recent podcast. “Back then there was a lot of staring at the desk, not saying anything.”

Swisher also added that Zuckerberg’s slow responses to Facebook’s issues with fake news, Russian election interference and data theft “allow[ed] the platform he built to be misused and abused by bad actors by his lack of policing the system he put in place.”

“Mark screwed up here, that much is clear, and he now needs to both atone and fix it,” she said.

Because he controls 60% of Facebook’s voting stock, Zuckerberg essentially runs Facebook unfettered and without dissent, which is not true of other tech giants like Apple and Alphabet (Google’s parent company). As the Atlantic’s Franklin Foer pointed out on Monday, even in a Silicon Valley culture where employees embrace their employers with cult-like adoration, Facebook stands out for its limited culture of acceptable internal dissent.

So any changes Facebook makes will be coming from Zuckerberg himself. That adds to the importance of making his message compelling and believable to the average American.

Aside from meeting with heartland farmers and oil drillers to understand their plight, Zuckerberg has used his Facebook perch to show himself lighting Shabbat candles with his daughter.

Zuckerberg, once an outspoken atheist, has been increasingly open about his embrace of Judaism. He even said when delivering Harvard University’s commencement address last year that he sings Debbie Friedman’s “Mi Shebeirach” prayer for healing to his daughter and recites it to himself.

It’s for these and other reasons that he’s been hailed as a “Nice Jewish Boy” by sources as diverse as BuzzFeed and Aish HaTorah.

Such an ‘NJB’ is “studious and gentle,” Daniel Boyarin, a professor at the University of California, Berkeley and the author of “Unheroic Conduct: The Rise of Heterosexuality and the Invention of the Jewish Man,” told the Forward.

The persona was created by Jews centuries ago to contrast themselves with Gentiles, but then used by Gentiles to denigrate Jews, who were seen as weak and hysterical. But it’s very much alive today, Boyarin said.

Zuckerberg has already had his NJB-ness weaponized against them in the dark corners of the white nationalist internet. The accusation that Facebook discriminates against conservatives has led him to be called a “cuck,” an emasculating epithet that serves as a dog-whistle harkening back to the ancient stereotypes.

Jewish feminists have also warned that the stereotype of the NJB is an illusion wielded by men to hide their innate selfishness. That’s a trait that may be familiar to business foes who stood in the way of Zuckerberg on his way to turning Facebook into a global giant.

Will Zuckerberg wind up being despised by both anti-Semites and a big chunk of the world’s ordinary citizens? After all, as Boyarin noted: “Jews have been accused of shark [business] practices going back centuries.”

It depends on whether Zuckerberg can mollify Congress and assure billions of ordinary Facebook users that their privacy is safe. Doing that will require at least one more engagement he is sure to dread – an appearance on Wednesday, this time testifying before the House of Representatives.