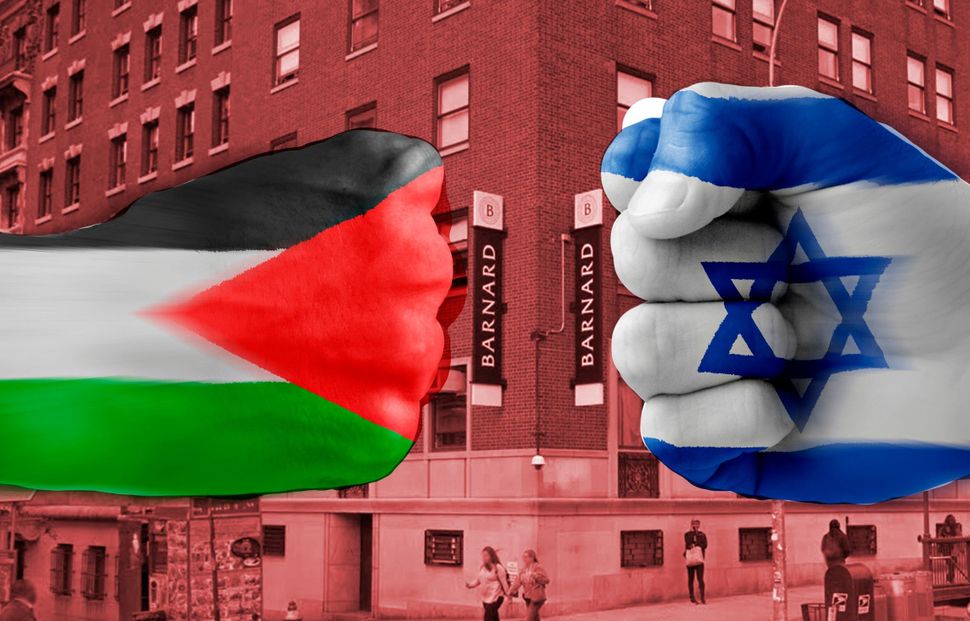 As the end of the school year approaches and the temperature rises, so are tensions at the most Jewish college in the United States.

Last week, Barnard College students voted in a referendum to divest from eight companies that do business in Israel. Anti-occupation groups were exultant; pro-Israel organizations devastated. Then the administration unilaterally rejected the referendum, infuriating the student government, which hadn’t had a chance to act. Now everyone’s angry.

Barnard President Sian “Beilock totally overrode the democratic process due to pressures or external things that we cannot and do not know about, and now we’re only left to guess, and it sucks,” said student Lili Brown, a senior affiliated with referendum sponsor Jewish Voice for Peace, to the Forward.

Barnard and Columbia University have long been hotbeds of political activism. As prospective students trailed tour guides through the Manhattan campuses on Tuesday, they could have seen two separate protests – a sit-in to have 24/7 medical services, and a large-scale rally by the union of graduate students. One speaker warned passers-by that if TAs go on strike because of their poor pay and benefits, “We will not help you in labs.”

There was no visible sign of the divestment referendum, which had historic turnout of nearly 50%. Most campaigning is done online or one-on-one because rules limit flyers, Brown said.

After a weeklong voting process ending April 18, Barnard students voted 64%-36% to ask the Student Government Association to petition the school’s Board of Trustees to divest from eight companies, such as Boeing and Hyundai, that allegedly violate international law through their work in Israel. Next, the student government was supposed to vote on whether to formally request the school to divest.

Such initiatives have often ended in a school administration’s decision not to follow the student’s recommendation. In this case, though, the activists behind the referendum thought they might have a chance of prevailing, because the school had already divested from some companies on political grounds.

“Last year Barnard agreed to divest from companies that deny climate change in response to a student referendum with a mere 24% turnout,” Jewish Voice for Peace and Students for Justice in Palestine pointed out in a statement released Tuesday.

The result was especially notable because Barnard is an estimated one-third Jewish – though the fact that many Jewish students campaigned and voted for divestment was not a surprise to Brown, who is Jewish herself.

“Now when all the coverage is saying, ‘Whoa, Jewish students made this happen,’ I think that is completely true,” she said. “But it would be wrong to say that we weren’t also influenced and in collaboration with Palestinian students who brought this process to us.”

Shortly after the vote tally was announced on Thursday – also the date of Israel’s Independence Day – pro-Israel members of the Barnard community got to work. Within days, more than 2,000 Barnard students and alumni signed a petition calling on Beilock not to divest.

“BDS is a hateful movement that pushes peace further away and stifles discussion through a misleading and one-sided portrayal of the conflict in the Middle East,” the petition said. Among the signatories included at least two members of the Board of Trustees.

On Monday, hours before the SGA was expected to vote, Beilock made the statement, formatted as a letter to the SGA.

“You are of course free to continue your discussions on this issue, but it would be misleading to not provide you with clarity on the College’s thinking prior to the SGA discussions on this topic that I understand will take place this week,” she wrote. “For any referendum related to Barnard’s endowment to be considered by the Board of Trustees, it should meet two exacting standards”: relating to Barnard’s mission, and reaching a communal consensus. “The referendum you are currently considering does not meet these two standards.”

Beilock argued that there was not a consensus because only around 30% of the entire student body had actually voted in favor of divestment due to non-universal turnout.

That didn’t fly with Brown.

“You can’t use a lack of participation as an argument,” she said. “That’s just not how the democratic process works.” She pointed out that far fewer than 100% of the country had voted for Donald Trump, but he was president anyway.

SGA leaders were also furious at Beilock, who was inaugurated as president only in February.

“Regardless on where one stands on the issue at the heart of the referendum we feel strongly that we all should be disturbed by the fact that the president knowingly undermined student voices and SGA’s process,” Vice President for Policy Alicia Simba said in a SGA hearing on Monday, according to the Columbia Spectator, the student newspaper.

SGA members said that they had tried to meet with Beilock after the email, but were left unsatisfied.

“We were summarily dismissed. President Beilock said there was no discussion to be had about her email,” Vice President for Finance Evelyn McCorkle said, according to the Spectator. “I am concerned about the new precedents that are being set by this president, and how she interacts with student government, and how she responds to the student body.”

The outrage from student leaders means that the issue may now have broader ramifications.

Does it distract from the original issue? “Absolutely. And it’s totally unfair.”

Similar events have happened at other universities where BDS campaigns were waged. After student elections at the University of Minnesota called for divestment last month, university president Eric Kaler released a 450-word statement expressing his opposition. And after George Washington University’s student government passed such a resolution on Monday night, university president Thomas LeBlanc said as much in six short sentences.

To be sure, some students have welcomed Beilock’s stance.

“I can understand why [pro-Palestinian activists] are displeased with the letter,” Ofir Dayan, a leader of Students Supporting Israel, told the Forward. “But I also really appreciate Barnard’s president for making a clear statement saying that hate is not acceptable on their campus. And I think it’s really important, and I wish more faculty members and professors would make the same statement.”

The SGA is reportedly still weighing its options, as are pro-Palestinian activists still hopeful that divestment could happen.

Activists on both sides had prioritized the referendum campaign over their schoolwork. Now, as students are slammed with catching up on old assignments and preparing for upcoming finals, it’s unclear how much pro-Palestinian student activists can do before people go home for the summer.

“We have to wait for what SGA decides to do,” Brown said. “There’s a lot at stake for SGA right now.”