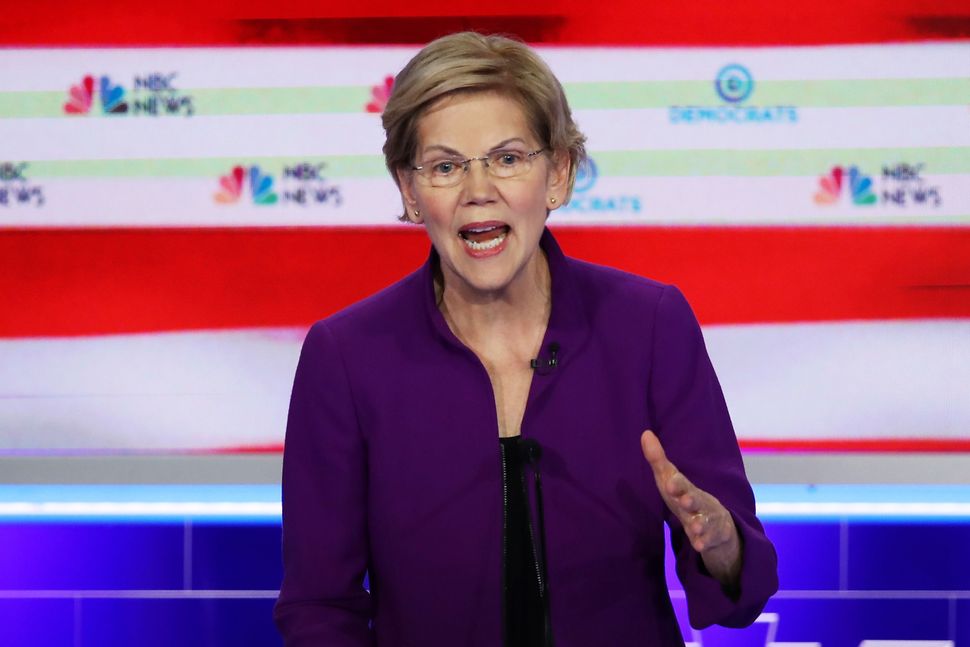 WASHINGTON (JTA) — In the waning days of 2018, Sen. Elizabeth Warren, D-Mass., formally declared her interest in running for the presidency.

Warren was not the first to do so — former Maryland Rep. John Delaney has for months been canvassing for Democratic votes in Iowa, the first caucus state — but Warren is the first “much discussed” Democrat to formally enter the 2020 stakes. Warren on Friday was headed to Iowa.

Why “much discussed?” The former Harvard Law professor is known as a champion of consumers, having established the Consumer Financial Protection Bureau in 2011 under President Barack Obama. That boosted her profile and helped propel her to retake her state’s Senate seat in 2012.

She claims Native American heritage (although she has acknowledged that this is short of the tribe membership that is the benchmark most Native Americans require), and has tussled over the issue with President Donald Trump, who calls her “Pocahontas.” (She gives as good as she gets, having called Trump, among other things, a “small, insecure money-grubber.”)

She’s known as a relentless questioner in committee hearings, earning herself a Kate McKinnon “Saturday Night Live” parody. Warren in 2017 read a letter on the Senate floor from the late widow of Martin Luther King Jr., Coretta Scott King, describing Jeff Sessions, then a nominee for attorney general, as a racist.

The Republican leader, Sen. Mitch McConnell, R-Ky., invoked a little-known rule barring the impugning of fellow senators (Sessions was still at the time the senator from Alabama), and in one of the most outstanding political own goals in recent times, he handed liberal feminists a slogan for the decade, when he chided Warren, saying he warned her to desist, but “nevertheless, she persisted.”

Warren, 69, also occupies the same populist, income equality territory staked out by Sen. Bernie Sanders, I-Vt., in the 2016 election, when he mounted a surprisingly strong challenge to the eventual nominee, Hillary Clinton, becoming the first Jewish candidate to win major-party nominating contests in the primaries. If Sanders, who will be 79 in 2020, declares in the next month or so, expect a food fight on the party’s left, and among its New Englanders.

Warren has a close relationship with Massachusetts’ organized (and substantial) Jewish community. Here are some highlights:

Warren is a progressive on Israel…

Warren accepted the endorsement of J Street, the liberal Jewish pro-Israel policy group, and has joined Sanders, who has become a lead critic of its current government’s policies, in some of his initiatives. She was one of 10 senators to write Israeli Prime Minister Benjamin Netanyahu not to demolish Palestinian villages in the West Bank.

At the launch of at times violent Palestinian protests on Israel’s Gaza border, she urged Israel to show restraint.

“I am deeply concerned about the deaths and injuries in Gaza,” Warren said. “As additional protests are planned for the coming days, the Israel Defense Forces should exercise restraint and respect the rights of Palestinians to peacefully protest.”

Warren voted for the 2015 Iran nuclear deal that J Street championed and that Netanyahu and the American Israel Public Affairs Committee vigorously opposed. She did not show up to listen to Netanyahu’s controversial March 2015 speech to Congress aimed at shutting down the emerging deal.

…but she will defend Israel against her base.

Warren faced down an angry progressive at an August 2014 town hall in Cape Cod. The man was furious that Warren had voted for additional funding for Israel’s Iron Dome missile defense system during Israel’s Gaza war with Hamas the same summer.

“When Hamas puts its rocket launchers next to hospitals, next to schools, they’re using their civilian population to protect their military assets. And I believe Israel has a right, at that point, to defend itself,” Warren said.

She showed up for Shabbat

After an anti-Semitic gunman gunned down 11 worshippers in a Pittsburgh synagogue on Oct. 27, Warren joined a national Jewish initiative to “show up for Shabbat” and spoke at Temple Emanuel in Newton, Massachusetts.

She led the “Prayer for Our Country,” the Boston Globe reported.

“This act of pure evil was an attack on the Jewish community not just in Pittsburgh, but all across our country,” Warren said. “Anti-Semitism is at the root of so many vile and hateful acts. The danger anti-Semitism poses is real and tangible.”

Warren also decried the vandalism in 2017 of a Boston Holocaust memorial.

She thinks the “alt-right” is all wrong

Warren has been outspoken in criticizing what she sees as white supremacist influence on the Trump administration.

“The President of the United States should condemn bigots, @realDonaldTrump,” she said on Twitter in November 2016 when Trump announced that Steve Bannon, who is close to the alt-right, would be a senior adviser. “Not give them a West Wing office to decide our country’s future.”

(Bannon was out within a year, in part because Trump’s Jewish daughter, Ivanka, objected to his far-right associations.)

She’s down with Jewish advocates for immigration

Congress, separate from the executive, does not suffer from government shutdowns, and so lawmakers often will pledge their salaries to worthy causes during the period.

Government is shut down now because Trump does not want to sign a funding bill until Congress earmarks $5 billion to build a wall with Mexico to stop the flow of migrants. Warren pledged this week to give up her wages and chose an immigration advocacy group that opposes Trump’s immigration restrictions as her beneficiary: HIAS, the lead Jewish group dealing with immigration issues.

“Over 7,000 people in Massachusetts have been sent home or are working without pay during the #TrumpShutdown,” Warren said Tuesday, New Year’s Day, on Twitter. “Until @realDonaldTrump re-opens the government, I’m donating my salary to @HIASrefugees, a nonprofit that helps refugees and makes our country stronger in the process.”