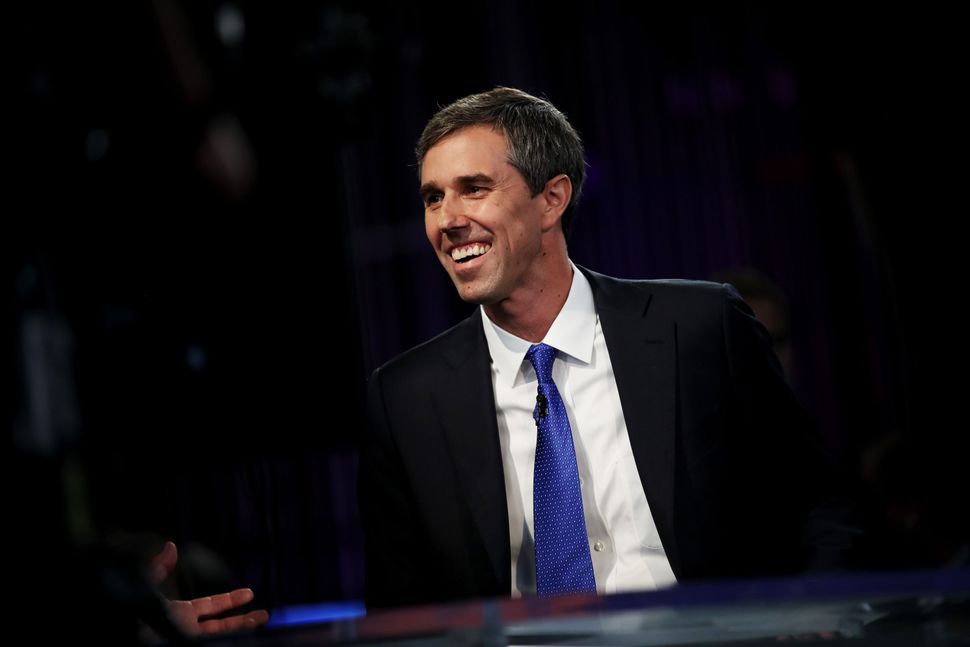 Former Texas congressman Beto O’Rourke speaks to the media in the spin room after the first night of the Democratic presidential debate on June 26, 2019 in Miami, Florida. Image by Drew Angerer/Getty Images

O’Rourke, a Roman Catholic, has clashed at times with the local Jewish community, particularly his vote in 2014 against funding for Israel’s Iron Dome rocket defense system. He also has reportedly claimed to have some Jewish roots.

He reportedly once said that he has Jewish roots.

Since we’re a Jewish news agency, we just had to start with this one. O’Rourke spoke in 2004 about having “some Jewish ancestry” in a meeting with local pro-Israel activists after the Iron Dome vote. JTA was not able to find other accounts or confirm with his campaign. O’Rourke has Irish and Welsh ancestry — his family came from Ireland to the U.S. four generations ago. If we find a Jewish ancestor somewhere far back in his family tree, we’ll let you know.

In 2014, O’Rourke was one of eight House members to vote against funding for Iron Dome.

His vote stood out because he was among a small group of lawmakers to oppose the $225 million aid to Israel, which was dealing with a barrage of rockets from Gaza amid a military operation. Meanwhile, 395 members of the House voted for the aid. O’Rourke’s vote angered many in the local Jewish and pro-Israel community; some circulated letters expressing their dismay. O’Rourke explained that he did not oppose funding for the Iron Dome, but rather the fact that there had not been a debate about the spending. Eager to make amends, the congressman later met with local pro-Israel activists and Jewish community leaders.

The following year, he visited Israel.

O’Rourke was part of a delegation of Democratic lawmakers organized by the liberal Middle East policy group J Street. They met with Palestinians and Israelis, and visited Jerusalem’s Old City and Yad Vashem. O’Rourke talked about the trip at Congregation B’nai Zion, a Conservative synagogue in El Paso, saying it gave him hope for peace. He addressed the challenges faced by Israelis living under rocket fire.

“I was looking at the border wall as though I was in Chihuahuita looking at Mexico and talking to people who lived in that village and what they experienced this last summer and learning from them how they literally watched rockets arching over their heads, northbound,” he said, according to the El Paso Times. “And not too long after, they would see missiles and fire coming right in the other direction over their heads.”

But O’Rourke said he would not have voted differently on funding for the Iron Dome in 2014 because he believed the topic merited debate.

“I think our unequivocal support at times has been damaging to Israel,” he said, according to the Times.

Ted Cruz attacked him for his ties to J Street.

O’Rourke’s Senate opponent called the policy group “rabidly anti-Israel” and claimed that O’Rourke had accepted money from its political action committee despite saying he did not accept money from PACs. It turned out that the J Street money came from individual donors who gave by way of the PAC, so O’Rourke’s claim still held true.

Interestingly, Cruz’s attack shed light on the fact that O’Rourke picked up plenty of such conduit contributions through J Street. In the 2018 election cycle, he received $182,000 distributed by the PAC, the third largest amount of any politician after Democrats Dan Kohl, who unsuccessfully ran for Congress in Wisconsin, and Sen. Tammy Baldwin, also of Wisconsin, according to Open Secrets.

He has compared Central American migrants to Jewish refugees in World War II.

In expressing his support for immigration, O’Rourke has drawn parallels between the two groups. He repeatedly invoked the MS St. Louis, a ship carrying more than 900 Jewish refugees from Germany in 1939 that was turned away from the United States and Canada. Many of the passengers later died in concentration camps. O’Rourke has made the analogy in social media posts and in some speeches.

He said this in a call-to-action published on Medium:

“I know that every single one of us, to a person, if we were standing here in this Chamber in 1939 when this country was sending back the St. Louis, which had set sail on May 13, 1939, from Hamburg, Germany, with more than 900 German Jewish refugees, including children, that all of us, to a person, would like to say, if I were here, I would have made the case to accept the St. Louis and those 900 passengers and make sure that they could find refuge and asylum in this country.”

The current migrant crisis, O’Rourke continued in urging the passage of a bill to end family separations at the border, is “our moment of truth.”