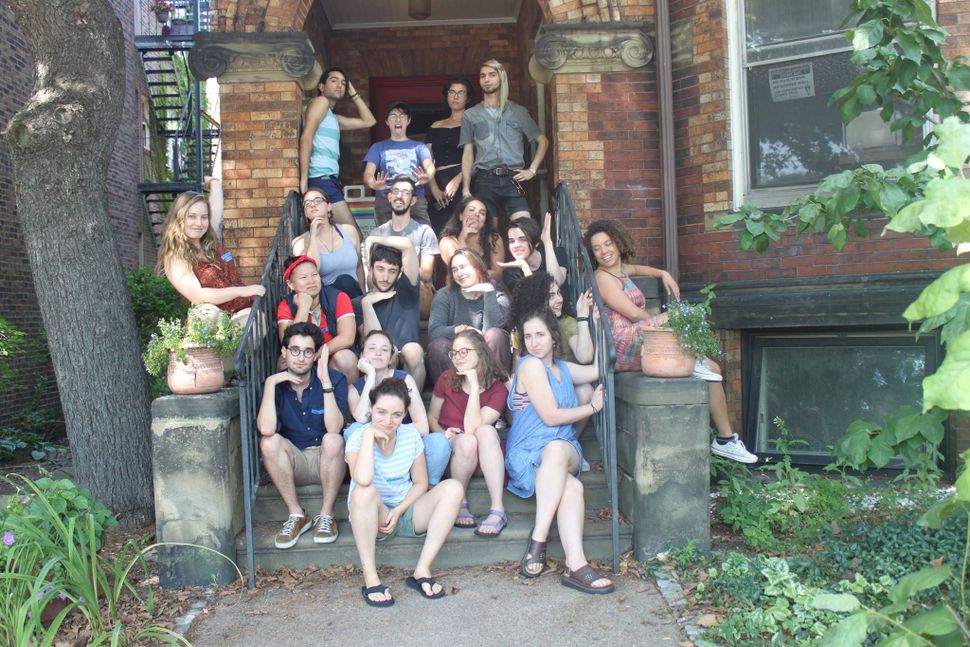 Brown University junior Hal Triedman is a leader of an independent prayer group called Friday Night Jews, but he doesn’t know exactly how it started, since it was founded before he arrived on campus.

He’s pretty sure it had something to do with a few students being upset with the local Hillel, the main Jewish campus center – though now many of the people who attend Friday Night Jews’ services, which has grown this year to be 35-50 regulars meeting in dorms for biweekly potluck Shabbats, are also heavily involved in Hillel too.

The group’s vision, Triedman says, is “an alternative space, and one that is explicitly pluralistic, and it’s not explicitly Zionist or anti-Zionist or non-Zionist, just reserved for people to have unfinished thoughts and work through things together.”

Earlier this month, Triedman and other students officially launched “Judaism On Our Own Terms,” a network of 14 (and counting) independent Jewish student groups like Friday Night Jews — student-led, grassroots-funded, and explicitly welcoming of people regardless of their views on controversial topics like BDS, the movement to boycott Israel. They released a guide advising students how to start their own clubs, and have a private Facebook page where students can share tips and motivation.

The clubs in the network are political and spiritual homes for people either looking for a periodic alternative to Hillel, or are outright alienated by the major group’s stance: officially welcoming of Jewish students who support boycotts of Israel, but banning the groups they’re in that advocate for them.

“Having a national network…there’s a positive feeling that others are doing the same thing you’re doing,” said Amanda Feinberg, a junior at Bryn Mawr College and a leader of Bryn Mawr & Haverford’s Bi-Co Jews for Inclusion.

Hillel International, the umbrella organization for Hillels around the world, did not respond to a request for comment.

Last month, many JOOOT groups held alternative Seders over Passover – and the Facebook page was useful in sharing Haggadah suggestions, said network organizer and Barnard College sophomore Avital Raff. At Northwestern University, the Jewish Progressive Alliance’s Freedom Seder had over 100 attendees, including many black, Latino and Palestinian-American students. Such a Seder could not be held at Hillel because it was co-sponsored by a chapter of Students for Justice in Palestine, which supports BDS, the boycott-Israel campaign.

The independent groups themselves don’t have positions on boycotting the Jewish state, just that they’re welcoming of students who support it. “We don’t take a stance because we want anyone to feel like they can join,” Feinberg explained.

Networks of anti-establishment independent Jewish student groups have been tried in the past, explained Karla Goldman, a professor of Judaic studies and social work at the University of Michigan. A coalition in the 1960s famously led a sit-in at the Council of Jewish Federations’ General Assembly in protest of an “entrenched Federation system” that they didn’t think reflected the priorities of Jewish youth. Members of the network, who were also active in the Havurah movement of independent Jewish prayer circles, also created “The First Jewish Catalog,” a DIY guide for everything from building a sukkah to hitchhiking in Israel, which sold half a million copies between the 1960s and 1980s. The Catalog inspired some of the art in the JOOOT guide.

But that network eventually disbanded, and two efforts to replicate it, both called the American Union of Jewish Students, quickly faded away after attempted revivals in 2004 and 2017.

In a Facebook message to the Forward, Misha Vilenchuk, the AMUJS president during its 2017 relaunch, declined to comment on JOOOT, but was able to identify flaws that sunk his group’s efforts, including infighting, lack of financial resources and professional assistance, poor communication between leaders spread throughout the country and difficulty maintaining momentum over summer vacation. “We largely failed because we couldn’t build the trust of students[,] and student movements are difficult to maintain,” he wrote.

Despite the inauspicious precedents, Feinberg was optimistic, pointing out that many JOOOT groups are already established on their campuses, and many leaders are on the younger side so “it won’t just die off when the founding people graduate.”

JOOOT was built out of a conference organized last summer by Open Hillel, the advocacy group pushing for Hillel to end its anti-BDS standards.

Some network members are more focused on the politics and can be antagonistic towards their local Hillel – Princeton University’s Alliance of Jewish Progressives, for example, protested outside a Hillel Shabbat dinner last month because they felt an “Israel Shabbat” wasn’t inclusive of students who oppose Israeli policies.

But others, like Friday Night Jews, are more focused on the spiritual and don’t delve into Middle East issues much, if at all. And many individual members of both kinds of JOOOT groups still frequent Hillel events.

The rise of independent campus groups reflect the growth of Millennial-powered organizations like IfNotNow and Jewish Voice for Peace that are vocal about their opposition to Israeli policies and what they see as the American Jewish community’s stifling of dissident voices.

“It’s not just lefty Jews, but a lot of it is that,” Feinberg said of the campus groups’ membership.

Multiple other organizers listed another reason their groups were growing: Discomfort with Hillel’s mega-donors and their alleged influence over the organization.

Triedman pointed out that major Hillel donors like Home Depot co-founder Bernie Marcus also are generous backers of President Trump. (Hillel has said that such donations do not affect programming or personnel decisions). Triedman also pointed to the case of Michael Steinhardt, the Hillel benefactor accused of serial sexual harassment.

Since they’ve cut themselves off from Hillel’s funding, the JOOOT groups have to find alternative revenue sources. Much of the work so far has been through crowd-funding or out of their own pockets. The guide offers tips for how to get grants to hold Shabbat dinners; the first suggestion is OneTable – an organization funded by the Steinhardt Foundation for Jewish Life.

“To escape [the donors] is very difficult,” said Goldman.

She also said that despite the claims of detractors, most Jewish students think that Hillel does welcome people of every religious, cultural and political Jewish identity. So JOOOT’s target audience might already be small, limiting future growth.

But Triedman, who said he didn’t expect to be involved in a Jewish community at all before joining Friday Night Jews, said that students like him are looking for alternative perspectives: “I think it would be incredible if we lived in a world where prospective Jewish students were going to an open Shabbat or a meeting of an independent Jewish group, and say, ‘Wow, I really like this group, it seems like a place for me, I should apply to this college.’”

Correction, May 20: A previous version of this article stated that Hal Triedman is the leader of Friday Night Jews. In fact, the group does not have any formal titles or hierarchies.