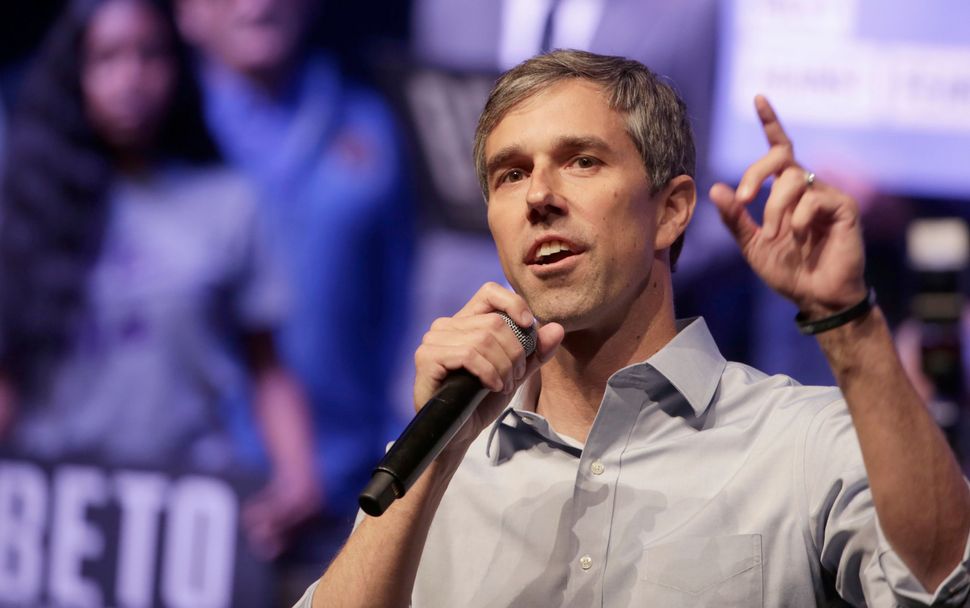 O’Rourke, the former Texas congressman trying to turn around dwindling poll numbers and back-of-the-pack fundraising reports, this week repeatedly compared President Trump’s rhetoric and policies to those employed by Adolf Hitler, a trope he has used off and on since at least April.

But O’Rourke has not faced the same backlash from Jewish leaders as Rep. Alexandria Ocasio-Cortez of New York did when she invoked the Holocaust by calling migrant detainment centers along the Mexican border “concentration camps” this summer.

There are a lot of possible explanations for the diverging responses. Ocasio-Cortez, the young, Democratic firebrand who shocked the establishment by unseating a veteran in the 2018 House primary, is a media magnet, while O’Rourke is struggling for attention in a crowded field. She made her comments when the migrant crisis was the No. 1 news story, while his remarks came as most attention was on impeachment and the Kurds.

But some observers see hypocrisy in the critics of Ocasio-Cortez who said nothing about O’Rourke, perhaps based on her affiliation with the so-called Squad, four leftist first-year female members of Congress whose positions on Israel seem to be under special scrutiny.

Yonah Lieberman, one of the founding members of the leftist Jewish group IfNotNow, said that if leaders of establishment Jewish groups like the Anti Defamation League and the American Jewish Committee “truly believed that what AOC was saying was anti-Semitic, then they would be out there on the front lines” now about O’Rourke. (Lieberman, for his part, has no problem with either analogy. “What he is saying is not anti-Semtic, and what AOC was saying is not anti-Semitic,” he said in an interview.)

But Rabbi Abraham Cooper, who wrote a scathing op-ed about Ocasio-Cortez’s concentration camp comments, said his silence on O’Rourke is not about hypocrisy, just relevance. He said he had not heard much about O’Rourke’s Nazi Germany comparisons, though they came on two nationally televised news shows, on MSNBC and CNN, last weekend, and were reiterated in The Washington Post.

He said that in the case of Ocasio-Cortez, the combination of the seriousness of the detainment crisis, coupled with the gravity of her comparison, made it an issue that had to be “dealt with immediately.”

“Those are life and death issues, and if you misuse the Shoah, you can cloud those issues,” he said, using the Hebrew term for the Holocaust. ”You make it more difficult to come up with consensus to actually help people.”

In comparison, more general Nazi Germany analogies like O’Rourke’s are more likely “a mark of a candidate’s desperation,” Cooper said.

O’Rourke’s first comments along these lines — creating a parallel between Nazi anti-minority propaganda and Trump’s language about immigrants and people of color — came in April, and earned some ire, primarily from the Republican Jewish Coalition. In July, he compared a Trump rally to the infamous Nazi party meetings at Nuremberg. He repeated the analogy in speaking to Al Sharpton on MSNBC Saturday, and then defended his words in an appearance on The Situation Room, on CNN, with Wolf Blitzer.

On Wednesday, speaking to The Washington Post’s Robert Costa, he backed his comparisons up.

“Outside of the Third Reich, give me another example of a Western leader who has called one people of one faith inherently defective, or dangerous and disqualified of being successful in that country,” O’Rourke said of Trump’s so-called “Muslim ban.”

Kyle Kondik, managing editor of Larry Sabato’s Crystal Ball — a respected political newsletter from the University of Virginia’s Center for Politics — said that references to Nazi Germany are a familiar rhetorical cudgel and “historical crutch,” used by both Democrats and Republicans.

“It comes up in American politics all the time,” he said, because politicians “realize that most people know the Nazis and know that they were bad, and maybe don’t know references to other regimes of human history.”

Trump himself has invoked the Third Reich.

Intelligence agencies should never have allowed this fake news to “leak” into the public. One last shot at me.Are we living in Nazi Germany?

Yet experts on anti-Semitism and the Holocaust argue that making such analogies cheapens the memory of atrocities like the Holocaust, and, as the historian Deborah Lipstadt told Haaretz this summer regarding Ocasio-Cortez’s comments on migrant detainment centers, “gives those responsible for these outrages a chance to wriggle out from the avalanche of justified attacks on their policies.”

Abraham Foxman, a Holocaust survivor and former leader of the Anti-Defamation League, noted in an interview: “Democracy is being weakened, challenged, battered, but nowhere near what happened during the Nazi period.”

There are significant differences in the comparisons that O’Rourke and Ocasio-Cortez made, including their timing. O’Rourke’s latest comments come as the country — and the news media — is focused on the impeachment inquiry against President Trump, Ukraine and the plight of the Kurds in Syria. Ocasio-Cortez made her comments, via Instagram Live, in mid-June, at the height of the national interest in the migrant crisis at the border.

O’Rourke has also been more frequent and more emphatic in tying Trump’s America to Hitler’s Germany.

In his latest comments, speaking to the Post, O’Rourke made it clear that he believes it is a real possibility that the United States could go the way of German society in the 1930s.

“When people in Charlottesville, Virginia, were talking about ‘Jews will not replace us,’ President Trump said they were very fine people,” he said. “If we fail to connect the dots, and draw the conclusion, then we’re gonna die in our sleep as a country.”

O’Rourke’s campaign staff did not respond to a list of emailed questions, instead only highlighting the above quote.

But while O’Rourke has been clear about what he sees as signs of Nazism, Ocasio-Cortez perhaps touched an even more emotional nerve in drawing connections to the Holocaust and the systematic imprisonment and murder of millions of Jews.

“The United States is running concentration camps on our southern border, and that is exactly what they are — they are concentration camps,” she said in June. “And if that doesn’t bother you … I want to talk to the people that are concerned enough with humanity to say that we should not, that ‘Never Again’ means something.”

For her historical analogy, Ocasio-Cortez got hit hard: by Yad Vashem, Israel’s Holocaust museum; by Lipstadt; even by Bernie Sanders, an otherwise steadfast supporter of the congresswoman. She also received some support from left-wing groups.

“She was a flashpoint,” Foxman said. “She attracted a lot of attention, so people looked at what she said under a microscope.”

Ocasio-Cortez’s office also did not respond Thursday to an emailed list of questions.

O’Rourke and Ocasio-Cortez have both been critical of Israel, yet have received different levels of attention from pro-Israel figures and politicians. O’Rourke had a significant flare-up with supporters of Israel during the 2014 Israel-Gaza war, after he voted against temporarily increasing aid to the Israeli military. But after meeting with representatives from the pro-Israel lobby AIPAC, as well as his own Jewish constituents in El Paso, he began softening his criticisms of Israel. (Though only somewhat — this year he called Israeli Prime Minister Benjamin Netanyahu “racist.”)

Ocasio-Cortez has similarly called Netanyahu a Trump-like figure, and has said that cutting aid to Israel is “on the table.” But Ocasio-Cortez has not given her public support to the Boycotts, Divestment and Sanctions movement that seeks to economically isolate Israel. She has, however, been targeted for her views on Israel in part by association, via the Squad, with Reps. Ilhan Omar and Rashida Tlaib, who are both Muslims, fierce critics of Israel’s occupation of the West Bank, and supporters of the boycott movement.

Indeed, Pro-Israel America, a political action committee that supports pro-Israel candidates, recently sent out an email soliciting donations to help beat Ocasio-Cortez, who enjoys strong support in her district, in the 2020 elections.

Jews and pro-Israel groups’ differing comfort levels with the two Democrats may explain the disparate responses to their statements, Lieberman said. He argued that staunch Jewish Zionists and Republicans are more focused on undermining Ocasio-Cortez and other members of the “Squad” because those politicians have helped shift the conversation among Democrats away from unquestioning support of Israel.

Yet the Republican Jewish Coalition insists that both O’Rourke and Ocasio-Cortez are in the wrong.

“I don’t think there’s a meaningful difference between those comments,” said Neil Strauss, the RJC’s national spokesman. “They’re both set up to try and denigrate the president and his supporters as Nazis. And it’s patently absurd.”

When asked if there is an event occurring today that could be likened to the Holocaust, Strauss said that reports about what is happening to the Uighur Muslim minority in China could be considered comparable.

Stuart Schwartz, an El Paso attorney and former head of the city’s Jewish Federation, as well as one of the people who spoke to O’Rourke about his Israel military aid vote, said that he has not heard O’Rourke’s Nazi comments discussed extensively in the local Jewish community.

Though he had not spoken out against O’Rourke’s comments, Schwartz, who has visited migrant detention camps on the border, said he feels the comments were actually less appropriate than Ocasio-Cortez’s comparison.

“I certainly understand his frustration over the president’s policies, because I share those frustrations,” Schwartz said. “I just don’t know that you can compare it” to the Nazi regime’s actions.

O’Rourke’s comments come as he has fallen well behind in the race for the Democratic presidential nomination. He drew support from 3% of respondents to a recent CNN poll,, and is in 10th place for overall fundraising this year, according to FiveThirtyEight.

Foxman mused that O’Rourke’s Nazi comparisons may be a way to get his base excited again, by riling people up about the Trump administration. But if it is, Foxman said, it’s a bad strategy.

“It’s the wrong way to galvanize,” he said. “It’s bad enough this administration exaggerates. So the critics have to exaggerate?”