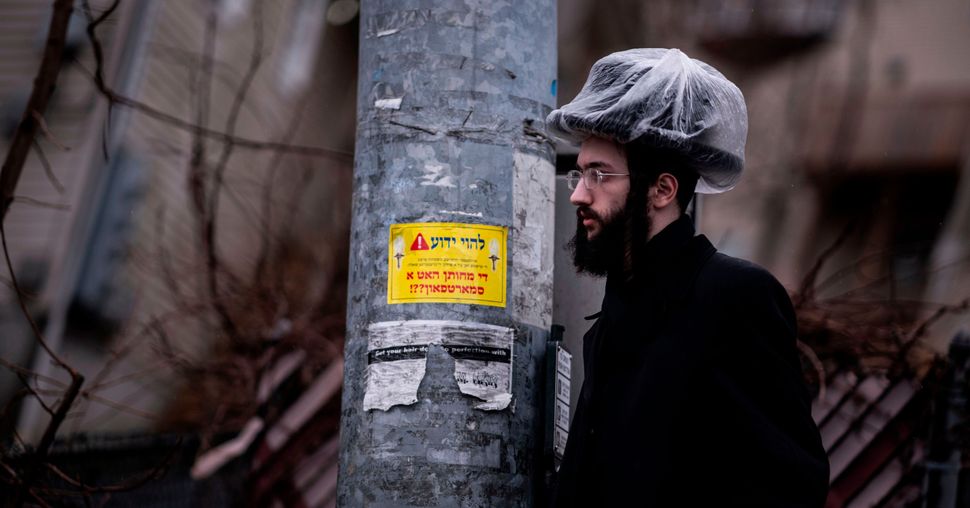 A Hasidic man in Monsey, New York. Image by Getty

MONSEY, N.Y. — Last week, the phrase on the lips of many Jews in Rockland County, New York, was “hate crime.”

Just before 6 a.m. on Wednesday, a man jumped out of a car on a quiet residential street in the heart of Monsey, the suburban Hasidic haven, and repeatedly stabbed a father on his way to shul for morning services, gauging his eye. Images of the man’s blood on the ground reverberated around the Internet: Though such violent, seemingly anti-Semitic attacks are frequent occurences in the Orthodox enclaves of Brooklyn, no one could remember such an incident in Monsey, which is not only insular but also more isolated.

By Sunday, the community was whispering about the case with a new watchword: yad Yisrael ba’emtza — the hand of Israel is in the middle.

Translation? The person responsible for this is a Jew.

In this dense, tight-knit hamlet of approximately 22,000, facts and misinformation have intermingled and moved like lightning through WhatsApp chat groups. A new narrative about the stabbing has emerged that closely resembles the plot of an episode of “The Sopranos.” The fact that the police have not issued any updates in the case only fuels the fire. (A dispatcher for the Ramapo Police Department said Monday that the department would not comment beyond what it has already posted to social media.)

The attack, in this entirely crowd-sourced and evidence-free telling, involves a marriage gone wrong, a case of mistaken identity and a car set aflame.

“I don’t care, God forbid, if it was one of the crazy rumors,” said Rivkie Feiner, the chief executive of a nonprofit consulting group and a longtime resident of Monsey. “I want them to catch whoever it was.”

The rumors had begun circulating before the Shabbat candles were lit on Friday; over the weekend, many people in town could talk of little beyond possible motives for the attack and the status of the victim. Orthodox media have reported that he is stable at an area hospital after undergoing several surgeries; the Forward was unable to contact members of the family.

All through Shabbat, the subject of the attack “didn’t go off the table,” said David, 47, after finishing a grocery run at Monsey Glatt Kosher on Sunday. “If it’s a hate crime,” he added, “it means everyone’s a target, and that’s frightening.”

David was one of many residents in the area who spoke on the condition that their last names not be published, citing privacy issues. And one of several shoppers who had plenty to say about the attack.

Miriam, who is 33 and lives in nearby Airmont, said that when she moved to the area, “they said it was so safe, you don’t need to lock your doors. I am starting to rethink that.”

On Tuesday morning, Orthodox media and Twitter accounts lit up with reports that the FBI and local police were conducting raids in Monsey, which they speculated was related to the “inside job.” But early media reports are suggesting that the target of the raid was an alleged bank robber who lives nearby in Spring Valley. The robberies do not appear to have any connection to the stabbing.

Police choppers are flying above Monsey, officers are seen going from door to door in the area where the stabbing occurred.#MonseyStabbing

The victim of the stabbing, whose name has not been publicly released, was on his way to pray at Tashnad Hall, a building in the heart of “old Monsey.” It is a neighborhood where there are still plenty of midcentury houses mixed in with the multi-family condos that have been sprouting in recent years to accommodate the burgeoning Hasidic community.

Tashnad has a synagogue for prayer and study and a banquet hall for hosting wedding receptions and vorts, engagement parties. It has baroque features: a stone reproduction of the tablets Moses brought down from Mount Sinai, a mural depicting yeshivas and synagogues that were destroyed in the eponymous town of Tășnad, Romania, not far from the birthplace of the Satmar Hasidic dynasty. 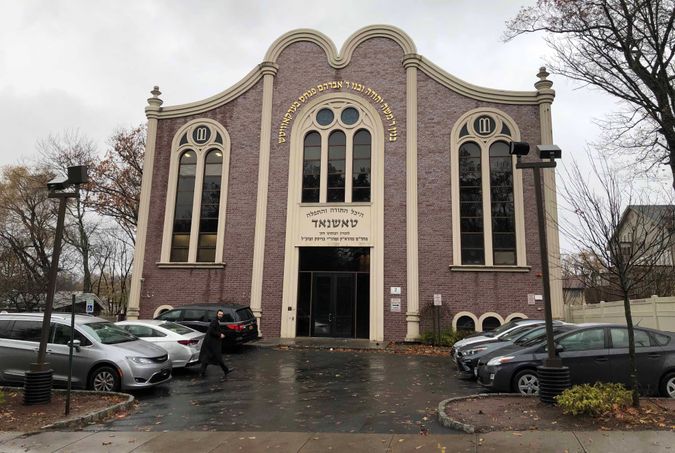 Tashnad Hall, the banquet hall and synagogue near which the victim was stabbed. Image by Ari Feldman

One of the people hanging out at Tashnad on Sunday, Heshy, 24, said he had read on social media that the attack was ordered by a wealthy man, possibly a jeweler, whose son-in-law refused to grant his daughter a divorce, which women in some Orthodox communities cannot obtain without the husband’s permission. The wealthy man had hired a non-Jew to kill the son-in-law, the theory went, but the hitman had mistakenly stabbed the son-in-law’s neighbor.

“That’s the conspiracy,” Heshy said. “I don’t know what is true. Time will say.”

While Heshy was talking, a middle-aged man came down the stairs of Tashnad’s main entrance. The older man spoke no English, and asked Heshy in Yiddish what he was doing. As Heshy explained the situation, he repeated the Hebrew phrase “Yad Yisrael ba’emtza.” It can be found in commentaries on the Talmud, and it is a popular phrase among Yiddish-speaking Jews for when a Jew is involved in unsavory business.

Others coming into Tashnad for the afternoon prayer service had read the same tweets, spread via screenshots on WhatsApp, and heard the same story.

“It looks like it’s not a hate crime,” said Yosef, 23. When asked if he thought the level of rumor-mongering was unusual, he said, “The whole story is unusual.”

When the attack was first reported, it seemed on its face to be part of a growing spate of hate crimes targeting Jews in the New York area. A 30-year-old teacher was stabbed multiple times just down the block from his house of worship. The assailant’s car, witnesses said, appeared to have been driving around the neighborhood for some time beforehand — as though, it seemed, on the hunt for an Orthodox victim.

The Anti-Defamation League quickly announced a $10,000 reward for information leading to the attacker’s arrest. That afternoon, Gov. Andrew Cuomo of New York announced on Twitter that he was directing the State Police Hate Crimes Task Force to assist in the investigation.

To many Jewish leaders, local residents, and people who have followed controversies about the expansion of the Orthodox communities in Rockland County, it seemed at once shocking and inevitable.

In August, the Republican party here released an ad called “A Storm Is Coming,” which accused county legislator Aron Wieder, who is a Hasidic Jew, of helping plot an Orthodox “takeover” of the area, threatening “our homes, our families, our schools, our communities, our water, our way of life.”

James Foley, who was recently elected as a county legislator in the area, made campaign signs reading “Block the bloc,” an apparent reference to Hasidic Jews voting as a bloc, and citing the “Ramapo Mafia.” (Monsey is a hamlet in the city of Ramapo.) The ad and the campaign have been accompanied by vitriolic anti-Jewish statements on social media as well, residents say.

That, alongside the continuing attacks on visibly Orthodox Jews in Brooklyn, meant that Hasidic Jews here were primed for a hate crime, Feiner said.

“It used to be Europe, and then Brooklyn, and things unfortunately creep into Monsey, to Rockland,” she said. “So of course that was the fear. That trajectory is what led to that conclusion.”

But local police announced at a press conference the day of the attack that they were not investigating the attack as a hate crime, puzzling — and upsetting — some Orthodox community members, who sounded off in the comments of articles in the Orthodox and Yiddish-language media about the stabbing.

And so the rumors began. One was that someone was impersonating police and members of Chaverim of Rockland, a local volunteer organization of emergency responders, and trying to delete footage of the assailant’s vehicle taken by private security cameras.

Monsey: Urgent! If your were approached in the last hour by someone other then Rockland chaverim or Police for footage of yesterdays stabbing, call 911 right away! There is someone going around impersonating police and deleting footage from cameras!

On Saturday night, a video of a Honda Pilot in flames on a street in a non-Jewish area of Spring Valley, the town just east of Monsey, was posted to Facebook. It was picked up by a Twitter account that identified it as the Honda Pilot being supposedly sought by police. Later, a picture of a charred black SUV on a flatbed trailer was disseminated via WhatsApp as well, as proof that the vehicle was in police custody.

“Both can’t be true,” said Yossi Gestetner, the co-founder of the Orthodox Jewish Public Affairs Council, a group that uses public records and demographic information to counter negative narratives about the Orthodox community. “It can’t be that this is the Honda Pilot that’s being looked at by law enforcement, and then it’s just sitting in a civilian garage.”

On Sunday morning, one of the social media accounts that spread the apparent video of the Honda Pilot jokingly belittled the police investigation, saying investigators were “trying to scratch together some details about the stabbing in Monsey when Whatsapp already has the whole story with names.”

The Ramapo police have pushed back against the rumors.

“I am aware of much of the chatter which has been on-going on social media and in the community regarding the stabbing and assault in Monsey this past week,” Brad Weidel, the chief of police, said in a statement posted to Facebook Sunday. “I reiterate my original remarks made at the press conference—that RPD has no evidence to support the legal requirements of a hate crime in this case.” 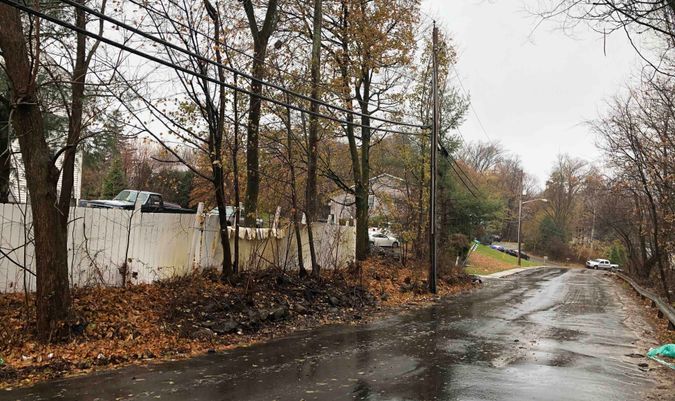 The place in Spring Valley where the car burned. Image by Ari Feldman

A common misconception about Hasidic Jews is that they broadly eschew technology and the Internet. In fact, WhatsApp is very popular here in Monsey, and according to Gestetner, the theories have moved so quickly through Rockland’s Hasidic Jews because people have dozens of friends, family, fellow congregants and co-workers to share messages with.

“There are many sects and subsects that are very adamant against people using social media,” he said. “But there are many people who are members of sects where it’s not such an important issue. So information comes and goes.”

Until arrests are made and charges made public, the community is nervously waiting for answers.

“It would be amazing that it’s not a hate crime, on the one hand,” Feiner said. But, she added, “Whatever happened, it broke our feeling of safety. That’s how I feel about it, whatever it was.”

Update, 11/26/19, 2:45 p.m. — This story has been updated with information about the Tuesday morning arrest of an alleged bank robber in Spring Valley.