Of Herzl, Einstein, Chagall and George Kennan: Memories of working with YIVO’s librarians 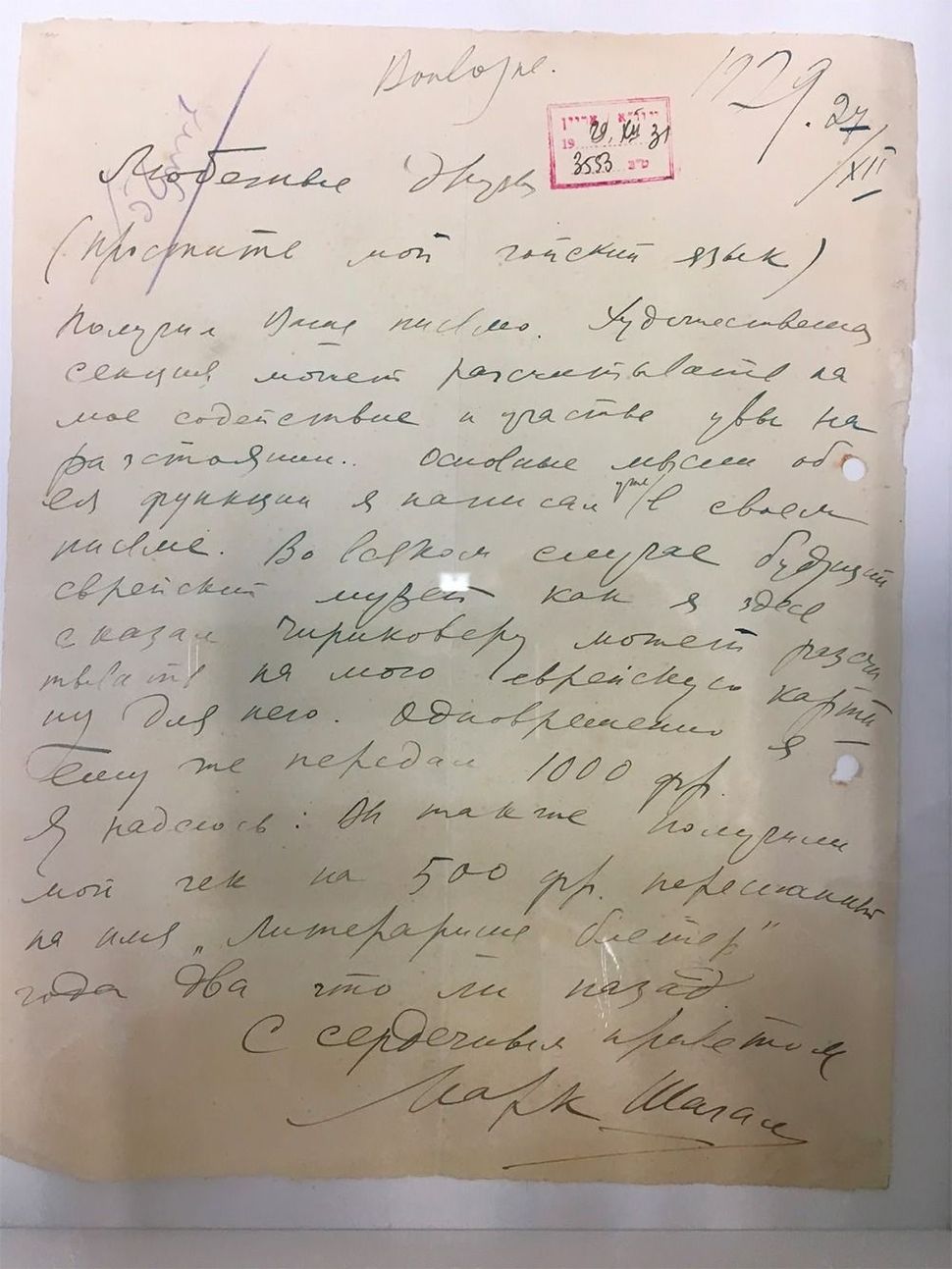 A letter from Marc Chagall. Image by Deborah Lipstadt

The YIVO Institute for Jewish Research is the world’s preeminent center for the study of Yiddish language and culture. Founded in Vilna in 1925, YIVO is now based in New York and includes an academic center, an archive with 23 million item, and a library with 400,000 books.

On Monday, that YIVO’s board, facing a shortfall of $550,000 in its general operating budget, had laid off all four of its librarians. Some 1,200 scholars and students have since signed a letter urging the board — whose 15 members include two who also sit on the board of the Forward — to reinstate the librarians.

We asked some of the people who know YIVO best to share a personal story about its beloved library. (If you have an anecdote to add, please do so in the comments.)

‘Something in hand that she knew would interest me’ 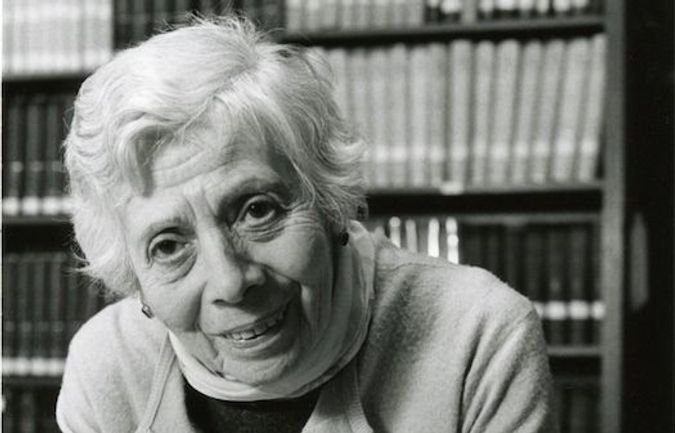 The first time I visited the YIVO library was in 1967. It was a dreary winter day, with pale sunlight drifting through the windows of a ballroom of the Vanderbilt mansion at 86th Street. With a bank of card catalogues at one end of the room, walls lined with shelves of reference works, and readers at tables in the rest of the space, I had the feeling I was in Europe, not New York.

The doyenne of this domain was Dina Abramowicz, a petite and modest woman of inestimable knowledge of the greatest collection of books in Yiddish and other languages on the history and culture of East European Jews. She had been part of YIVO in Vilnius, survived the Holocaust, and carried on the great YIVO tradition of supporting scholarship.

Neither the card catalogue nor the electronic databases that supplanted it could offer what Dina could give to the researcher, novice and experienced alike. She not only knew what was in the collection and where to find it, but also she would bring you material you knew nothing about – and she did so with utmost generosity of spirit. I would arrive to the library, and there would be Dina, with something in hand that she knew would interest me without my even asking.

‘You are going to see something amazing’

For the last five or so years, I have taught a summer course on “Research Methods in Yiddish Studies,” where I introduce students to the treasures of the YIVO collections. I would request a long list of reference books from Lyudmila Sholokhova – rare Soviet Yiddish publications, obscure dictionaries of Yiddish place names, unpublished bibliographies found only at YIVO. No matter how busy she was with her many other duties, Sholokova — known as Mila — would run from her office to the reading room to the stacks gathering the materials and present them to me, ready and waiting on a library cart, with a smile.

Fruma Mohrer, an archivist, would sometimes come with a cart of items, including Herzl’s diary, letters from Einstein, and humble notebooks from schoolchildren studying math in Yiddish. She would say to the students, “You are going to see something amazing” – and they did. But I also told my students that of all the resources at YIVO, the most important were the staff members with their decades worth of knowledge that cannot be found in any book or website.

A letter from Marc Chagall 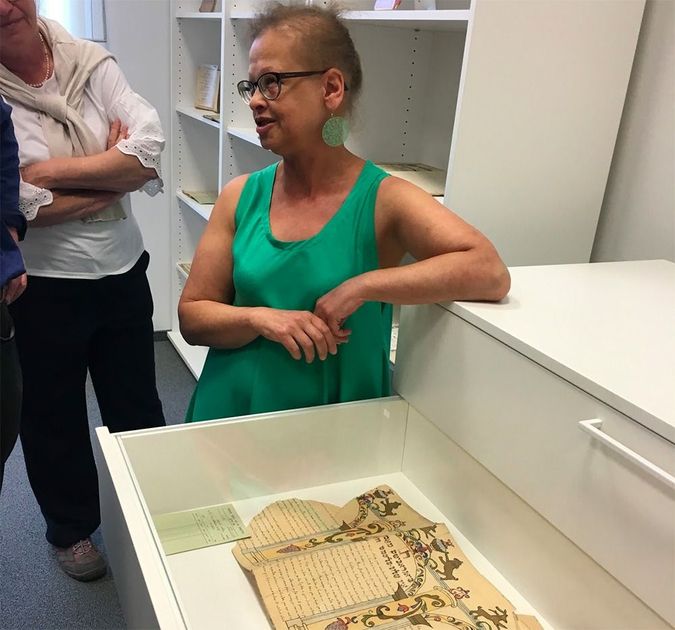 I visited Vilnius with a group of scholars for a conference about 18 months ago. The most exciting and memorable part of the conference was not the papers, but our visit to the Vilnius national library, which is in possession of a number of documents from YIVO’s earliest collection. The amazing librarian there, Lara Lempertiené, organized a small exhibit for us and among the papers was Marc Chagall’s letter (in Russian) agreeing to be on the board of the newly formed YIVO. A YIVO without librarians is hardly a YIVO at all.

Using email to make the archive a global resource

Except for a few spans during summers, my career has not been based in New York. YIVO’s librarians have made the archive a national and indeed global resource. Not only does my email archive show how helpful they have been to me from afar over the years, but their knowledge base has made time spent on-site in the reading room far more efficient.

On a trip to YIVO in 2015, I was looking for a needle in a haystack: I knew that Zuni Maud had drawn a magnificent cartoon to accompany a Chelm story in some issue of Kinder zhurnal, and I wanted the image for the cover of my first book. But the periodical started publishing in 1920 and continued for more than five decades, and Maud lived until 1956.

There was now way to do it but to start in 1920 and flip through issue after issue, until I found the drawing in question. The librarian on duty mentioned that while touring in Europe and the Soviet Union (1929-31), Maud was unlikely to have contributed. In an instant and through expert librarianship, three years were shaved off the haystack.

Citing relevant works ‘off the top of her head’ 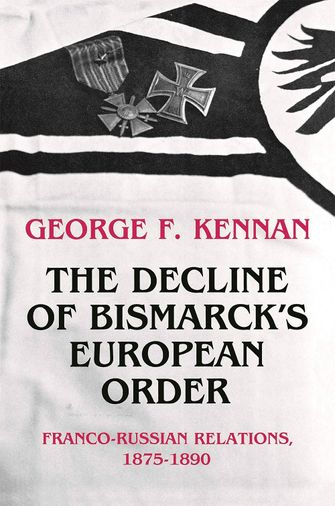 The Decline of Bismarck’s European Order

I was in the reading room of the old YIVO Library on Fifth Avenue when the legendary American diplomat and historian George Kennan paid a visit circa 1978.

He was working on his book “The Decline of Bismarck’s European Order: Franco-Russian Relations, 1875-1890” (1979), and was looking for sources on a very conservative, Jewish-born convert (and physiologist) Élie de Cyon (1843-1912), a native of Telšiai (Telz, Lithuania), whose name he had come across in his research.

Kennan sat for at least half an hour with Dina Abramowicz, YIVO’s Head Librarian from 1962 to 1987. She referred him to Yiddish books by Saul M. Ginsburg and Samuel Leib Zitron about Jewish apostates in Tsarist Russia, and offered to translate passages where Cyon was mentioned. That Dina was able, off the top of her head, to cite these works testified to her extraordinary expertise and memory.

I like to think that Kennan must have been intrigued by his encounter with Dina, a contemporary of his who was raised in the Russian-speaking home of Jewish intellectuals in Vilna, during the same years that he was studying Russian while serving as a junior diplomat in Riga (not far away).

Zachary Baker Retired in 2018 from Stanford University Libraries (Worked at YIVO, including as head librarian, 1976-1999)

It is hard for me to provide one particular anecdote or one particular date. I have been using the YIVO library for 40 years. The YIVO library has always been different from some other major research libraries in the area in that the staff actually knew not only the holdings but also the subject matter. They were able, therefore, not only to retrieve items, but to guide researchers in the right direction. Daniel Soyer Professor of History Fordham University (former YIVO student and staff member)

She ‘taught me what my exhibit could be’

I had the idea of having a small exhibit of Bais-Yaakov-related material from YIVO in the lobby at my book talk at the Center for Jewish History. Eddy Portnoy, who worked in the education department, introduced me to Lyudmila Shokolova, the library’s director and YIVO’s associate director for external relations with Eastern Europe and Russia. .

In her crowded office, Lyudmila worked for me, over the course of weeks, to select material from the library and archive, write captions, and arrange the exhibit. After years spent writing more-or-less alone (though always with the support of YIVO’s archivists and librarians), this collaboration was enormously rewarding.

Lyudmila showed me journals I had only seen in microfiche, found books I had missed in my research, and taught me what my exhibit could be. Just as my book was entering the world, she helped me see clearly how much of it depended on the generosity and knowledge of librarians like Lyudmila, who get so little credit for the scholarly enterprise they make possible. Naomi Seidman Chancellor Jackman Professor of the Arts University of Toronto

‘She shares what and whom she knows’

Rather than a musty interaction involving a tome or two or three, my love, admiration and respect for YIVO’s (suddenly ‘former’) library director, Lyudmilla ‘Mila’ Sholokhova, covers two decades of mostly emails. A digital trail flowed between us, routinely, the way telephone calls and telegrams used to. To peek inside them is to hear me claiming I’m doing my best to be honest about why we need permission to publish a YIVO image, or how we need to flip through an archival file box or two and publish our findings, immediately, and with limited funds.

The emails express deadline panic—and my desperation at trying to act as un-barbarian as possible in the face of my utterly cultivated Kievian colleague.

Sholokhova is among the world’s experts on the Ansky expedition, that pioneering Ashkenazi Jewish ethnographic moment. Without it, maybe Yiddishists and Yiddishland wouldn’t exist. Her generosity of spirit, collegiality and low-pitched but strong networking skills extend around the globe to other research facilities I wouldn’t necessarily have relationships with — if not for her. She shares what and whom she knows.

Researchers such as Sholokhova don’t blow in everyday. They’ve given their lives in service of Jewish literacy. Sholokhova forever.

Of Herzl, Einstein, Chagall and George Kennan: Memories of working with YIVO’s librarians