Extremist activity is growing in the pandemic. How worried should Jews be? 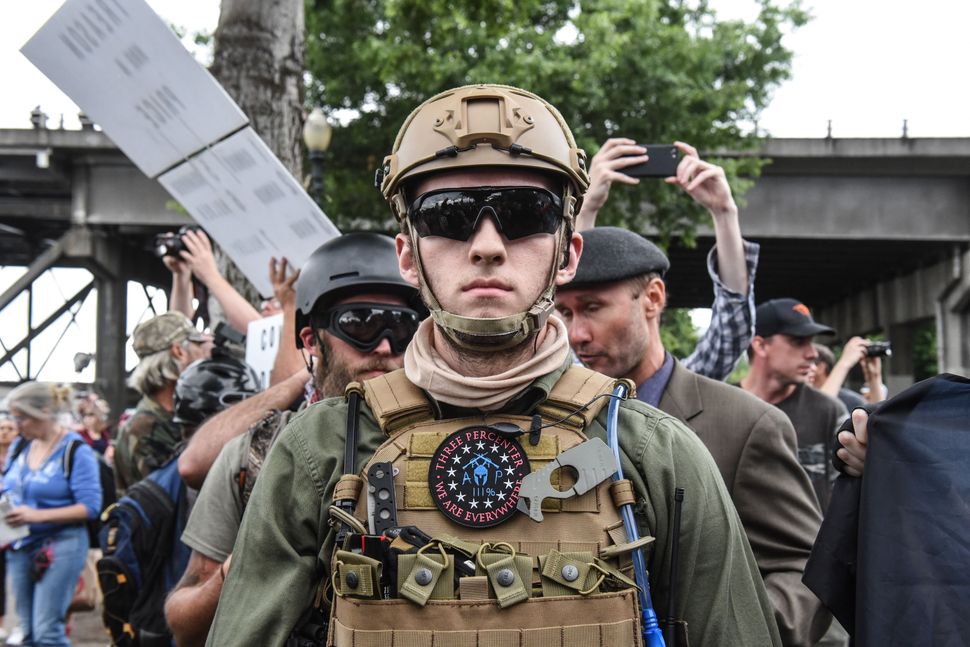 Three Percenter at a Portland rally. Image by Getty

The accused murderer’s manifesto was filled with anti-Semitic sentiments, but it also contained another element: The shooter’s wish that his actions would lead the government to start confiscating guns, and thus provoke a “civil war” between white nationalists and everyone else.

“If this revolution doesn’t happen soon, we won’t have the numbers to win it,” the alleged murderer wrote. “Stop the slow boil of the frog. Make the Jew play all of his cards to make it apparent to more people how their rights are being taken away right before their eyes.”

This idea is called accelerationism — and over the past two years, its popularity has jumped dramatically in online extremist communities, tied to their excitement over anti-Semitic attacks. In the last month, accelerationist extremists have grown increasingly active, in response both to the pandemic and the anti-racist protests sparked by the killing of George Floyd.

Experts worry that, as these groups become more brazen, they will carry out physical, violent attacks against minority communities — especially Jewish ones.

Civil unrest and economic decline “may induce individuals to plan and undertake targeted attacks as our facilities reopen,” said Michael Masters, the CEO of the Secure Community Network, the Jewish community’s largest provider of security training and policy. “That is a reality.”

The most prominent accelerationist group to come out of the pandemic so far is called the Boogaloo Boys, a complex, anti-establishment movement that researchers say is not strictly tied to anti-Semitic sentiment — but whose propensity for violence may have cascading effects for all minority communities, including Jews.

“Boogaloo” is internet extremist slang for a second civil war. Though the term and its meaning have existed for years, the group has exploded onto the national scene over the past six months. Their members have been seen at protests and political rallies over the past several weeks, in their trademark Hawaiian floral shirts under bulletproof vests, often armed with assault rifles. Various Boogaloo groups have different political philosophies, but all of them seek the armed overthrow of the government.

Members of the movement use the Boogaloo as “a meme that fantasizes about a violent uprising against the state, and violence waged towards the law enforcement community and government officials that they perceive as an enemy,” said Alex Goldenberg, a lead intelligence analyst at the Network Contagion Research Institute, a Princeton-based group that studies online extremism.

While the movement is not inherently anti-Semitic, there are white supremacists and neo-Nazis on its fringes, Goldenberg said. Paul Nehlen, a white supremacist in Wisconsin who mounted two unsuccessful campaigns for Congress, has posted a picture of himself wearing a shirt emblazoned with the face of the Poway shooter over the word “BOOGALOO.” The Anti-Defamation League reported last year that a white supremacist group shared lyrics to a song called “Do the Boogaloo” on an encrypted group chat, with lines like “Kill the kikes and save the whites” and “Plug a pig and then a Yid.” 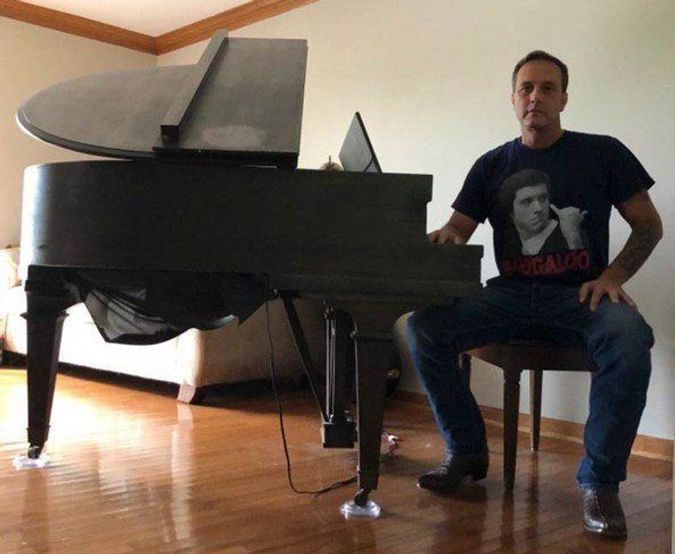 Paul Nehlen, a white supremacist and far-right figure, wearing a shirt with a picture of the Poway shooter over the word “BOOGALOO.” Image by Courtesy of ADL

The past few months has seen two alleged Boogaloo Boys face charges for murder and attempted murder of federal agents, and three other men arrested for allegedlying trying to firebomb a Black Lives Matter protest. On Thursday, a chat platform shut down a Boogaloo server over extensive threats of violence.

“They have shown that they’re willing to cross a line and use firearms for their beliefs,” said Thomas Holt, director of the School of Criminal Justice at Michigan State University. Holt said he was concerned that other groups who admire the Boogaloo Boys’ efforts might try to replicate their success (and current media attention) by targeting Jews.

The Jewish community is already plenty on edge after four deadly attacks in two years, which have caused the deaths of 17 people: the Tree of Life synagogue massacre, in Pittsburgh; the Poway shooting; the Jersey City, N.J. shooting; and the machete attack in Monsey, N.Y.

Other incidents, less deadly but no less dangerous or traumatizing, are also on the upswing. FBI data found that violent assaults against Jews grew from 2017 to 2018. In its audit of anti-Semitic incidents of 2019, the Anti-Defamation League counted 61 total anti-Semitic assaults that year, a more than 50% increase from 2018 — even though only 13% of all anti-Semitic incidents were carried out by people with ties to extremist groups.

Online anti-Semitic activity was already trending upward before the pandemic, but since it began, it has spiked even further, researchers say. A report from the Institute for Strategic Dialogue, a London think tank, found that online communities that shared both COVID-19 disinformation and “race war” propaganda also shared media and messages linking Jews and Muslims to the creation of the coronavirus.

A growing number of Internet users are also sharing more conspiracy theories about the Jewish financier George Soros, blaming him for allegedly creating the coronavirus and accusing him of “staging” Floyd’s killing.

The current situation, with millions of people unemployed or otherwise stuck at home with nothing to do but surf the web, “has created a funnel” to extremist organizations, said Jason Blazakis, director of the Center on Terrorism, Extremism, and Counterterrorism at the Middlebury Institute of International Studies at Monterey. 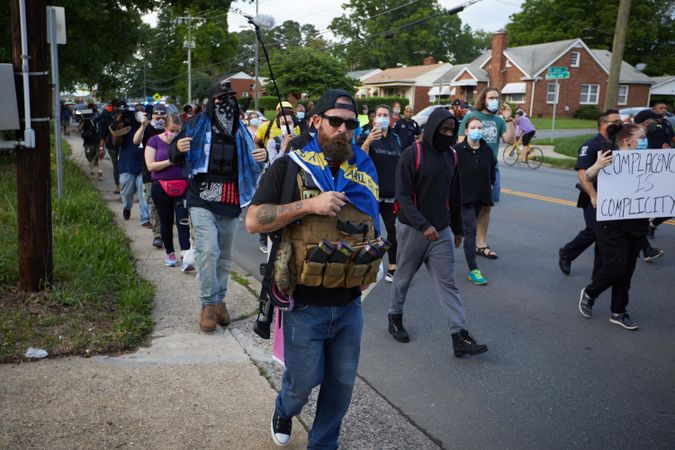 A member of the Boogaloo Bois walks next to protestors demonstrating outside a police building just outside of downtown Charlotte, North Carolina, on May 29, 2020. Image by Getty

People radicalized by exposure to anti-Semitic conspiracy theories, as well as angered or scared by the unprecedented state of the country, may grow to support the accelerationist theory, supported both by violent white nationalist groups and the Boogaloo Boys, that only armed violence (against the government, or against Jews) will make things better.

Some veteran white nationalist leaders have long expressed concern that the “optics” of violent uprising ultimately hurt their movement — consider how many racists were arrested or lost their jobs as a result of the 2017 Charlottesville white nationalist march. But all it takes is one exception: Before killing 11 Jews, the Tree of Life shooter posted online, “Screw your optics, I’m going in.”

“We’re seeing the growth of the accelerationist wing, which openly embraces terroristic violence as a political tool, because the question of optics now holds far less weight,” a Southern Poverty Law Center researcher wrote on Tuesday.

Security experts worry that some of the newer recruits may feel they have something to prove — and that they’ll go after the people considered the most ambitious target: Jewish communities who they think control global events.

“The Jewish community is the primary target of all the hate and all the anger and all the conspiratorial thinking that goes along with this,” said Amarnath Amarasingam, a professor of religion at Queen’s University in Ontario, Canada, who studies terrorism and radicalization. “If any of these guys tip over into violence in a real sense, the Jewish community is always top of mind as a potential target for a lot of these people.”

How concerned should the Jewish community be?

Law enforcement appears to be deeply attuned to these groups’ activities. FBI probes have already this year resulted in the dismantling of The Base, and the Atomwaffen Division, two violent white supremacist groups. Law enforcement agencies now list “white supremaicst extremists” under “High” in their threat assessment reports, while jihadists threats are marked “Low.”

And while there have been several right-wing terrorist plots mounted against Jewish communities over the past year — an attempted bombing of a synagogue in Pueblo, Colo.; a plot to bomb a Jewish nursing home; a plan to spread coronavirus to Jews — they have failed or been foiled by law enforcement.

The Jewish community also has a strong security apparatus in place, one which has seen an injection of funding over the past year. The Secure Community Network has increased its revenue from $1 million to $8 million since 2017, and added 25 employees. The Community Security Service, a group that trains Jewish volunteers to guard synagogues and Jewish institutions, said its annual budget for this year is double last year’s, at $1 million.

Jewish communities have “invested better than other communities in the security, because they already have the infrastructure,” said Ali Soufan, a former FBI counterterrorism agent and the head of the Soufan Group, an international security firm.

Soufan said that another critical step to protecting Jewish institutions — and efforts the Jewish groups should join in — is to force social media companies to stop hosting extremist groups, as well as dramatically increase the size of federal security grants for religious nonprofits. The Boogaloo movement has incubated on Facebook, where researchers recently found over two-dozen affiliated groups. The ADL is encouraging companies to stop buying ads on Facebook, and several major firms have joined the growing boycott movement, including Verizon, The North Face and Ben & Jerry’s.

Soufan and Rep. Max Rose of New York are also pushing the White House to label white nationalist organizations as foreign terrorist groups, since many of the most violent members have received training overseas. Despite the FBI and the State Department pushing for the same, the White House has yet to respond.

“Our tools are in place, we know what to do,” Rose said. “It’s just a question of whether we are going to treat all forms of terrorism as terrorism.”

Rose, who is Jewish, said that without a significant response from the government and tech companies, right-wing extremist groups are not going away.

“This movement right now looks very similar to what Al-Qaeda looked like in the early- to mid-nineties,” he said. “If that doesn’t scare somebody, I don’t know what does.”

Extremist activity is growing in the pandemic. How worried should Jews be?