Your guide to the disinformation plaguing the 2020 campaign 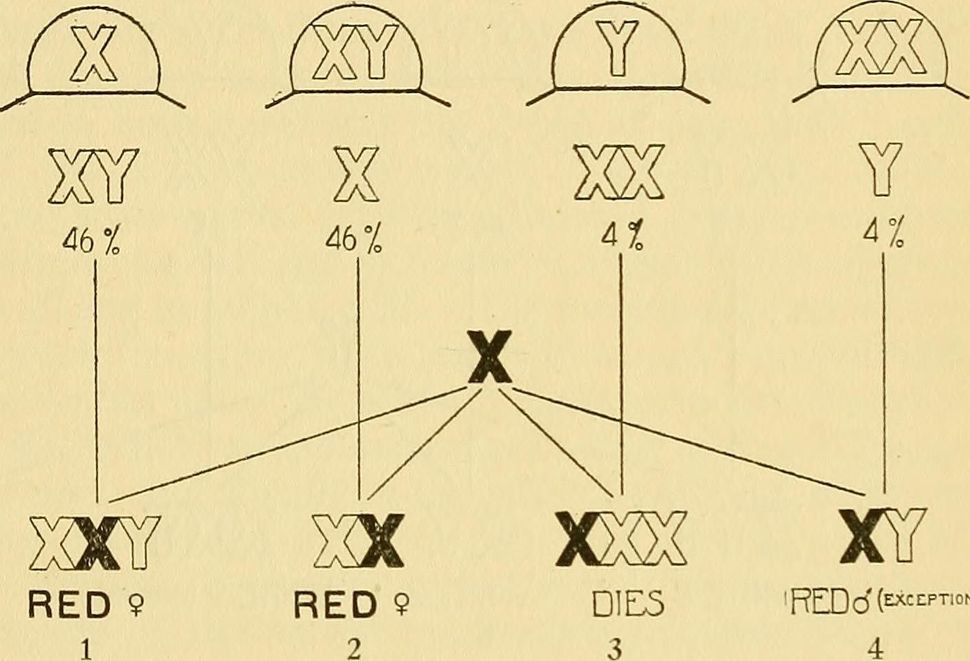 An image of the chromosomes of the vinegar fly from the 1919 book “The Physical Basis of Heredity.” Image by Thomas Hunt Morgan

A Wikipedia article about “genetic studies on Jews” was among the most shared links in antisemitic online spaces at the end of September, used to spread disinformation about Jews’ role in the slave trade, Islamophobic tropes and other conspiracy theories, according to ISD.

ISD researchers found that at the end of last month, users in hateful corners of Twitter, Facebook, Reddit and YouTube posted more than 660 times about Jews, and that some users shared the Wikipedia article and pointed to a section that suggests Jewish men and Arab men have shared paternal ancestors.

In one instance, a user reposted the article twice on Twitter on September 24 after first using it to argue that the role of Europeans in perpetuating the slave trade was overstated, since some Jews enslaved Black Americans and, according to the social media users, are not European due to their shared ancestry with Arabs.

A YouTube user posted a video on October 1 that quoted the article in discussing a theory adopted by the Black Hebrew Israelites that Jews are not really descended from the biblical Israelites.

Another post on September 23 did not include a link to the Wikipedia article but discussed its findings claimed that “bestiality” could explain the genealogical similarities between Arabs and Jews.

The posts, according to ISD extremism researcher Ciaran O’Connor, reflect a blend of different types of hatred, including both Islamophobia and antisemitism. Posts attempting to minimize white peoples’ role in the slave trade are also typically white supremacist.

Researchers also highlighted that “it’s the online users who drive the narrative around the article,” since in 2018, a viral Facebook post linked to the article as evidence for why there should be peace between Jewish Israelis and Muslim Palestinians.

The article’s most referenced section discusses studies from the early 1990s and early 2000s that found there was common paternal heritage between Sephardic and Ashkenazi Jews and between Israeli Jews and Palestinian Muslim Arabs.

Molly Boigon: Why do you think it’s so hard to set ground rules for social-media companies?

Jan Schakowsky: Early on, we wanted to encourage entrepreneurship and we wanted to encourage the development of the whole sector, and so social media companies were set free from liability in many ways. But now we are finding that consumers are feeling anxious about the Internet—whether or not they are in control of their own information, is this going to be a place where violence can be stoked, where extremism has a home.

We want in the legislation that we’ve just sent out as a discussion draft by staff to make sure that the social media platforms and the online marketplaces establish, maintain and make public written terms of service. It’s really a pretty modest idea that any failure to do that would result in what we would call in an unfair and deceptive practice.

Boigon: Is the issue in your mind that the written terms of service are not sufficiently strict, or that they’re not enforced?

Schakowsky: Certainly that they’re not enforced. Most social media companies, I think, have terms of service that, if they were enforced, would certainly improve the environment on the internet. I think that’s an interesting question on whether or not a final bill ought to have some minimum requirements, but right now, in the draft that we have sent out, we have really talked about establishing, maintaining and making public as opposed to evaluating those terms of service.

Boigon: Can you talk a little bit more about why hate speech is an issue of consumer protection?

Schakowsky: We want to empower these regulatory agencies—while in this case it’s the Federal Trade Commission, I’m also interested in the Consumer Product Safety Commission for example—to clarify their authority to act on these issues of extremism and product safety.

We know, and the FBI says, that QAnon actually is engaged in terrorism as a continuing terrorist threat, so this is real. This is not an abstract idea. It can cause real harm. Plus, we have found a situation where the platforms do not take account of products that are brought into this country or made in this country that are dangerous. We want to set some parameters here so that they can’t hide behind a liability shield.

Boigon: What would you say to people who think this type of legislation would be an infringement upon free speech?

Schakowsky: There can be fines. Facebook woke up a little bit from the $5 billion fine that they got [for violating consumer privacy]. Whatever the enforcement mechanisms are, they have to be meaningful to these companies that are so big and making so much money and focusing far less on consumer protection than on profit protection.

News outlets this week covered increasing disinformation about the legitimacy of mail-in voting. Trump’s Covid-19 diagnosis also generated false stories from both the left and the right. And Donald Trump Jr. may have known in advance about a video accusing Minnesota Rep. Ilhan Omar of voter fraud. ISD noted the spread of that video in its analysis of anti-Muslim content this week.

“We recognized the narrative that Donald Trump starting spreading earlier this year was going to play a significant role in the turnout and legitimacy of the 2020 election.” Read more.

“Fact-checkers have already knocked down the hoax that an airborne command center was readying for an invasion before the announcement. They also debunked another that claim that an episode of “The Simpsons” showed Trump in a coffin.” [Read more(http://click1.e.forward.com/omfsstrzznwdnnvsdklgvdmgptdklltlwgkntrqktwjkw_wgddgwjsz.html).

“A deceptive video released on Sunday… which claimed through unidentified sources and with no verifiable evidence that Rep. Ilhan Omar’s campaign had collected ballots illegally, was probably part of a coordinated disinformation effort, according to researchers at Stanford University and the University of Washington.” Read more.

The Forward’s coverage of disinformation and conspiracy theories

We wrote about the Proud Boys taking President Trump’s “stand by” comment at the debate as a “call to action,” a Proud Boys chapter in Israel and a report from the Anti-Defamation League that found that Jewish incumbents were bombarded with antisemitic tweets over the summer.

ISD has developed a tracker that scrapes the web for hateful posts across social media platforms. Researchers categorize hateful users based on their ideological motivations and use keywords to examine their conversations. All of the entities are manually reviewed by ISD analysts. To read more about ISD’s methodology, click here, and to see their entire analysis for the week, click here. 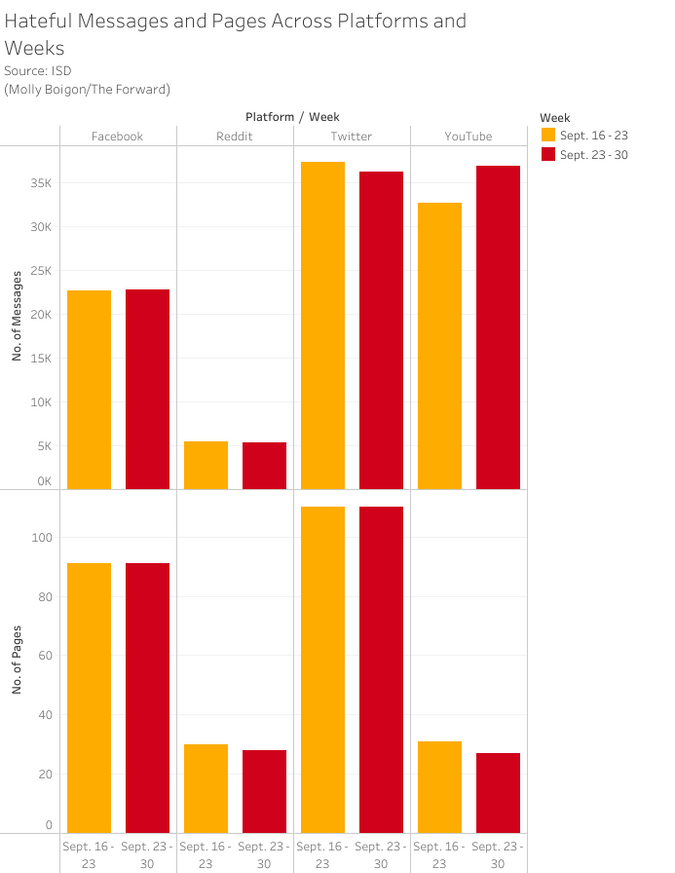 Explore how hateful messages and pages changed from last week to this week.

Your guide to the disinformation plaguing the 2020 campaign