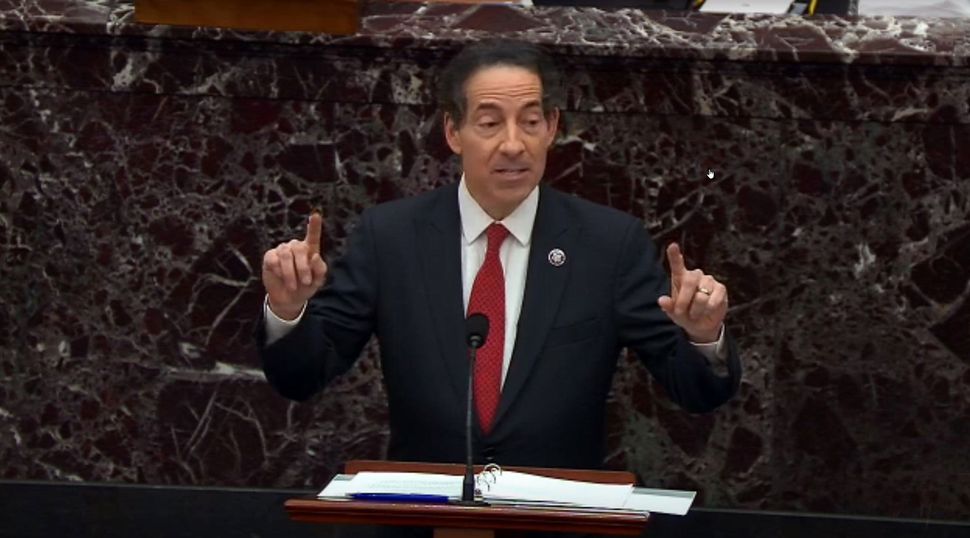 In a brief phone interview, Raskin, a Constitutional lawyer, was passionate and articulate about the legal and philosophical underpinnings of the case and the historic nature of the experience. But Raskin, who was first elected to the House in 2016, was less interested in talking about his own role, what he learned about himself, or his Jewish background.

Perhaps unsurprisingly, Raskin, 58, was also not eager to comment on the internet’s hottest new parlor game, “Bald or Jewish,” in which Twitter users discussed the way his bald spot resembles a kippah. “I understand there was a lot of stuff on social media,” was pretty much all he would say.

And Raskin also did not want to talk much about the suicide of his son, Tommy, about which he wrote a heartbreaking tribute that inspired thousands of people to do good deeds in Tommy’s name.

Asked how he gets himself together to focus on his work, Raskin said simply, “I don’t know the answer to your question.”

Here are excerpts from the conversation, edited for clarity and length.

How did you feel having this awesome responsibility?

I did feel a tremendous sense of history and responsibility when the Speaker asked me to do it. But the team of managers is one that I know and it’s a group of people that really knows how to work together. And so there was remarkable teamwork.

You know, I have played soccer, football and other sports, but I’ve never been on a team that has been so cohesive and focused on working together for a common goal. There was very little ego in the whole thing

The verdict was pretty much pre-determined. How did that change how you prosecuted the case?

I told the managers from the beginning that we were going for 100 votes. People kept saying, ‘Where are you going to get 17 Republican votes?’ And I’d say, ‘We’re not going for 67 votes. We are trying to tell a story, the facts of this case, that command the attention of 100 senators.’ And we think we presented overwhelming evidence that the president incited violent insurrection, and that evidence was unrefuted.

I still feel as if we should have gotten 100 votes. But, you know, I’m not naive about what partisanship is and how it would operate. Obviously it was all Republicans who were part of the 43 bloc who voted to acquit.

In some sense, it was much more about a corporate personality than it was about a political party. After all, we did get seven Republicans who broke ranks and voted to convict, and those were Republicans who were from New England, the Mid-Atlantic, the South, the Midwest, the West and Alaska. It was a very impressive group of people in the Republican caucus who voted to convict.

So it really wasn’t so much about loyalty to the Republican Party as it was about loyalty to Donald Trump and fear of Donald Trump. So perhaps we overstated how seriously people would take their oath of office to render an impartial justice. Perhaps we understated levels of cowardice among Trump’s sycophants.

What lessons have you learned about yourself and about the country?

The purpose of the trial was to allow us to get beyond these events by telling the truth about them and assigning the appropriate responsibility. But nations don’t move ahead by sweeping under the rug massive crimes against the people. That’s never worked with authoritarian or totalitarian societies that have committed genocide against people, and it’s not worked with despots and dictators who use violence to try to seize governmental power.

So, you know, we have to move forward in the spirit of Abraham Lincoln, who said that we need to defend the Union and the Constitution and denounce mob violence, racism and other threats to democracy.

The Department of Homeland Security has said that violent white supremacy is the No. 1 threat to the American people. It is the No. 1 terror threat to the American people. So I think bickering doesn’t quite capture what we’ve just lived through with the unleashing of a mob on Congress and against both Democratic and Republican officials who wouldn’t do the will of Donald Trump.

You know, in any free society, there are going to be partisan differences and there will be debating as part of the price and experience of freedom. The alternative to having a vibrant party system with people debating is having a one-party system under authoritarian rule, and nobody is really interested in that.

The question is whether politicians like Donald Trump can mobilize mob violence in order to have their way against the constitutional order, and we need to draw the line there. A political party is different from a religious cult. A political party should not operate as a cult of personality where everyone bows down to a worship leader. That is not just disgraceful from the standpoint of democratic self-respect, but it is a danger to the survival of our constitutional institutions.

How does it feel to have ignited the internet’s hottest new parlor game: Bald or Jewish?

I was not able to see any of the stuff that was said. I understand there was a lot of stuff on social media. We had no time for anything but to focus on the evidence.

The past two months have been unbearably tough for you with the loss of your son, Tommy, and being put into the spotlight during the impeachment trial. What helps you get through the day?

[Long pause]. I have been holding my son very close in my heart and so I could not have done any of it without his spirit and his memories.

How do you get yourself together to focus on your work?

I don’t know the answer to your question.