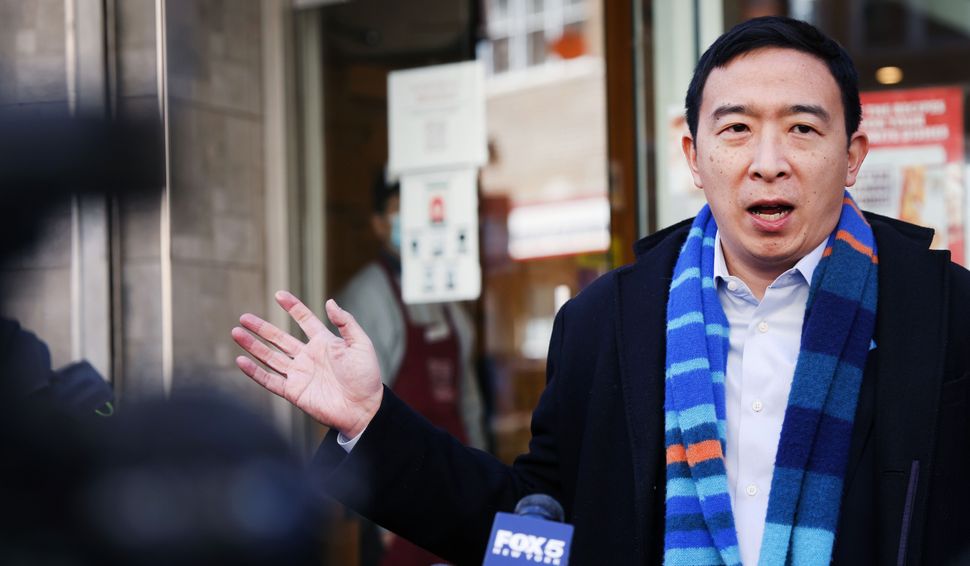 Andrew Yang has been courting the Jewish vote in his bid for mayor of New York City. Photo by Spencer Platt/Getty Images

Andrew Yang, one of the leading candidates for mayor of New York City, is expected to get a boost in his effort to lock in the Jewish voting blocs with the endorsement of one of the youngest and most influential Jewish politicians in New York.

Assemblyman Daniel Rosenthal told the Forward that he will endorse Yang for mayor alongside Jewish community leaders at an event in the Kew Garden Hills neighborhood of Queens on Tuesday.

“New York City is facing unprecedented challenges. The politics of old is not going to move the city forward to a bright future,” Rosenthal said in an interview on Monday. “Yang is a breath of fresh air that the city importantly needs. He’s offering something unique.”

Rosenthal, a 29-year-old Democrat who was first elected in 2017, represents the majority of the Central Queens Jewish community in the 27th Assembly District. Last month, he was able to mobilize the mostly modern-Orthodox community in Kew Garden Hills in support of James Gennaro, a former three-term councilman against Moumita Ahmed, a candidate who was a member of the Democratic Socialists of America and supported by Bernie Sanders in the special election for the 24th Council District.

Gennaro, who won about 60 percent of the voters’ first-choice in the new rank-choice voting system, received almost unanimous Jewish support and turnout was unprecedented in Rosenthal’s part of the district compared to other neighborhoods.

In recent weeks, Yang invested time courting the city’s Orthodox Jews, which historically have been an influential voting bloc in local elections. He met with leaders of the Orthodox community in Borough Park, attended a town hall meeting hosted by Agudath Israel of America, defended the yeshiva education system and has taken a bold stance labeling the Boycott, Divestment and Sanctions movement as antisemitic.

Rosenthal told the Forward he was very impressed with Yang’s level of outreach. He added that he also decided to endorse Yang in the crowded race for mayor to make a statement about the candidate’s support for Israel. “Certain groups have turned Israel into political football, and Yang took an early and courageous decision that he would not tolerate the BDS movement,” Rosenthal said.

Yang said in a statement to the Forward that he is “deeply proud to have the support of Assemblymember Rosenthal, a true leader in the Jewish community” and is looking forward to working with him “to address important issues facing New York’s Jewish community and accelerate our COVID comeback together.”

Yang said that if elected mayor he will be “committed to making sure all members of New York’s Jewish community feel welcome and safe in our city, and will respect their right to religious freedom.”