How the heck did a ham get a kosher certification? This man knows. 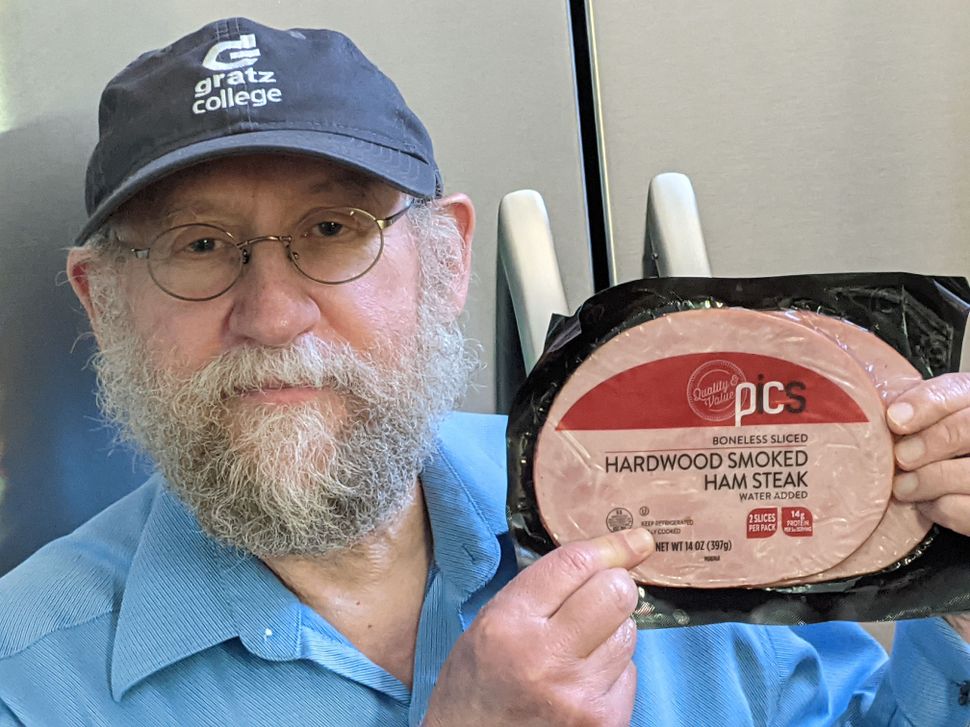 Paul Finkelman was shopping for groceries at Price Chopper supermarket in Albany, NY, when his son asked him to come over to the deli aisle. Finkelman’s son, who had been looking for turkey, found packages of Price Chopper’s store-brand PICS sliced ham stamped with the Orthodox Union’s (OU) kosher certification.

Finkelman was surprised that the relatively small, Jewish-owned supermarket chain, which sells a variety of kosher products would purport to sell “kosher” ham.

Amused, Finkelman snapped a picture of one of the packages. He sent the photos to a couple of friends and headed home. “I thought it was pretty funny,” Finkelman said. “I got responses like ‘What?????’” Later that day, he returned to the supermarket to get a better picture.

A professor of legal history and the President of Gratz College who studies the relationship between law and religion, Finkelman was fascinated by the larger implications of the certification beyond its humor.

On Sunday, June 6, Finkelman sent the picture of the ham to two academic email lists, one focused on religion and law and the other for constitutional law. “Most people who care would not be fooled by the OU on the package of ham. But I presume someone who does not speak or read English well might just know to look for the symbol to buy food thinking it is kosher,” Finkelman wrote. “Or, someone might think that ‘kosher ham’ is really just a turkey product.”

Finkelman discussed the issue with Jewish and non-Jewish law professors, as well as rabbis, all of whom were interested in kosher laws as a teaching tool for other kinds of law, he said.

Meanwhile, Finkelman’s kosher ham photo began to go viral, as it circulated throughout the Jewish corners of Twitter and Facebook. A tweet from law professor David Bernstein received 377 likes and 95 retweets.

Later that day, Finkelman received a phone call from Howard Katzenstein, the Director of Business Management and Trademark Compliance at the OU. “For a minute, I thought it must have been a joke. I thought it was a law professor pretending to be from OU.org, because why would OU.org be calling me?” Finkelman said.

When Katzenstein assured him that the call was real, Finkelman began the first in a series of long conversations with the kosher certification organization. The OU confirmed that the ham was wrongfully marked and began investigating the possible reasons behind its mislabeling, Finkelman said.

“As a professor, I think about hypotheticals,” Finkelman said. “Ninety-nine percent of people who keep kosher would not buy kosher ham, but it’s not impossible that somebody might be misled. Someone might have just seen the OU and bought it.”

“Having done trademark compliance for 25 years, there’s very little that shocks me. It’s just a growing aggravation,” Katzenstein said. “Even though it was a Sunday, I had to drop everything and deal with it.”

As the afternoon went on, Finkelman fielded calls from OU’s general counsel and sent pictures of the package to the organization. Later, he returned to the Price Chopper, where he bought a package of the ham to send the receipt to the OU, who wanted to contact the management of the supermarket chain.

“The danger is that kosher certification probably needs to be rethought in the age of online sales and the internet,” Finkelman said. “With private label packaging, if Price Chopper had put an OU label on the turkey that wasn’t kosher, people would have eaten it.”

Finkelman and the representatives of the OU talked to the head of the Golub Corporation, the company that runs Price Chopper. “It’s a closely held company, and they were very receptive,” Finkelman said.

Golub told Finkelman and the OU that the unauthorized certification on the packages of ham had been a mistake, Finkelman said.

By Monday afternoon, Price Chopper pulled the “kosher” ham from their shelves. Finkelman and his son couldn’t find the ham at the other two store locations they drove to that day, he said.

On Tuesday, the OU tweeted that they had not certified the ham and that the product was being withdrawn from Price Chopper’s shelves. Price Chopper tweeted a similar clarification.

“The OU.org did a superb job of fixing this,” Finkelman said. “It was clearly human error. There was no attempted fraud, but the question is how do we learn from human error?”

Finkelman was completely unaware of his mild internet fame until his son, who loves to cook and follows a number of kosher Facebook pages, told him he had seen the picture online.

“I started laughing. I like to see the humor in life, and I thought it was just so crazy!” Finkelman said. “Nobody knew it was my picture.”

How the heck did a ham get a kosher certification? This man knows.