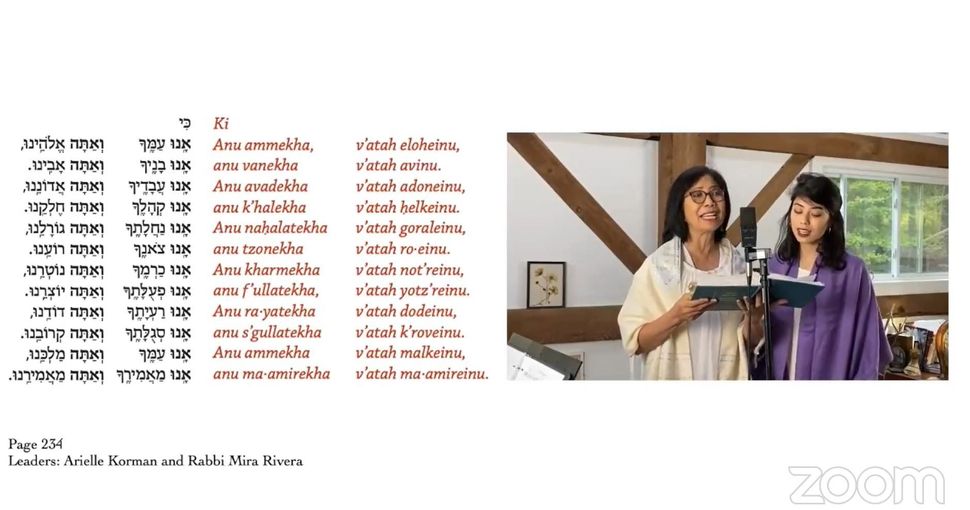 A year ago, as the pandemic raged with no end in sight and many Jews of color continued to report acts of exclusion in mainstream congregations, leaders of one multicultural Jewish group seized on an idea:

Why not hold our own services online?

That became the Jews of Color, Sephardi, Mizrahi, Latinx-led High Holy Days Services Online, or JOCHHD, held on Facebook and other platforms. The interdenominational services, which are free, return this year, beginning today. Registration is required.

Jared Jackson, the founder and director of Jews in ALL Hues, said the impetus arose in 2019 when his organization was looking to expand programming beyond “just the usual ‘let’s get together and talk about racism as Jews of color.’

“Then the pandemic hit,” he said, “and we decided that in a time when so many people were isolated spiritually, mentally, and physically, what better way to bring them together and connect than through this kind of gathering?”

The resulting services drew 600 attendees, not limited to people of color or even to Jews, with participants hailing from around the world. Since then, about 10,000 people have viewed the recorded program, say the service’s planners.

“I was crying because it was so beautiful,” Jackson said. “There were so many people who chimed in on the Zoom, in the chat, and in the comments on Facebook and even emails saying that they had taken a hiatus from engaging with the Jewish community because they encountered so much racism, and that this was the easiest entry back into Jewish spiritual life for them.”

It was also intended as a space, said Rebekah Robinson, Jews in ALL Hues’ cantorial leader, where “people could bring their whole selves and not get inappropriate questions, not have to worry about security scrutinizing them, or somebody calling security on them.”

Robinson also described it as a platform for emerging artists, clergy, singers and writers who “identify as Jews of color or as Sephardi, Mizrahi, Latinx, to showcase the talents, the wisdom, the voices that come out of our community and our network.”

That includes those who may not fully identify as people of color, among them some Sephardic and Mizrahi Jews. One of those is Ladino author and singer-songwriter Sarah Aroeste, who said while she is Sephardic, she doesn’t consider herself specifically a Jew of color.

“But I know that I’m not Ashkenazi,” she stated. “I really appreciate that this program has made clear that it’s really all inclusive. I think that’s a beautiful framework for coming together to worship and be in community.”

Second day Rosh Hashanah, described as “grounding and lifting of gratitudes, with prayer and story woven in embodied, connective, and liberatory ways,” will be led by Hollie and Fife, along with Rising Kohenet Harriette Wimms, Autumn Leonard and Yoshi Silverstein.

So does participation in the JOCHHD services pose a conflict for Jews who also celebrate with their regular congregations?

No, said Jackson. “We are not here to lay claim to anyone,” he said, noting that many presenters have responsibilities with their own congregations and have pre-recorded their JOCHHD presentations.

One of those is Wimms, a psychologist and founder of the Jews of Color Mishpacha Project.

“I will be leading services with my home community on the first day of Rosh Hashanah. I’ll be doing services with this JOCHHD event on the second day,” she said. “There are so many beautiful communities that I’m a part of and I’m only one person. But I don’t see it as conflict; it’s beautiful to have abundance. I just feel really blessed to have all of these beautiful options.”

Wimms said those options are a necessity, not a luxury, citing a recent Jews of Color Initiative survey that found 80 percent of Jews of color reporting experiencing some form of discrimination in a Jewish space. The Initiative was the sponsor of the 2020 JOCHHD services, which this year are underwritten by Rise Up and co-sponsored by numerous organizations focusing on Jewish diversity.

All of this is made possible thanks to 21st century technology, said JMN board member Eric Greene. Last year, he went back and forth between the JOCHHD services, those of his own congregation, and also a third shul where he was speaking and leading a workshop.

“While normally I wouldn’t be on a bus going across town in the middle of Rosh Hashanah or Yom Kippur, from a Zoom screen I was able to connect with these multiple communities during the High Holy Days.

“What’s exciting about this is that there are more and more Jews of color across the country who are fully embracing their identities as people of color and fully embracing their identities as Jews, and finding their voices as leaders within the Jewish community,” he said. “They’re saying without apology that as Jews of color we have something that is important and distinct and beautiful to contribute to the Jewish community.”