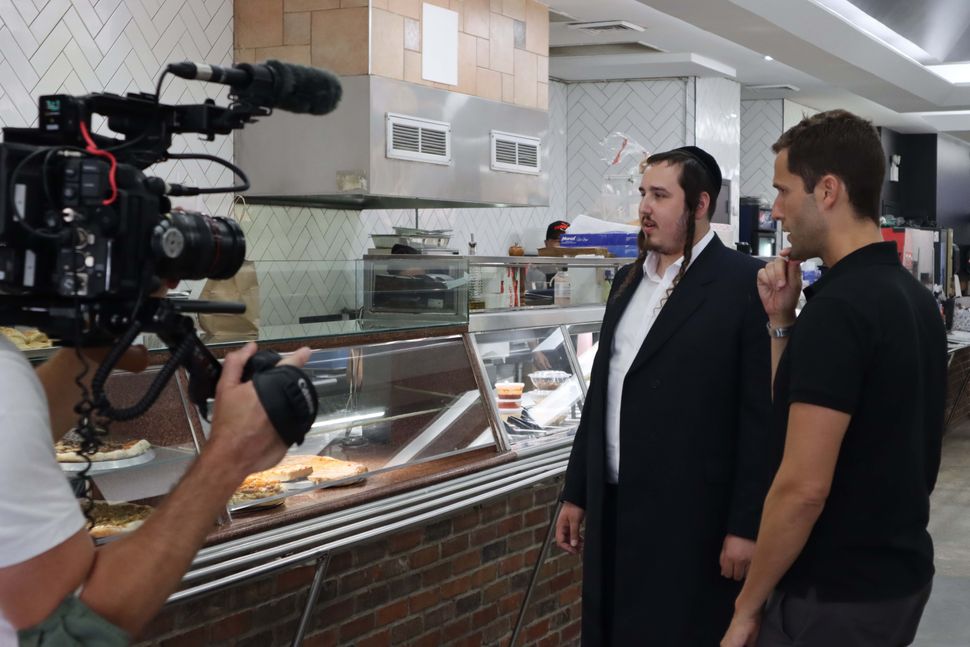 Shloime Zionce, with his black yarmulke and long peyot, would not draw a second glance on the streets of Brooklyn or Jerusalem. In Beirut, Bogota or Kabul, it’s a different story.

But that’s exactly where he’s been going, sharing his journey with his tens of thousands of YouTube followers along the way, attempting to show them that the world isn’t nearly as scary as he had once believed it to be.

“What I want people to do is to open their eyes to the people around them,” Zionce said in an interview.

“If people really just look at the world without a lens, take off your biases for a couple of minutes, and try to see the humanity in everyone, we’ll realize that the world is a much better place.”

On his channel, which he started in 2019 and has nearly 40,000 subscribers, he shares content ranging from his searches for kosher food in Iraq and Afghanistan to meetings he had with ISIS prisoners in a Kurdish refugee camp, what Saudi Arabia looked like when it first opened to foreign tourists in 2019, and a walk through Medellin’s Comuna 13, once a center of the Colombian drug trade and one of the country’s most dangerous neighborhoods.

After travelling to 43 countries, he’s found that “most people in the world very much just want to live happy lives, spend time with their families, pay their bills, watch nice sunsets and eat good food,” he told the Forward. “We all have the same wants.”

That wasn’t always his perspective.

Growing up a Hasidic Jew in post 9/11 North America, Zionce said he absorbed many negative stereotypes about the Middle East. 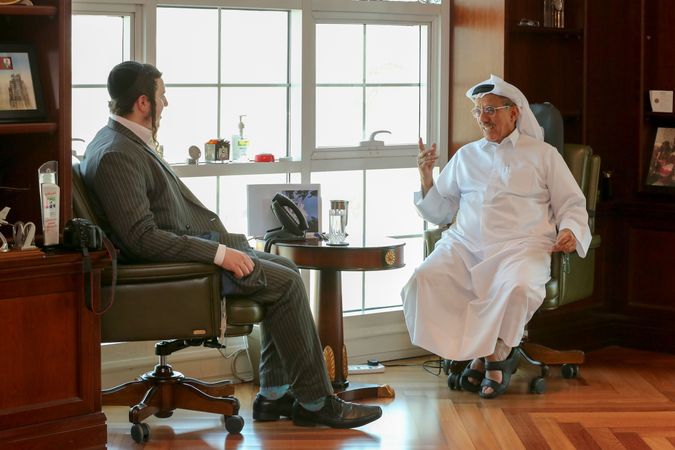 “As [a] Western person, when you think of Iraq or Saudi Arabia, you probably think of not such great things,” he said. After Sept. 11, “one of the things I mistakenly took away from that was Arab people and Muslim people are no good. I walked around with that sentiment for many years, I’m not proud of it.”

He grew up the first of four children in a Hasidic family in urban Toronto. But as a teenager, he found that the standard Hasidic life path wasn’t for him.

“Throughout my teenage years, I was not a very studious person,” he recalled. At 17, he had dropped out of yeshiva and was doing odd jobs, something which was known in his community as being “out on the street” as full time Yeshiva study was the norm.

Ultimately he returned to the Hasidic community, but not until after he got the travel bug. His first time leaving North America was in 2011, to attend the Rosh Hashanah pilgrimage to the grave of Rebbe Nachman of Breslav in Uman, Ukraine.

“It was like a lightning rod hit me. Something inside me really lit up on that trip and I realized that I knew so little about the world.”

At the time, he said, he set a goal to visit 50 countries in his lifetime. Ten years later, he’s now realized it was far too conservative a goal. 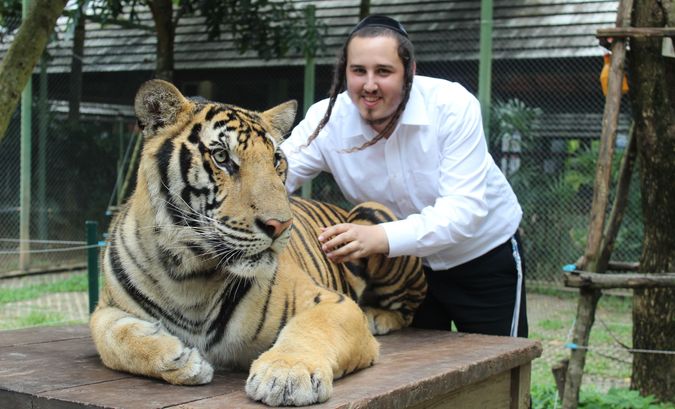 Zionce’s first introduction to the Arab world came a few years later, when he had returned to yeshiva study in Israel at the prompting of his father.

During one of the seasonal breaks, he traveled to Egypt, and many of his preconceptions of the Arab world came crashing down.

“That was the first time I really met Arab people and they we’re so nice and so friendly, it really changed my life,” Zionce said. He spent hours talking with a pair of shopkeepers at the Taba border crossing just over the border from Eilat, and says he is still in touch with them.

He’s encountered that sense of humanity’s universal nature everywhere he goes — even when interviewing ISIS prisoners held by Kurdish Security forces in an Iraqi Refugee camp. The prisoners, Zionce recalled, were barely 20 years old when he met them in 2020, meaning that they would have been only in their early teens when they joined the extremist group.

“When they were part of ISIS they were children, they were 13 or 14 years old, And I’m not going to judge them as to why or how they joined,” he said.

“One thing I’ve been led to understand is that they may have been forced as children to join this terror organization against their will.”

Zionce ended up sitting with them for about an hour. “It was really eye opening to have a conversation with people who, in every sense of the world, at any other time we would consider the enemy, but prior to that seemed like normal people, I hope that they’re on a path to repentance,” he said.

During a 2020 trip to the United Arab Emirates, Zionce got lost in the desert while trying to find Al Madam, an abandoned city being swallowed up by the sands. Ultimately, he was picked up by a group of Emirati men. He spent the rest of the day with them, and they became fast friends.

“We drank tea and played board games, and it was one of the most amazing experiences I ever had in my life, just connecting with all of these perfect strangers who were so inviting to me,” Zionce said.

The video he made about the experience ended up being tweeted out by the brother of Emirati leader Mohammed Bin Zayed.

He didn’t begin his channel until years later. Zionce wed in 2015, and two years later, he began working as a journalist for Ami Magazine, an Orthodox weekly based in Brooklyn. Reporting from Israel, Zionce covered many topics. But after Zionce wrote a story about a vacation to Thailand he took with his wife, his editor decided to place him on the travel beat.

“People loved that, they started writing letters to the magazine, asking for the magazine to send me on trips. And the next thing you know, I was suddenly all around the world,” Zionce said.

“So what started as a hobby really turned into my profession. They’ve sent me to Mexico, to Lebanon, to Saudi Arabia, Iraq and many other places.”

Four years later, Zionce is Ami’s senior foreign affairs correspondent. While the magazine has been supportive, and it’s through their assignments he gets to do much of his travel, his YouTube channel is something separate, he said, as he didn’t want his voice limited to Ami’s largely Orthodox audience.

From YouTube’s audience metrics, he can tell that his viewership strongly dips on Saturdays, which leads him to believe that much of his audience are Sabbath-keeping Orthodox Jews. But he can also see that many of his views come from places like the UAE, Saudi Arabia, Pakistan and elsewhere in the Muslim World.

He’s also tried not just to show his Hasidic community the wider world, but also present his Hasidic world to those outside of it.

In late 2020, he brought another YouTube travel vlogger, Peter Santanello, to New York’s Hasidic communities for a 15 episode series. The first episode alone has garnered more than six million views.

“That communication is very important. When we all get to know each other and see each other for the human beings we are, the world will be a much better place.”

While YouTube comment sections have a reputation for nastiness, with few exceptions, that’s not been Zionce’s experience. Regardless of their background, he’s found viewers to be overwhelmingly positive about his mission.

“I am an atheist and watching this fills my heart with joy. It’s beautiful to see humans being kind to each other,” wrote one viewer.

“I’m a Christian but watching this makes me so happy,” wrote another.

“I am Muslim myself and loved every part of this series!,” another viewer commented on one of the videos about the New York Hasidic Community. “So interesting to understand more about the community and your culture.”