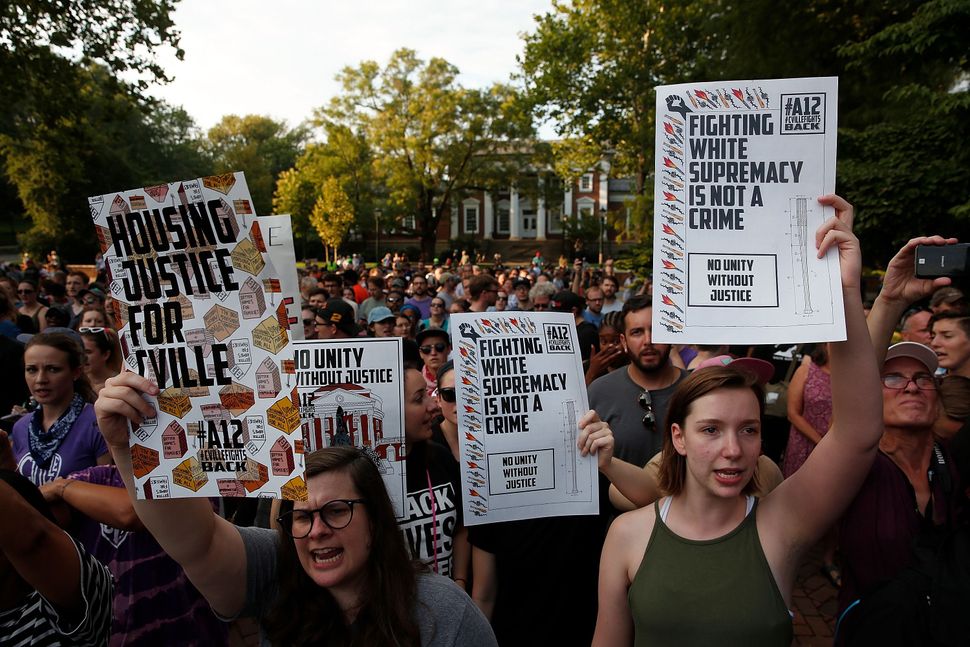 CHARLOTTESVILLE, VA – AUGUST 11: Protesters gather at an event on the campus of the University of Virginia organized by the group Students Act Against White Supremacy marking the one year anniversary of a deadly clash between white supremacists and counter protesters August 11, 2018 in Charlottesville, Virginia. Charlottesville has been declared in a state of emergency by Virginia Gov. Ralph Northam as the city braces for the one year anniversary of the deadly clash between white supremacist forces and counter protesters over the potential removal of Confederate statues of Robert E. Lee and Stonewall Jackson. A ÒUnite the RightÓ rally featuring some of the same groups is planned for tomorrow in Washington, DC. (Photo by Win McNamee/Getty Images) Photo by Getty Images

Alan Levine was schmoozing with friends at the Conservative Synagogue of the Hamptons in the summer of 2017, two weeks after the deadly Unite the Right rally in Charlottesville, when he first heard of a plan to sue the far-right organizers.

Robbie Kaplan, the celebrity litigator and a longtime friend, announced that she wanted to take the antisemites behind the deadly event to court. And she thought Levine would be an excellent addition to the team.

“I asked him if he wanted to join us and depose some Nazis,” Kaplan recalled. 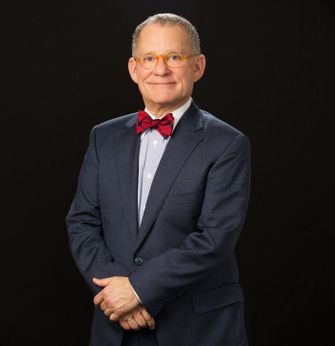 “Cross-examining Nazis isn’t any more difficult,” he said, “it’s just the particular flavor — that they’re antisemitic — that gets my personal interest.”

Levine recounted the story from a side room in Charlottesville’s federal courthouse Thursday, where the veteran trial lawyer, who also happens to be the chair of the flagship seminary of the Conservative movement, has been pursuing a case against 24 of the rally organizers and sponsors for the last four weeks.

The trial has drawn national attention since it started a month ago. Lawyers made their closing arguments Thursday in the case, which charges defendants with conspiracy and aims to bankrupt them. A verdict is expected before Thanksgiving.

Throughout it all, Levine has been praying via Zoom with a minyan from Manhattan’s Park Avenue Synagogue, where he once served as chair of the congregation’s board.

He also decided to leave his trademark bow ties back in New York.

“I decided that I wouldn’t wear a bow tie here in Virginia but I love my bow tie,” he said. “I don’t know what the caricature in Virginia jurors’ minds are about a lawyer from New York and I want them to hear my words and not get distracted by any preconceptions — physical preconceptions — and so I have worn pretty basic clothing in a courtroom.”

The trial has been full of remarkable scenes, as Levine, Kaplan and other heavy hitters on the plaintiff’s side of the courtroom face off against a disorganized defense team that includes Christopher Cantwell, known online as the “crying Nazi,” and white nationalist Richard Spencer, both of whom are representing themselves.

Levine, who is working with attorneys from three law firms coordinated by the nonprofit Integrity First for America, has elicited some dramatic testimony from witnesses — both friendly and hostile.

He questioned a Jewish witness to the rally who recounted hiding her ring inscribed with the Sh’ma prayer as she saw neo-Nazi protesters marching just feet from her front door.

He asked League of the South president Michael Hill, a defendant in the case: “You not only consider yourself an antisemite, but for you the Jewish person and the Jewish people are your enemies. Is that right?”

“I see a lot of animosity on the part of the Jewish people,” Hill replied before the judge instructed him to directly answer the question. “Yes,” he said. Hill also acknowledged burning an Israeli flag, a copy of the Talmud and the Communist Manifesto because of his animosity for its Jewish author, Karl Marx.

Hill appeared on a podcast during the trial and told the host that he was proud “to have got the opportunity to face off with this New York Jew attorney.”

“I also pray,” Hill added, “against our enemies, particularly these attorneys, that you will darken and confuse their counsel, break their teeth, and let them fall into the ditch they’re digging for us.”

In addition to enduring the personal attacks, Levine and the rest of the legal team — representing 12 plaintiffs who say they suffered physical and psychological damage as a result of Unite the Right — have spent years poring over thousands of internet chat log pages filled with racist screeds, slurs and disturbing images.

On the witness stand and in deposition videos, many of the defendants have made light of the Holocaust and advocated for white supremacy.

Tom Gutherz, rabbi of Congregation Beth Israel in Charlottesville, said he admired Levine’s willingness to immerse himself in the unsavory elements of the case.

Levine grew up in Middletown, New York, and was raised in Conservative Judaism, with a synagogue president grandfather and a mother who founded the local Jewish federation. He joined Park Avenue Synagogue during law school at New York University and served as board chair of the congregation in the 1990s.

Rabbi Elliot Cosgrove, who leads Park Avenue, has prayed with Levine throughout the trial during the synagogue’s Zoom minyans. Cosgrove called him a trusted confidant who remained approachable despite an accomplished career.

“It’s very rare that you have someone who can walk with kings but never loses the common touch,” Cosgrove said. “Being a fierce advocate and a consummate mensch — that’s the double helix of Alan’s DNA.”

The morning minyan that Levine attends several times per week are one of the few breaks he’s had during the trial. Levine said his firm, Cooley, had put more than $10 million of pro bono work into the case, and that in Charlottesville he has been fully immersed in the case.

He usually starts the morning with oatmeal or eggs and tries his best to avoid junk food throughout the day.

“There’s no such thing as a relaxed meal when you’re on trial,” Levine said. “It’s generally the time when I get to lose weight because I’m not eating.” 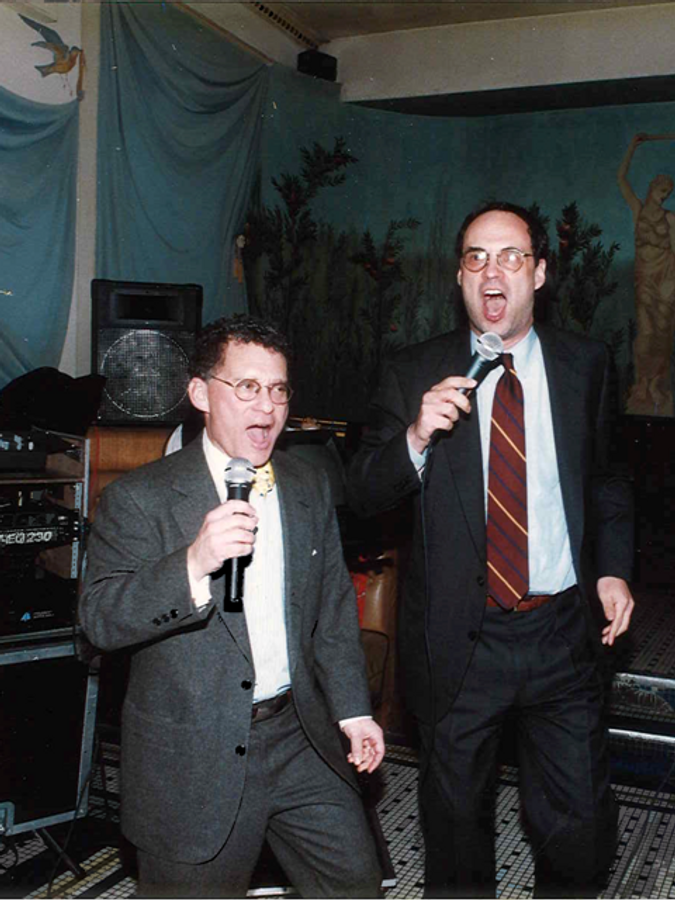 Alan Levine, left, during a recruitment event for the law firm Cooley in the 1990s. Courtesy of Cooley

Levine became chair of the board of the Jewish Theological Seminary (JTS), which includes the Conservative rabbinical college, in 2015 and cited a recently completed $75 million fundraising campaign for a new campus as a top accomplishment. He said drawing Jews from outside the Conservative movement to the school, better integrating JTS with its multicultural neighborhood on the northern stretch of the Upper West Side and recruiting younger faculty were among his other priorities.

(Levine also said he did not see the need for the kind of reckoning over past sexual misconduct that Hebrew Union College-Jewish Institute of Religion, the Reform seminary, is currently going through. “I don’t think that’s necessary,” Levine said. “We’re comfortable that people are treated properly at JTS and that it’s a healthy community.”)

Levine said his only break from Charlottesville since he arrived on Oct. 20 was for a JTS board meeting in New York City.

He said that his Jewish values have manifested in his legal work beyond suing neo-Nazis. Levine has also worked on expanding access to legal aid in New York, and lobbied to make New York the first state to require would-be attorneys to complete 50 hours of pro bono work to be admitted to the state bar.

“As active as I have been in the Jewish world over my lifetime I’ve continually been involved in my legal career in doing things in the legal community that help people that are less fortunate,” Levine said. “I think I live my Jewish principles.”

Correction: The original version of this article and its headline incorrectly referred to Alan Levine as president of the Jewish Theological Seminary. He is chair of the board of directors.