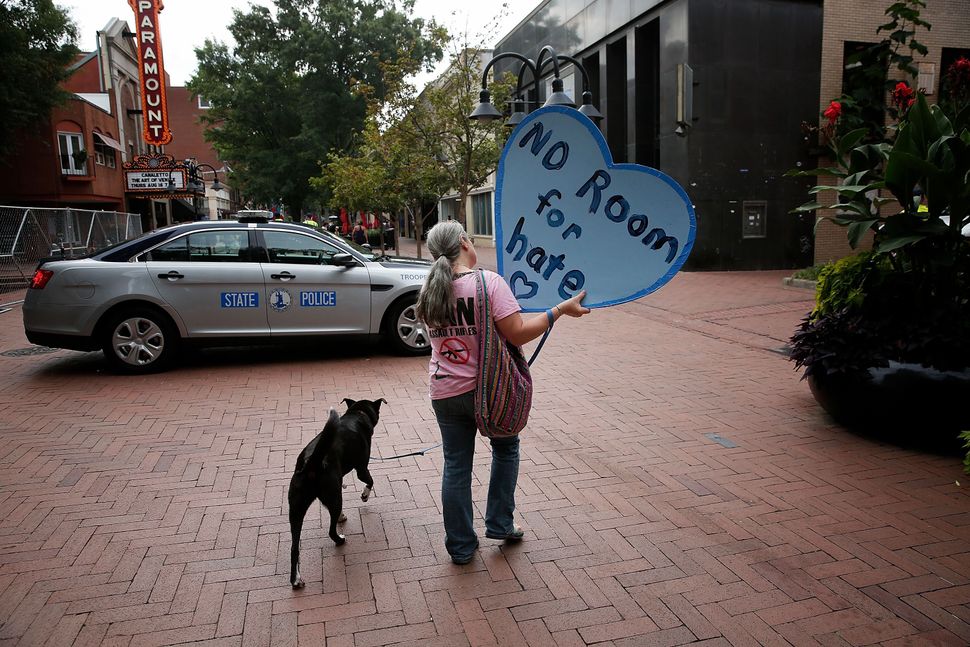 Mary Grace, from Durham, North Carolina, walks through the downtown mall area August 11, 2018 in Charlottesville, Virginia. Charlottesville has been declared in a state of emergency by Virginia Gov. Ralph Northam as the city braces for the one year anniversary of the deadly clash between white supremacist forces and counter protesters over the potential removal of Confederate statues of Robert E. Lee and Jackson. A “Unite the Right” rally featuring some of the same groups is planned for tomorrow in Washington, DC. Photo by Getty Images

The jury deadlocked on whether defendants in the Charlottesville trial had committed “racially motivated violence” under federal law. But the attorneys in this landmark civil case against neo-Nazis won a verdict Tuesday that allowed them to declare victory.

Jurors found 24 far-right individuals and organizations had broken Virginia civil conspiracy laws, and had assaulted and inflicted emotional distress. They also awarded plaintiffs $25.3 million in damages in the case, brought in large part to financially hobble the defendants.

“This case has sent a clear message: violent hate won’t go unanswered,” said Amy Spitalnick, director of Integrity First for America, a nonprofit that organized the case, in a statement. “There will be accountability.”

The defendants did not face the prospect of jail time in the case — criminal cases stemming from the rally have already been adjudicated — but instead can now be held liable for millions of dollars in physical and emotional damages suffered as the result of the rally. Rallygoers spread mayhem and several counterprotesters were hit — and one killed — in a car attack by one of the defendants, James Fields. Others were allegedly beaten by far-right attendees. The 12 plaintiffs included several who were hit during the car attack.

“What would it take to make sure that defendants and their co-conspirators never ever do anything like this ever again?” Roberta Kaplan, an attorney for the plaintiffs, asked jurors during closing arguments.

Much of the case focused on the racist and antisemitic views of defendants like Richard Spencer, the white nationalist who rose to prominence during the Trump administration, and Christopher Cantwell, a podcast host currently in prison for extortion who is known online as the “crying Nazi.”

The trial also had its share of striking moments as Jewish attorneys for the plaintiffs — including Kaplan and Alan Levine — have questioned antisemitic leaders who were clearly more comfortable inveighing against Jews online than answering their questions in court.

Alan Levine, a prominent trial lawyer and chair of the Jewish Theological Seminary, aggressively questioned League of the South president Michael Hill, a defendant in the case. He used Hill’s past writing to pin down his beliefs on Jews and Black people that Hill had tried to soften on the stand.

There were other embarrassing moments for the defendants, including when an attorney for the plaintiffs played a clip of Matthew Heimbach, leader of the fascist Traditionalist Workers Party, saying on a podcast that his lawyer had instructed him to delete incriminating social media accounts; Heimbach had told the court that two of his ex-wives had deleted the accounts after arguments about taking out the trash.

But several of the defendants — and at least one of their attorneys — also used the courtroom as a stage to promote their hateful worldviews to those following the trial on social media or listening to the audio feed.

Oren Segal, who runs the Anti-Defamation League’s Center on Extremism, told The Washington Post early in the trial that defendants were tailoring their actions in court to match what the most radical corners of the internet wanted to see — for example, Cantwell asked Heimbach what his favorite Holocaust joke was.

“All of them understand that in some ways, the performance that they put on over the next month is going to sort of set themselves up for whether or not they still have whatever following they will have,” Segal said.

Jason Kessler, a lead organizer of Unite the Right, was hosting online chats about the case in real-time, until the judge reportedly told him he could not comment on witness testimony as it was taking place.

The case also brought to Charlottesville one of the world’s leading historians of the Holocaust. Jurors heard from Deborah Lipstadt about how the so-called replacement theory that animated many of those who organized the Charlottesville rally is tied to antisemitism. And a Jewish witness who was a University of Virginia student in 2017 recounted fleeing from her dorm room as neo-Nazis marched just yards away from her door.

Molly Conger, a local freelance journalist and activist, said on Twitter Tuesday that regardless of the verdict the case had already kneecapped much of the country’s far-right infrastructure.

“Win lose or draw, this case has already had serious impacts on the ability of the defendants to continue to engage in organized white supremacist activity,” Conger said. “They’re broke, scattered, and fighting amongst themselves.”

The case has also renewed difficult memories of the August 2017 rally for members of the local Jewish community, many of whom have been reluctant to speak to the media for fear of drawing the ire of white supremacists following the case.

Rabbi Tom Gutherz, who leads the city’s main synagogue, said during the trial that while he hoped the organizers would be held accountable the trial’s conclusion would not provide a neat resolution for locals.

“There’s not going to be closure,” Gutherz said.