Bloomberg: Partisanship blinds too many Jews to antisemitism within their own parties 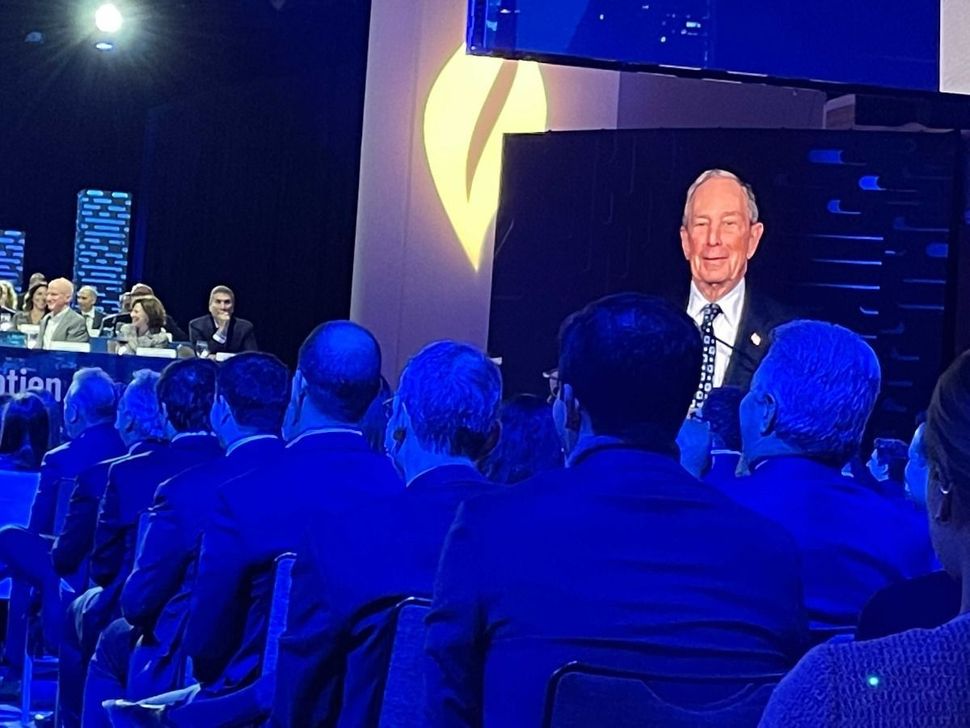 At a fundraising dinner Monday, Michael Bloomberg criticized Jewish Americans for too often failing to call out antisemitism when it comes from political allies.

“Partisanship can be blinding,” the former New York City mayor said in a speech at the UJA-Federation of New York’s annual Wall Street Dinner in Manhattan. “It blinds us to shameful wrongs in our own party that we would be outraged by if the other party committed them.”

The consequence is a Jewish community that is “not truly defending” itself at a time when “across the country, we have seen Jews harassed, beaten, and killed for their faith,” Bloomberg continued, imploring Jewish Americans to root out antisemitism no matter where it originates.

He singled out Reps. Marjorie Taylor Greene, a controversial Republican from Georgia, and Rashida Tlaib, a Democratic progressive from Michigan; both have been accused of making antisemitic comments and aligning with antisemites. He said they should be treated in “the same way we treat those who traffic in any form of bigotry: as extremists who are a danger to our country, who are unfit for public office, and who should be relegated to the fringes as political pariahs.”

Greene has made a number of antisemitic statements since running for office, and most recently has equated COVID-19 safety measures with the treatment of Jews under the Nazis. Tlaib has invoked antisemitic tropes and called Israel an “apartheid” state, which Democratic members of Congress have criticized as antisemitic.

“It would be funny, if it were not so dangerous,” Bloomberg said of Greene’s 2018 Facebook post in which she claimed that a Jewish-funded space laser had started a California wildfire.

Bloomberg was a Democrat until he ran for New York mayor in 2001 as a Republican. He won three consecutive terms and governed as a social liberal and fiscal moderate. He then ran for president unsuccessfully in the 2020 Democratic primary. To an audience of about 700 Monday, he invoked the destruction of the Second Temple to describe political differences within the Jewish community.

“Today is the last day of Hanukkah – a holiday that marks a miracle,” he said. “But it began with a civil conflict among Jews, torn apart by the pressure of living under Greek rule.”

He asked American Jews to quit engaging in what he called “a perverse form of what-about-ism” in which they say “in effect, ‘the antisemites in your party are far worse than the ones in mine.’”

He said he was alarmed by American Jews who seem to care most whether news is good for Republicans or Democrats. For such people, “partisan affiliation has become a religion – and their new tribe is their political identity.”

Bloomberg also criticized the far left and activists on college campuses who are using the Israeli-Palestinian conflict to spread what he deemed “lies and prejudices” about the Jewish State and pro-Israeli groups in America , and to attack liberal Zionist students. “We cannot allow a new generation of Jews to be intimidated from supporting the very existence of Israel — or to feel shame about their heritage, rather than pride,” he said.

Bloomberg, the founder of Bloomberg L.P. and Bloomberg Philanthropies, was presented at the event with the Gustave L. Levy award, an honor bestowed by the UJA-Federation of New York for vision and generosity.

At the start of his remarks, Bloomberg joked about his failed presidential campaign in 2020, saying he was the only Jewish candidate in the race “who didn’t want to turn America into a kibbutz,” referring to Sen. Bernie Sanders of Vermont, a progressive Democrat.

“Even though it didn’t work out, the good news is: I didn’t have to move to Washington, and I could stay with you in the greatest city in the world,” he told the crowd.

Bloomberg: Partisanship blinds too many Jews to antisemitism within their own parties