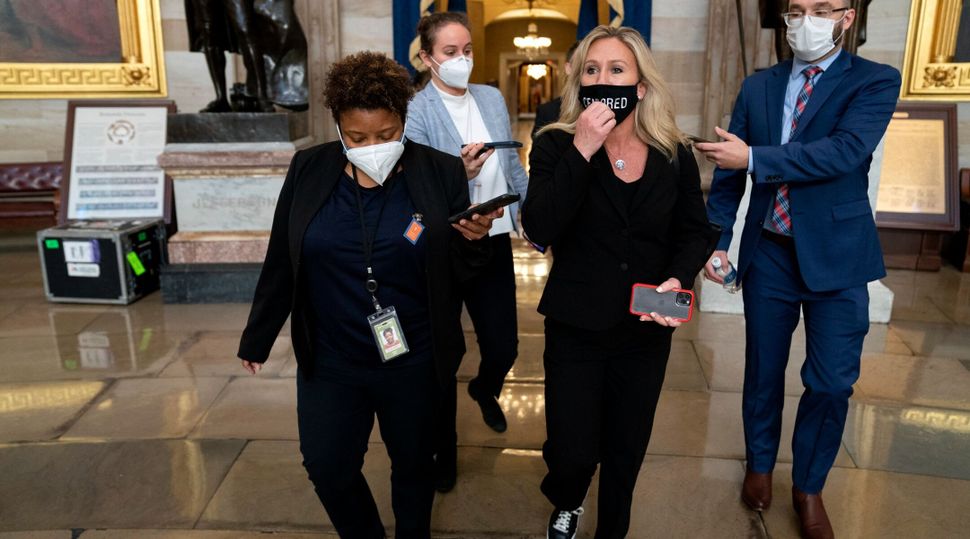 (JTA) — Marjorie Taylor Greene made another comparison between America’s response to the coronavirus pandemic and the Holocaust in an interview on Steve Bannon’s podcast on Tuesday, months after apologizing for making such comparisons at the U.S. Holocaust Memorial Museum.

“They’re ruining our country, these vaccine Nazis,” she said, according to NBC News, noting that she is still not vaccinated.

She added later: “I’m sorry. I know I’m using the word Nazi and everybody gets mad when I say it, but that’s exactly what they are.”

Greene has come under fire several times for comments drawing comparisons between coronavirus public health measures and the Holocaust. In May, she compared a mask mandate for unvaccinated members of Congress to forcing Jews to wear yellow stars in Nazi Germany.

“This woman is mentally ill,” Greene said at the time, referring to House Speaker Nancy Pelosi. “You know, we can look back at a time in history where people were told to wear a gold star. And they were definitely treated like second-class citizens, so much so that they were put in trains and taken to gas chambers in Nazi Germany. And this is exactly the type of abuse that Nancy Pelosi is talking about.”

When asked to apologize by Jewish groups, Greene doubled down.

Greene made a similar comparison in a tweet in May about a supermarket that added logos to vaccinated employees’ badges.

“Vaccinated employees get a vaccination logo just like the Nazis forced Jewish people to wear a gold star,” she said in a tweet.

Greene eventually apologized for her comments and took a tour of the U.S. Holocaust Memorial Museum in Washington, D.C.

“I have made a mistake and it’s really bothered me for a couple of weeks now, and so I definitely want to own it. The horrors of the Holocaust are something that some people don’t even believe happened, and some people deny but there is no comparison to the Holocaust,” Greene said at the time after a private museum tour.

But a few weeks later, Greene was back with another Holocaust analogy, comparing vaccine outreach to Nazi-era thugs.

“Biden pushing a vaccine that is NOT FDA approved shows covid is a political tool used to control people,” Greene, a Georgia Republican, tweeted in July. “People have a choice, they don’t need your medical brown shirts showing up at their door ordering vaccinations. You can’t force people to be part of the human experiment.”