The fifth question: Why is this year’s seder so much more expensive than other seders? The meat aisle at Western Kosher, a market in mid-city Los Angeles. Photo by Louis Keene

Stan and Esther Morhaime reviewed the receipt on the way back to their car. Their stop at a Los Angeles glatt kosher market was one in a series of several grocery trips they planned to make before they host two seders next week. They had just dropped about $400. Esther said the same items might have come out to $350 last year.

That’s a fraction of their grand total for serving a dozen people both nights.

“We’ll spend close to $2,000,” Stan said, with Esther finishing his sentence: “when you consider all the aluminum foil.”

Between the special kosher certification needed for some items, a rush of demand around ritual foods, and the religious imperative to host large meals, Passover has long put a squeeze on the wallet. But a wicked stew of pricing factors you’ve probably heard about — the pandemic, a supply chain crisis, a war and inflation — has given unprecedented sticker shock to Jewish households.

Grocery prices are up nearly seven percent due to inflation, according to the USDA’s Consumer Price Index. Certain categories have seen an even bigger spike. Eggs are up 40%. Cooking oil is up 20%. Poultry — thanks to an outbreak of bird flu — is up 50%. That’s before you get to the Passover-centric staples like grape juice and matzo meal.

The price increases have especially hurt families who were already pinching pennies. Greenfield expects the Met Council to feed about 310,000 people this Passover, an increase of about 10% over last year.

One single mother of three who wrote to the Forward said the only things she bought at kosher markets were meat, cheese and ramen. Packaged kosher goods, she said, were simply too expensive. And in lieu of specialty kosher-for-Passover food, her family would get by with the food she received from a Jewish charity.

“We will eat matzo with spreads and fruits for snacks in between meals and during chol hamoed,” she wrote.

The festival in which Jewish people celebrate their freedom from enslavement strictly prohibits the consumption of bread products or anything that may have come in contact with them. In Orthodox homes, that means not only buying kosher-for-Passover specialty items, but also replacing perishables like milk or ketchup if they’ve been opened. 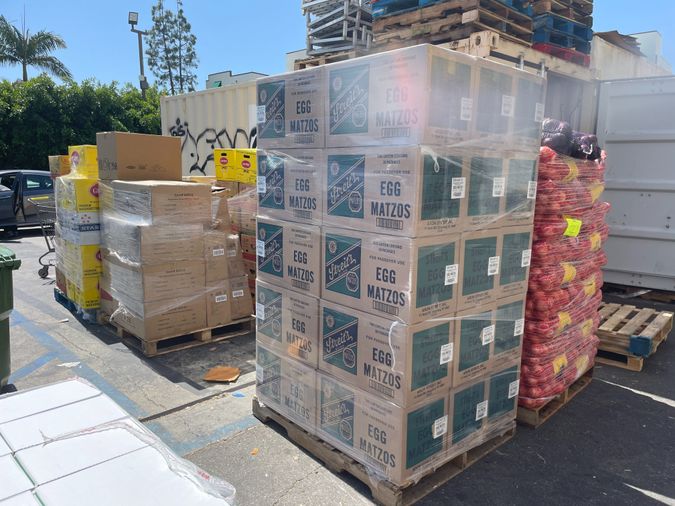 As long as they don’t hike the price of prune juice. Photo by Louis Keene

But Passover is the most widely observed Jewish holiday — surpassing even Yom Kippur — and families who are less rigid can still spend hundreds of dollars to prepare for large meals.

Due to pandemic unemployment — which still lingers in New York City — and the failure of wages to keep up with the rising cost of living, Greenfield said the Met Council is serving thousands of people who had never struggled before this year.

Other recipients had been making just enough to scrape by as a middle-class family, but when it comes to Passover shopping, they can’t make it work.

Rising food prices hit the Met Council too: it launched a $2.5 million emergency fundraiser Friday to cover the increased need.

Hearing the groaning in their aisles, store owners say they don’t have it any easier.

Farzad Kohanzadeh, proprietor of Livonia Glatt Market, in Los Angeles’ Pico-Robertson neighborhood, said a pallet of food that once cost him $250 now costs twice that. The supplier attributed the increase to rising gas prices, which have largely been blamed on Russia’s invasion of Ukraine.

At one point, he sat down with staff to recalculate the prices of chicken legs after the supplier raised the price. By the time he printed new stickers, he had received another notice from the supplier: “As of the first of this month, chicken’s going up another 20 cents,” Kohanzadeh recalled with a sigh. When they’re calling this “real savings,” you know you’re in trouble. Photo by Louis Keene

He wasn’t alone. The manager of a glatt market down the street said prices from his suppliers were up 15 to 20% across the board. That manager said he had noticed that increasingly, customers have been buying only meat and poultry from the glatt markets — and getting dry goods from corporate grocers like Kroger that beat his prices. (But he said that shopping habit was less prevalent leading up to Passover.)

The same squeeze may be affecting Livonia Glatt, too, but Kohanzadeh wasn’t sweating it. There would always be some shoppers who compare prices, he said, and others who value customer service. His store focuses on maintaining a relationship with the community and providing quality products customers trust, he said.

He opened Livonia Glatt in 1999 and had known many of his suppliers that long. They, too, operate on slim margins, he said, and he believed they were doing their best.

“There are so many other businesses and other things that we can do, but we chose to be in this industry,” Kohanzadeh said. “And there is a reason, and that is to really take care of the community and to make sure we are serving the community the best we can.”

The fifth question: Why is this year’s seder so much more expensive than other seders?