Anti-LGBTQ legislation is often billed as defending religion. But Judaism has long supported the idea of a spectrum of sexual and gender identities. 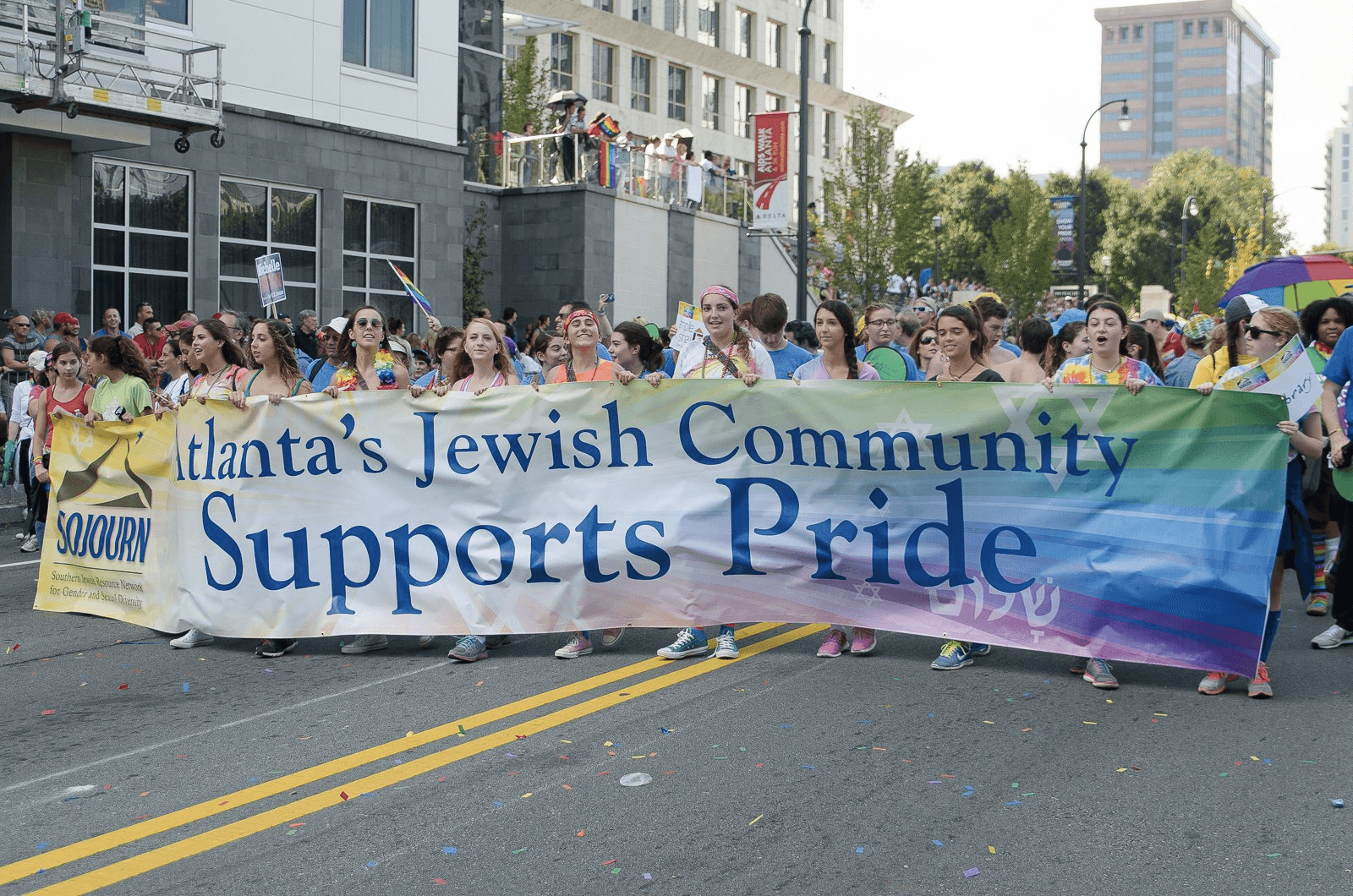 The Southern Jewish Resource Network for Gender and Sexual Diversity was founded by Rabbi Joshua Lesser in 2001 and honored as grand marshal of the 2015 Atlanta Pride Parade. Courtesy of Rose Kantorczyk

But those kinds of moments, Cohen said, have lately become “the only things keeping people proud and out of the closet.”

LGBTQ rights are under a new wave of assault as Republican lawmakers have introduced hundreds of anti-LGBTQ bills nationwide seeking to ban trans youth from playing sports, limit the extent to which teachers can discuss sexuality and gender in the classroom, and more. Perhaps most severely, a recent Texas directive categorized the delivery of gender-affirming care to trans youth as child abuse.

And fear has only increased among queer communities with the news that the Supreme Court is likely to overturn abortion rights, as the legal reasoning behind Roe v. Wade is similar to that which serves as the backbone for many of the court’s rulings upholding LGBTQ rights.

The fact that these laws have “been so easily passed, that there can be laws that affect me significantly one day — that scares me,” said Cohen, who has become active in advocating for trans rights before school boards and politicians. “That day may be coming closer than I thought.” Health experts warn that politicizing a person’s identity can increase stress and stigma, leaving LGBTQ youth at even higher risk of substance abuse and suicide. Nearly half of LGBTQ youth seriously considered attempting suicide during 2021, according to a survey from the Trevor Project.

We spoke to a number of Jewish leaders responding to this wave of anti-LGBTQ legislation about what makes protecting queer youth a Jewish issue. Some, like Cohen, noted that the Talmud mentions six genders. Others highlighted tikkun olam, or the Jewish concept of making the world a better place. And others still spoke to pikuach nefesh, the principle in Jewish law that the necessity of saving a human being’s life comes before almost any other religious rule.

“It is part of my job to make sure that people who are being oppressed and marginalized are being protected and loved,” said Rabbi Eleanor Steinman of Austin’s Temple Beth Shalom.

“That is an authentic expression of the Jewish values I hold most dear.”

“Fighting anti-LGBTQ legislation is who we are as Jews”

More than 30 years ago, Dr. Morissa Ladinsky, who works at the only medical center providing youth with gender-affirming care in the South, got chills at her medical school graduation while reciting the Hippocratic oath.

Now, she’s taking legal action over a law she sees as a threat to that oath’s first precept: Do no harm.

On May 8, Alabama, where Ladinsky lives, became the first state to establish criminal penalties for medical professionals who provide youth with gender-affirming care. Ladinsky is one of seven plaintiffs in a lawsuit filed against the ban.

Her clinic at the University of Alabama at Birmingham, she said, has “helped hundreds of kids become whole — quietly, without bothering anybody, until somehow we became the 2022 midterms’ political wedge issue.”

The case for the necessity of gender-affirming care, she said, is clear. It is associated with a nearly 40 percent drop in depression and suicide attempts, an effect that outlasts adolescence: Trans youth who have access to puberty suppressants, which prevent the irreversible effects of puberty, have a much lower risk of suicide attempts as adults.

In the wake of the new Alabama law, Ladinsky said, “I have to decide between facing potential criminal prosecution and doing harm to my patients.” To her, the choice to continue serving her patients is a religious one: While reading the Haggadah this Passover, she said, she kept thinking that her patients and other LGBTQ Americans are dealing with the same fear as the Israelites who escaped enslavement in Egypt.

The place of religion in queer activism

More than two decades ago, when Joshua Lesser became the rabbi of Congregation Bet Haverim, an Atlanta synagogue founded by and for LGBTQ Jews, he received death threats. Lesser and his parents worried that at any point someone might walk in and shoot him.

After Donald Trump was elected president, Lesser, who is gay, said that his father — then on his deathbed — told him that he was even more afraid that Lesser would be attacked.

These days, Lesser isn’t too scared for himself. But he is scared for trans and gender-expansive children, who, he said, are being made to feel unsafe and “being used as a political tool.”

Lesser said that if he could “wave a magic wand,” he would take religion out of politics. But the influence of the Bible on American politics is undeniable, he said, and he’s found that his religious voice can give him credence with his opponents, allowing him to keep working to move the needle.

For others, religion is a hindrance, not a help, in advocating for LGBTQ rights. Cohen, the trans high schooler, said they find that they can’t talk about being Jewish in activist spaces because “religion has in general been seen as harmful to the queer community.”

And while many sects of Judaism seek to be inclusive of LGBTQ people, taboos remain, particularly in Orthodox communities — including the one in which Cohen was raised, and where they heard rabbis offer coded support for conversion therapy, they said.

They said they would not return to an Orthodox synagogue because of the mechitza, the physical divider between the men’s and women’s sections. But “there are things in the Torah that essentially say, ‘We need to be a bit more open here,’” they said.

A threat to religious freedom

While most of traditional Judaism divides Jews into two genders, notions of gender fluidity date back to the beginning of Jewish thought. Jewish legal writings identify a rainbow of six genders. According to ancient tradition, Mordechai nursed Esther from his own breasts. And Midrash Tanchuma says that Jacob’s daughter Dinah was conceived with the soul of a man, but that God helped her transition into a woman.

Given that wealth of Jewish textual support for the idea of a spectrum of gender identities, anti-LGBTQ bills that purport to defend religion are promoting an evangelical worldview that is “not inclusive of Jewish theology,” said Rabbi Denise Eger, the first openly LGBTQ person to serve as president of the Central Conference of American Rabbis.

Eger said that these bills should alarm the entire Jewish community because they are “the canary in the coal mine” for the destruction of the separation between church and state.

Lesser pointed out that the work that needs to be done involves not only advocating for religious freedom on the local and federal levels, but also ensuring the Jewish world becomes more safe and accepting for LGBTQ people.

When he joined Bet Haverim, he said, the rabbi of his childhood synagogue refused to speak to him — or even acknowledge his presence — because of his sexuality. Lesser, now Bet Haverim’s rabbi emeritus, said that he hopes that his work has helped spare others from similar experiences, but warned that that kind of progress can be easily undone by ongoing anti-LGBTQ legislation.

It is important for Jews to continue to develop active practices for protecting LGBTQ youth and allow them to have a “full sense of who they are as spiritual beings,” he said.

“I don’t want someone to just find that in a congregation — I want our kids to grow up in a country that tells them that their being is essential, beautiful and loved.”

Rudy Malcom is a digital reporting and writing intern at the Forward. He is a Poynter-Koch Media and Journalism Fellow and can be reached at [email protected] or on Twitter @rudy_malcom.