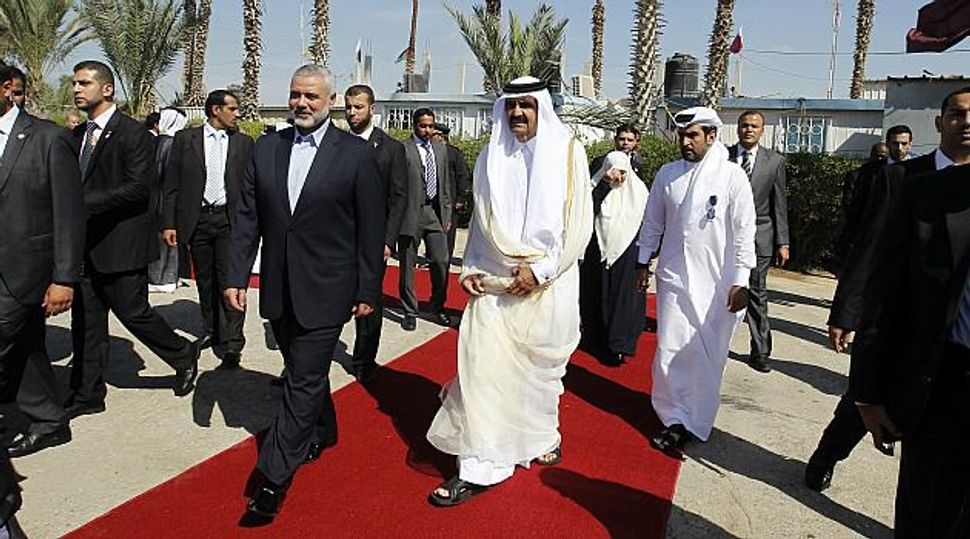 WASHINGTON (JTA) – Five Arab nations cut ties with Qatar on Monday, escalating a long-simmering competition for preeminence in the region into actions that could set the stage for war.

Saudi Arabia, which is leading the charge, has cut off Qatar’s only land crossing – and what one Saudi-friendly estimate says is as much as 40 percent of the tiny emirate’s food supply. The other four nations cutting all ties with Qatar are Egypt, the United Arab Emirates, Bahrain and Yemen.

Meanwhile, Iran is pledging humanitarian support for Qatar. Given Iran’s propensity for meddling and its relative military strength, any robust Iranian assistance to the emirate could further unsettle the region.

The tensions come as President Donald Trump hopes to align U.S. allies in the region – including Saudi Arabia, Qatar, and Israel – in a united front to contain Iran and crush Islamist terrorists.

What’s fueling the crisis and what does it mean for Israel?

Containing Iran’s influence is the number one priority for Saudi Arabia. The oil-producing behemoth has watched with alarm as Iran has exploited regional unrest to expand its influence in nations where the Saudis once had considerable sway — including Syria, Iraq, Lebanon and Yemen. The Saudis, like Israel, also believe that Iran has ambitions to become a nuclear weapons power.

Qatar houses the largest U.S. airbase in the region and has contributed to efforts to roll back Iranian ambitions in Syria. But it is also a small nation that has for years sought to appease the looming giants surrounding it — the Saudis to the south and west, the Iranians across the Persian Gulf. Qatar shares a gas field with Iran, signed a security agreement with the country and was almost alone among Gulf states in welcoming the 2015 Iran nuclear deal that Saudi Arabia and Israel revile.

“Qatar is a small country that survives by balancing its friends against its enemies and not making clear who are the friends and who are the enemies,” said Simon Henderson, a fellow at the Washington Institute for Near East Policy.

It’s about the Muslim Brotherhood

Qatar’s ruling Al-Thani clan has been supportive of some of the Islamist movements that have long roiled the region. It was especially galling to Qatar’s neighbors that precisely in the period following the Sept. 11 attacks, when governments in the region were seeking to suppress the extremist Islamist tendencies that underpinned the terrorists’ ideologies, Qatar continued to help nurture Islamist movements. Egyptian President Abdel Fattah al-Sisi especially resents Qatar for its backing of the short-lived Muslim Brotherhood presidency of Mohamed Morsi, whom al-Sisi ousted in 2013.

For years, the emirate has offered safe haven to the leadership of Hamas, the Brotherhood affiliate that runs the Gaza Strip. And in 2014, it joined with Turkey in attempting to broker an end to Hamas’ war with Israel that would have been friendlier to Hamas than Israel wanted. Egypt intervened and helped Israel impose an end to the war that was more to Israel’s liking, and that kept Hamas isolated.

Qatar houses and underwrites Al-Jazeera, the muckracking, at times pro-Islamist and generally provocative satellite television channel that has proven an irritant to Egypt, Saudi Arabia and the other regimes. Depending on who is talking, Qatar’s critics hate the light the network casts on their oppression, or are sick and tired of what they see as its agenda-driven “fake news.”

Sultan Sooud Al Qassemi, a UAE-based columnist for Newsweek, says that the nations effectively blockading Qatar want nothing less than for the channel to be shut down.

The father of Qatari leader Sheikh Tamim Bin Hamad Al-Thani, who relinquished power to his son in 2013, seized the country from his own father in 1995 in a coup, prompting Saudi Arabia to attempt at least one counter-coup to reinstall the father. In recent weeks there have been ugly tit-for-tat exchanges between partisans of the Qataris and the Saudis over which clan was more compromised in the distant past by dalliances with British colonials and (horrors!) their women.

Also seen by Qatar’s neighbors as bad form, according to the Financial Times: $1 billion paid by Qatar to Iranian officials and an al-Qaeda affiliate to free 26 members of the ruling clan who had been on a falconry expedition in Iraq. (No word on the status of the birds.)

Trump’s message last month when he visited Saudi Arabia and addressed regional leaders was twofold: Let’s unite to crush terrorism and contain Iran and what you do on your own time is not our business. It looks like the Saudis were listening.

The Qatari crisis isn’t the first time Trump’s winks and nods precipitated trouble. Just days after top Trump officials said last month they would be okay with the Assad regime in Syria outlasting the civil war – another break with years of U.S. policy – the Syrian regime allegedly launched its worse gas attack on civilians since 2013.

Trump himself has also made contradictory noises about Qatar. In a meeting with Al-Thani in Saudi Arabia last month, Trump referred to Qatar’s purchase of “beautiful military equipment” from the United States. But in a tweet early Monday after news of the Saudi squeeze broke, Trump wrote: “During my recent trip to the Middle East I stated that there can no longer be funding of Radical Ideology. Leaders pointed to Qatar – look!”

Five Arab nations just pulled off what Israeli Prime Minister Benjamin Netanyahu has for years wished the West would do: Exact a painful price on a nation for flirting with Hamas and Iran.

Qatar was the only Persian Gulf nation that, from 1996 to 2000, allowed Israel to run a semi-diplomatic mission – a business interests section – on its soil. Its consistent posture on the boycotts that so aggravate Israel is that they are counterproductive. It has hosted Israel at its tennis tournaments and said that, should it win a spot, Israel would be welcome when it hosts the World Cup in 2022. The late Shimon Peres, when he was deputy prime minister, in 2007, made a high-profile visit to Qatar.

Jonathan Schanzer, a vice president at the Foundation for Defense of Democracies, said the Israelis have “not been happy with the presence of Hamas in the capital of a major U.S. ally.” On the other hand, he said Israel has been working with Qatar since 2014 to keep the Gaza Strip from collapsing into chaos.

And while Israel’s outward posture toward Iran has been one of confrontation, it is not unappreciative of efforts by Qatar to moderate the Iranian regime, if only because that could mitigate the dangers of a regional arms race, said Anthony Cordesman, who holds the Burke Chair in Strategy at the Center for Strategic and International Studies.

“From Israel’s viewpoint, you have to decide if you want a constant arms race or you want the kind of pressure on Iran that will moderate it,” he said.

What should Israel do?

Stay out, stay quiet. There’s no upside to buying in, said Cordesman.

“The best position is to hope that if Israel stays out of this, what you will get is a compromise that will, on one hand, put more pressure on Qatar in terms of Islamic extremism, particularly the financing of extremists, but it will not freeze the situation with Iran as a whole,” he said.