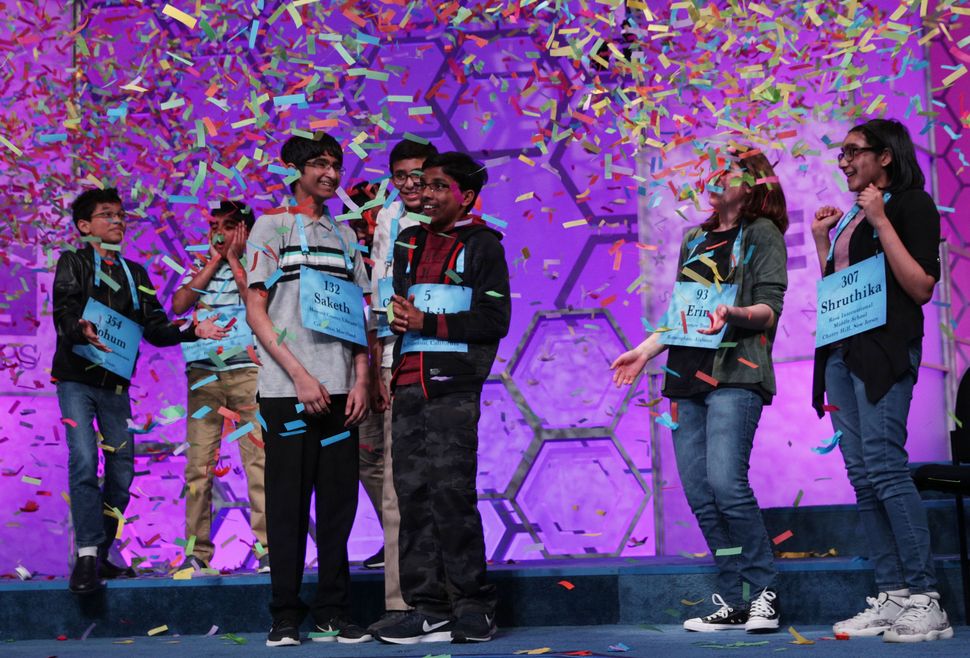 The eight co-winners of the Scripps National Spelling Bee. Image by Getty

You might think that the biggest news to come out of the 2019 Scripps Spelling Bee would be the historic eight-way tie in which the competition ended.

Well, you’d probably be right. But what about the Jewish news?

Several of the high caliber words posed to contestants were either Yiddish or Hebrew, joining the many other difficult-to-decipher words from Russian, Sanskrit, Persian and the like that have been lobbed from the judge’s table over the years.

We heard “yiddishkeit” — the first word of the competition. The word — it’s from Yiddish, you might have guessed — sums up Ashkenazi Jewish culture in a manner akin to the term Americana.

“Yiddishkeit. Can I have the language of origin?”

Then, the same contestant who got “yiddishkeit” at the outset got another Jewish word: “keriah,” the act of rending a garment as a symbolic gesture of grief after a loved one dies. (Many Jewish funeral homes pass out black ribbons to affix to one’s clothes and cut with a scissors at Jewish funerals to comply with this tradition.) This contestant, Rishik Gandhasri, 13, from San Jose, California, would go on to be one of the co-winners of the competition.

In the final round, one contestant received “tophet,” a word with a very complex history: It is, on the one hand, the location recorded in the bible where members of the Canaanite religion would sacrifice children to the god Moloch, in the valley of Gehinom below the future site of Jerusalem. It has since become a word for hell in Jewish tradition — that’s the definition listed in Merriam-Webster.

Finally, and on a lighter note, a contestant was asked to spell “holishkes,” the Yiddish word for savory stuffed cabbage.

It is one thing that these words are very, very Jewish. But they are also deep cuts: one Forward staffer was unaware that holishkes is Yiddish for stuffed cabbage, despite having grown up eating the food. Others did not know that tophet is a thing. (The other Jewish word for hell, “gehenna,” is much more commonly used, relatively.) And while many Jews who have gone to a Jewish funeral have seen or performed keriah, not all would have heard the name for the practice. Most people just call honey cake, honey cake, and not lekach.

The Jewish words aren’t just included for the sake of linguistic diversity — they’re some of the hardest words for contestants to spell, according to a FiveThirtyEight analysis. The Hebrew words in particular have historically been the least likely to be spelled correctly — less than Sanskrit, which some scholars consider to be a dead language!

It is worth noting that the winning words for each of the eight winners — the last words the judges required them to spell before crowning them co-victors — were decidedly goyische: auslaut, erysipelas, bougainvillea, aiguillette, pendeloque, palama, cernuous. Though, in the spirit of infusing as many things as possible with Jewish meaning, we will also note that one of the symptoms of Familial Mediterranean Fever, a disease that primarily effects Jews of Sephardic heritage, is a skin condition that looks similar to the rash called erysipelas: erysipelas-like erythema.

This is, of course, not the first time the Bee has relied on Jewish or Yiddish words. In 2013, Arvind Mahankali’s winning word was “knaidel,” the singular form of the Yiddish word for matzoh ball (though defined by many dictionaries as a Jewish soup dumpling), much more familiar in its plural form, “knaidlach.”