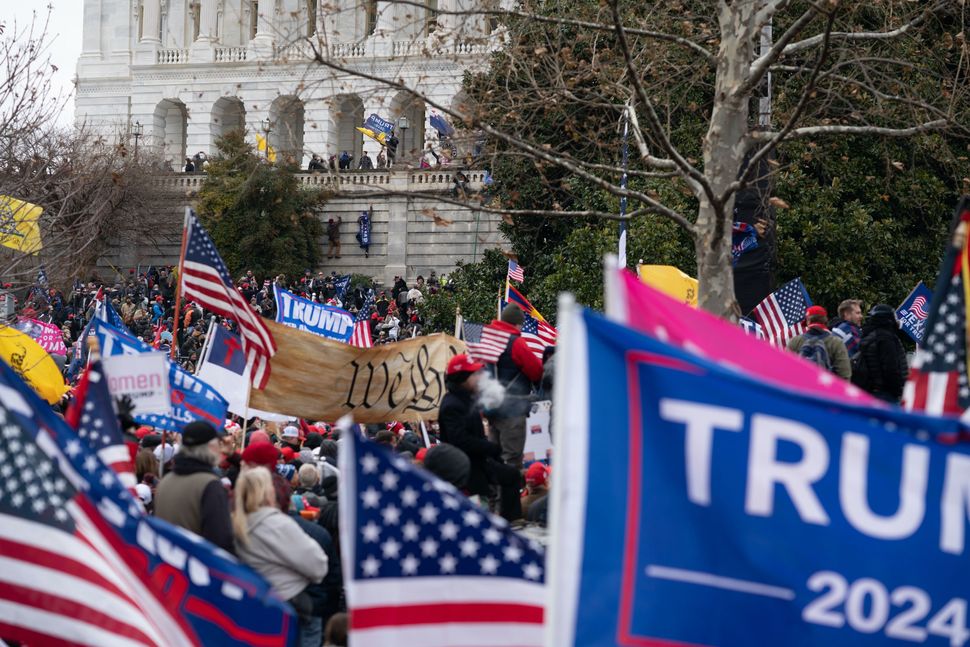 Protesters breach the walls of the U.S. Capitol building in Washington, D.C. Wednesday following a “Stop the Steal” rally outside the White House. Image by Michael Zhang for the Forward

The mob of far-right protesters who broke through lines of federal police to storm the U.S. Capitol Wednesday was the culmination of 36 hours of rallies in Washington, D.C. that featured antisemitic conspiracy theories and false claims that a prominent Jewish American stole the November election from President Donald Trump.

“We are standing up against the evil globalists such as George Soros, who thinks he owns our politicians, who thinks he owns Chief Justice John Roberts on the Supreme Court,” Jennifer Lawrence, a former reporter for Breitbart News, told a crowd at a “Stop the Steal” rally Tuesday.

Shortly before the violent breach, Rep. Mary Miller, an Illinois Republican, praised Adolph Hitler in a speech outside the Capitol.

“Hitler was right on one thing: he said whoever has the youth, has the future,” Miller told a crowd waving Trump flags.

“Hitler was right on one thing.”

And those who made it inside the Capitol building included notorious white supremacists and others donning overtly antisemitic imagery. One man in the crowd wore a “Camp Auschwitz” sweatshirt while others waved the Confederate flag and a banner modeled after a Nazi flag.

As early footage emerged of demonstrators knocking down barricades and wrestling with police, many political observers reacted with shock. Matt Brooks, executive director of the Republican Jewish Coalition, shared a prayer for federal law enforcement officers.

“Protesters must stop now,” the coalition tweeted. “We support peaceful protest, but storming the halls of Congress and the Capitol building is unacceptable. We condemn these actions. G-d bless the @CapitolPolice.”

But the criminal mayhem was cheered on from the dark corners of the internet, including the neo-Nazi website The Daily Stormer and the chat of a livestream from inside the Capitol, where one person wrote “OY VEY not anuddahshoahh,” a reference to the Shoah, or Holocaust. On 4chan, a photo of a law enforcement official in the Capitol was met with comments like “KILL ALL [N-word] AND COPS AND JEWS.” 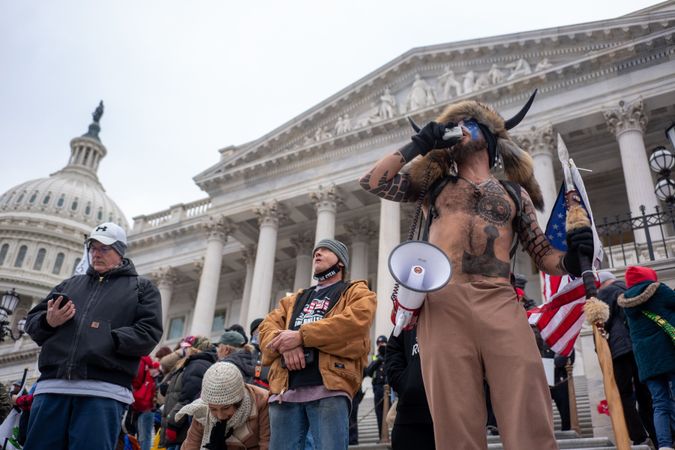 Trump supporter Jake Angeli, who also promotes the QAnon conspiracy theory, pictured outside the U.S. Capitol building. Angeli, who has Norse symbols often used by white supremacists tattooed on his torso, broke into the Senate chamber Wednesday. Image by Michael Zhang for the Forward

A shirtless man wearing a Buffalo headdress ascended the dais in the Senate chamber with two Norse symbols used by white supremacists prominently tattooed on his torso.

By the time that Washington, D.C., police officers and those from neighboring departments, along with National Guard troops, drove protesters from the Capitol, windows had been shattered, doors wrenched open, and a woman had been fatally shot dead. Congress later reconvened to debating certifying the Electoral College’s vote, and by early Wednesday Joe Biden’s election as the 46th president had been fully confirmed.

The violence was widely condemned across the political spectrum, including among Trump supporters like Nachman Mostofsky, executive director of Chovevei Zion, who had flown to D.C. for the rally Wednesday.

“Rioting is un-American,” Mostofsky said in an interview. “The leaders of the riots are grifters,” he added. “They aren’t patriots. They aren’t conservatives.”

Others were stunned that Capitol Police, who regularly arrest activists for simply holding posters inside Congressional buildings, could be so easily overrun and then allow the hundreds of demonstrators who entered the Capitol to freely leave.

“This is a case where the system has failed us.”

Nadine Bloch, a veteran Jewish activist and member of Beautiful Trouble, said she has been protesting in D.C. for decades and was once arrested for yelling in the Senate gallery.

“This is about the authorities failing to do their job and protect our Constitution and our limited democratic process,” Bloch said. “This is a case where the system has failed us.”

Many of the protesters outside the Capitol Wednesday evening sought to distance themselves from the criminals who broke into the building earlier that day.

“No one was storming the Capitol,” Darren Cantrell, who traveled from Wisconsin, told a Forward correspondent. “I wasn’t storming anything.”

Trump himself, who kicked off the day’s events with a rally outside the White House in which he spouted baseless claims about voter fraud, praised the riot on social media.

“These are the things and events that happen when a sacred landslide election victory is so unceremoniously & viciously stripped away,” Trump said, while also calling on protesters to “stay peaceful” and leave.

Sen. Charles Schumer, the New York Democrat who is expected to soon become the Senate’s Majority Leader, caustically replied to the president: “It’s a little late for that. Don’t you think?”

(The mayhem on Capitol Hill distracted from the news that Democrats had prevailed in the two Georgia Senate runoffs Tuesday, handing Schumer’s party the chamber and positioning him to become the first Jewish Senate Majority Leader.)

And Trump’s weak call for protesters to return home was not enough even for many stalwart Trump allies, including former New York Assembly member Dov Hikind, who backed the president’s reelection but said Trump’s promotion of wild conspiracy theories about the election led to the violent outbreak on Capitol Hill.

“We Jews, especially, should think twice about what we accept as the truth,” Hikind said. “Things were sold to the people in Germany about the Jewish people that they accepted and they bought it and it resulted in terrible, terrible things.”

“We Jews, especially, should think twice about what we accept as the truth.”

Those who study extremism and the far-right agreed that Wednesday was a violent escalation without precedent in American history that should alarm Jews and other minority groups.

David Walsh, a postdoctoral fellow at the University of Virginia who studies the far-right, agreed the storming of the Capitol by protesters was unprecedented.

“So many of the insurrectionists either are explicitly into QAnon or hold QAnon-affiliated beliefs,” Walsh said. “QAnon is, to a great extent, repackaged blood libel.”

Jewish Twitter lit up Wednesday afternoon with reported sightings of Nazi flags and swastikas in live video feeds from the Capitol. One commonly shared video provided only ambiguous evidence of a Nazi flag. But another flag favored by white supremacists can be clearly seen in pictures and video: a green banner representing the fictional nation of “Kekistan” that, according to the Southern Poverty Law Center, is modeled after a Nazi military flag.

Prominent white supremacists were also in the crowd at the Capitol, including Nick Fuentes, leader of white supremacist group Groyper Army, and Tim Gionet, known online as “Baked Alaska,” who was banned from Twitter for posting an image showing Jewish far-right agitator Laura Loomer in a gas chamber.

“Extremists must be taken at their word,” Jonathan Greenblatt, the ADL leader, said in a statement. “First there was volatile rhetoric online, then explicit calls to violence and now people are acting on those calls in the nation’s capital and flagrantly breaking the law. It must end now. 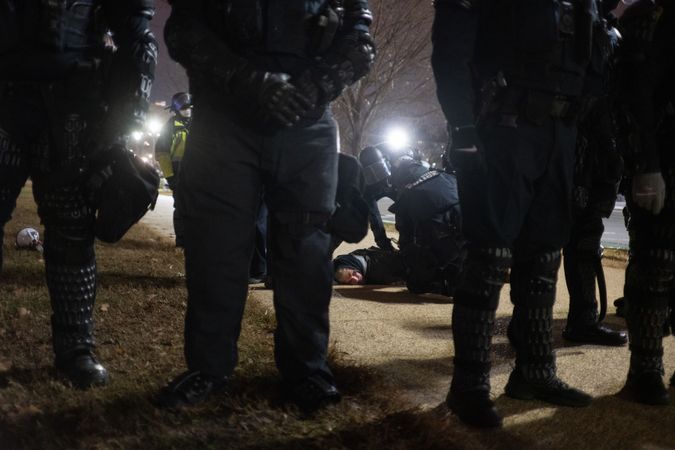 A man is arrested by police outside the U.S. Capitol Wednesday night after extremist protesters stormed the building earlier in the day. Image by Michael Zhang for the Forward

But the demonstrators who remained on the streets outside the Capitol following D.C.’s 6 p.m. curfew Wednesday night were adamant that their cause had nothing to do with bigotry.

“Look at the people who are part of this,” said Eric Warren, a rally attendee from Las Vegas who was standing in a crowd of other white demonstrators outside the Capitol. “It’s multiracial, just like Trump’s coalition.”

Dean Underwood, who was standing along the police line nearby, traveled from Texas and said he was tear gassed earlier in the day.

“We were trying to stop the Constitution from being overthrown,” Underwood said. “The police are working to overturn the law. That’s what Nazi Germany is all about — the police overthrow the law, and then they claim they are the law.”

The raucous scene outside the Capitol before demonstrators broke in also featured odd invocations of Judaism.

Far-right Orthodox Jewish activist Heshy Tischler appeared in a video from D.C. with a man wearing a shawl decorated with the Virgin Mary blowing a shofar.

Walsh, the historian, said that the events on Capitol Hill were only the most dramatic example from the past ten years of escalation in political violence from the far-right. He warned that these incidents are typically a sign of worse things to come.

“Once this type of thing starts,” Walsh said. “it will generally happen again.”