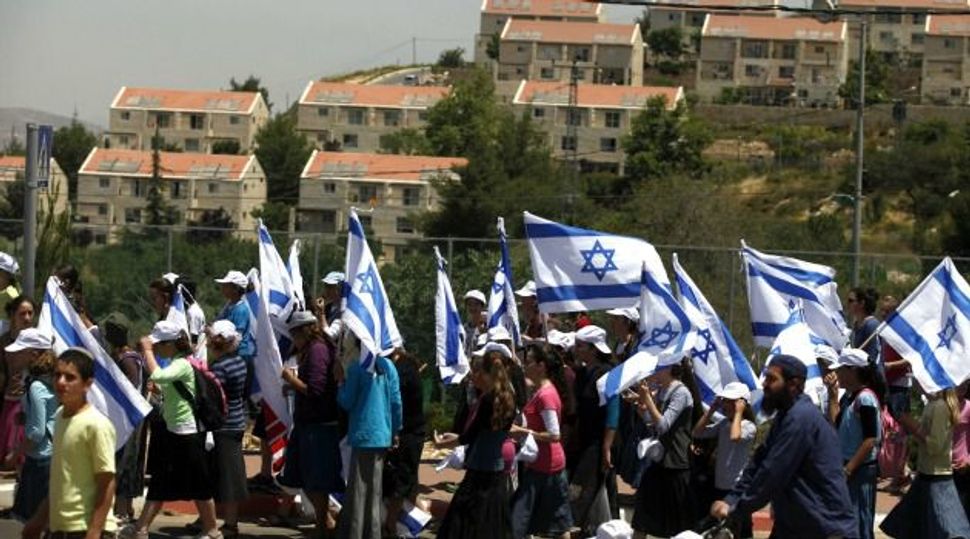 Thumbing Its Nose: Why should Israel care what the world thinks about the occupied territories? Because it may just need the world?s help in dealing with other issues, like the threat from Iran. Image by getty images

A friend wrote in last week to dispute my critique of Israeli judge Edmond Levy’s settlements report. Levy claimed the West Bank isn’t “occupied” under international law, and therefore settlements aren’t illegal. I wrote that while his interpretation squares with the language of the relevant treaties, not one nation in the world accepts it, so it’s meaningless.

I don’t usually answer my mail in public, but my friend raises some important issues. They’re particularly crucial right now, because they’re closely linked to something of more immediate urgency: the Iranian nuclear crisis. It could reach the boiling point in the coming months. Levy’s report is a critical pawn in an apocalyptic chess game.

Here’s what my friend wrote: “Levy renders a legally correct opinion but it should be rejected, because the world doesn’t like it? Had we accepted such reasoning, there would be no Israel. Our claim to Judea & Samaria isn’t perfect. But it’s as good as anyone else’s.”

That’s a tangle of questions. Let’s start with the easy part: Does the world’s opinion really matter? Well, Levy seems to think so. After all, it was the world, acting through the League of Nations, that voted in 1922 to enshrine the Balfour Declaration in international law, formalizing the Jewish people’s right to a “national home” in Palestine, as Levy notes.

It was also the world, gathered in the United Nations General Assembly, that voted in 1947 despite furious Arab opposition to call for a sovereign Jewish state in Palestine. And it was the world, via the U.N. Security Council, that voted in 1967 to demand Arab acknowledgment of Israel’s “sovereignty, territorial integrity and independence” — in return for Israeli withdrawal “from territories occupied in the recent conflict.”

Israel has claimed since 1967, for reasons I explained last week, that the West Bank isn’t “occupied” under the terms of the Fourth Geneva Convention, the treaty that forbids settling one’s own civilians in occupied territory. No other nation buys this reading. Only America’s veto has kept the Security Council from imposing sanctions for what others deem Israeli violations. After 45 years of quarreling, Israel is increasingly losing the international consensus that midwifed its birth.

What’s so urgent now? Just this: Iran is at most a year or two from nuclear weapons capability, according to every Western intelligence assessment. If Iran gets the bomb, Saudi Arabia and Egypt will follow, and the world’s most turbulent region and main fuel depot will become a powder keg. It’s not only Israel’s problem. But only Israel is threatened with extinction. So Israel needs its allies to stay allied. This is a terrible time to stir outrage.

President Obama has engineered devastating international sanctions, even bringing Russia and China along. Sanctions may not suffice, though. “Everything that’s been tried until now has involved convincing the Iranians to stop,” former Israeli national security adviser Uzi Arad told me. It might work. If not, the next step is blunt force.

Israel’s top defense professionals have argued for months against a military strike, but opposition is wilting in the face of events. How soon? Former Israeli deputy defense minister Ephraim Sneh, an ex-general who’s close to Defense Minister (and Iran super-hawk) Ehud Barak, was in Washington on July 12 reporting that Israel sees a window of no more than two months before it’s forced to attack. Any later and the weather will prevent it, he told the Israel Policy Forum. Next spring will be too late.

Can Israel pull it off? French President Francois Hollande told the Israeli daily Maariv on July 13 that Israel has the capacity to “humiliate” Iran militarily. He worries, however, about the regional and even global instability that would follow.

Here’s where Levy and the West Bank come in. If sanctions and diplomacy don’t work, things could get messy. That’s when Israel will need friends.

The fallout could go in two directions. In the best case, America will hit Iran’s nuclear installations in a quick, surgical attack, terrifying the mullahs into backing down and accepting highly intrusive inspections. Arad, who was Netanyahu’s closest security adviser for two decades until last year, thinks this will work as long as Tehran knows that restarting the centrifuges means another attack.

What’s required, he says, is that America stay committed. “The American role is absolutely essential for the long haul, in the months and years after an American strike,” he said. “American brawn is indispensable, and Israel should take that into account. Israel’s strategic position should be taken in close consultation and in concert with its major allies,” especially America, but also Britain and France, “which see eye to eye” with Washington.

What worries Arad is that Israel isn’t acting like an ally. On the contrary: “We spent a year trying to score points in speeches, instead of focusing on what was urgent.”

“If we Israelis believe our first priority, our highest existential urgency, is blunting Iran, and America is our ally in this effort, and the American president comes and says, ‘Look, it’s in my interest — mine, not the Palestinians’ — that you freeze settlement activity for a year,’ then why not do that in order to forge a closer relationship?”

Talking to Washington officials, says Arad, who handled the prime minister’s Iran portfolio until last year, “there was a sense that scoring points was uncalled for at a time when what was needed was to stand shoulder to shoulder, if it is indeed an existential issue.”

That’s the optimistic scenario. The pessimistic one — the one the heads of Israel’s armed services are quietly discussing among themselves — sees Israel attacking, Iran hitting back, oil prices doubling and bombs exploding on six continents. At that point, Israel will need more than just a friendly White House. It will need friends around the world who won’t blame Israel for oil shortages and terror attacks. It will need Europe, still Israel’s biggest trading partner, to keep the lines open despite inevitably fierce domestic pressures. It will need airlines to keep landing, credit to keep flowing, reliable oil supplies.

In a word, it will need legitimacy. The way to achieve that — the only way, say Sneh and his allies in the General Command and Shin Bet — is to reach a peace settlement with the Palestinians. Close the deal that Ehud Olmert nearly completed with Mahmoud Abbas. Talk to the Saudis about their Arab Peace Initiative, which begins with an Israeli-Palestinian deal and ends with Saudi and other embassies in Tel Aviv. It’s essential, the Saudis and Gulf states make clear, if they’re to weather street protests after the bombs fly. Obviously it’s more complicated than it was a year ago, but it’s still possible — and infinitely more urgent. The last thing that’s needed is a Levy-style poke in the eye.

Arad, the inveterate hawk, isn’t convinced a deal is possible. But forward movement is necessary. “The point is to do something — don’t just stand there.”