Shimon Peres Talks with NYT About Iran and Bibi 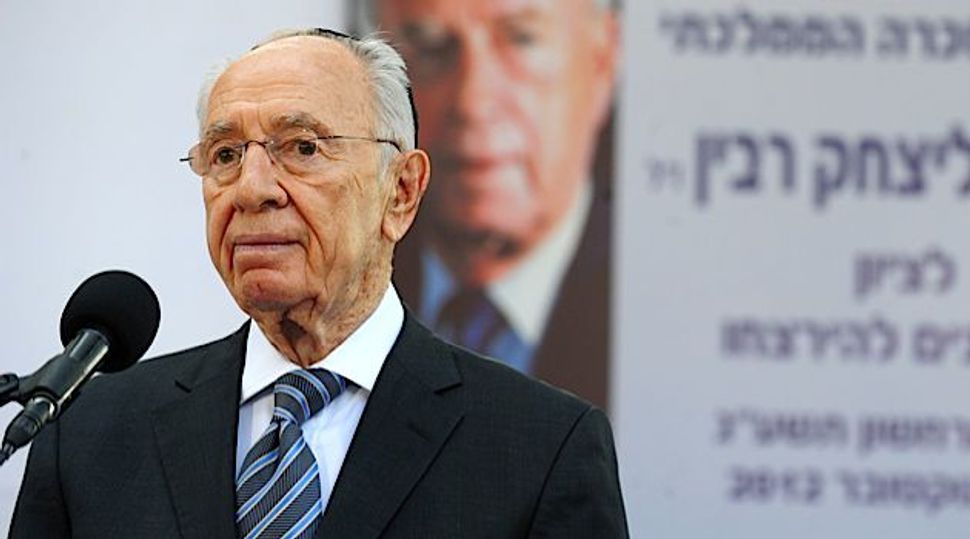 “There are two things that cannot be made without closing your eyes — love and peace. If you try to make them with open eyes, you won’t get anywhere,” Shimon Peres tells Ronen Bergman in an illuminating interview in this weekend’s New York Times Magazine.

While the 89-year-old President of Israel tells the journalist he “asks foolish questions,” Bergman gets frank answers from Peres on Obama, Iran and the path to peace in the Middle East. Throughout the piece, a theme of challenging relationships — between Peres and Netanyahu, Israel and the U.S. and Israel and Iran — emerges:

It’s no secret Peres and Netanyahu don’t see eye to eye on diplomacy. In the interview, Peres speaks out on the harsh consequences he believes will come from the Prime Minister’s approach:

If there is no diplomatic decision, the Palestinians will go back to terror…the silence that Israel has been enjoying over the last few years will not continue, because even if the local inhabitants do not want to resume the violence, they will be under the pressure of the Arab world…Most of the world will support the Palestinians, justify their actions, level the sharpest criticism at us, falsely label us a racist state. Our economy will suffer gravely if a boycott is declared against us. The world’s Jews want an Israel they can be proud of and not an Israel that has no borders and that is considered an occupying state.

The President also opens up about the relationship between Obama and Netanyahu:

The problem is that Obama would like to reach peace in the Middle East and has to be convinced that Israel agrees with this. He demanded an end to settlements and got a negative response, and they [members of the Likud-led government] are to blame for the ongoing activity in the settlements. President Obama thinks that peace should be made with the Muslim world. We, the State of Israel, do not appear to be thinking along those lines.

Despite his candor, Peres only pushes his opinion so far on the record. When asked about Netanyahu’s thoughts on military attacks on Iran’s nuclear sites, he would only say, “Israel cannot solve the problem alone. There is a limit to what we can do.” He decided instead to express confidence in America’s course of action:

I cannot tell you what Bibi’s considerations are on the subject of Iran. I am not his spokesman and also not [Defense Minister Ehud] Barak’s. That’s not my job. I am not looking for confrontations with them. I do think that I can explain the American pattern. America knows how to throw a punch when it has to, in order to keep the world balanced. But the punches follow a set procedure. They don’t begin by shooting. They try all the other means first — economic sanctions, political pressure, negotiations, everything possible. If none of this works, then President Obama will use military power against Iran. I am sure of it.

Peres concludes that he is a “confirmed optimist” and says “faith triumphs more often than cynicism or skepticism.”

“If I have another 10 years to live,” Peres tells Bergman, “I am sure that I will have the privilege of seeing peace come even to this dismal and wonderful and amazing part of the world.”

Shimon Peres Talks with NYT About Iran and Bibi