Pope Benedict Leaves Behind Mixed Record of Relations With Jews 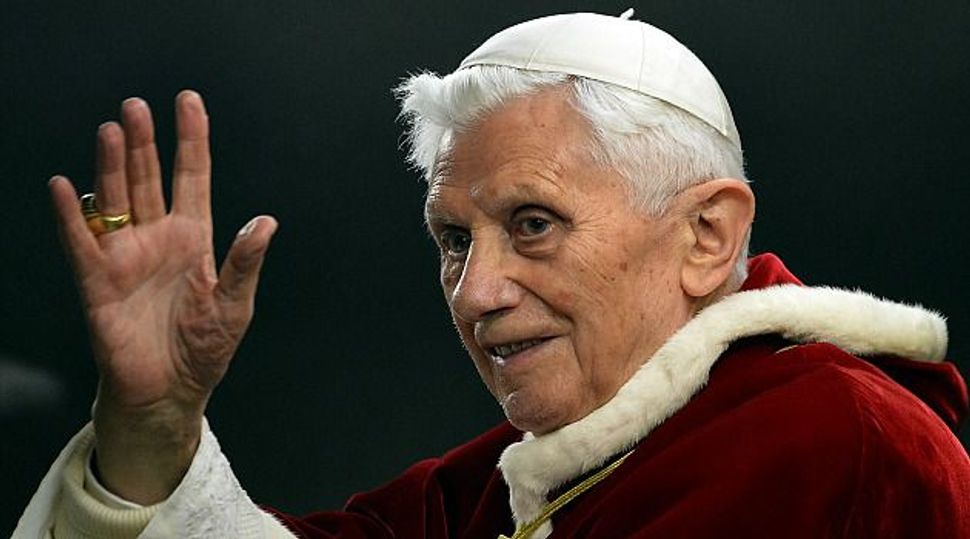 Double-Edged Sword: Pope Benedict was in many ways a contradictory figure who moved the church forward in some ways and took it back in others. Image by getty images

With his resignation announced this week, Pope Benedict XVI opened the door both to reflection on his contributions to Catholic-Jewish relations and to concerns about where his unknown successor will lead the church. Benedict brought to his position a formidable intellect — one, however, most inclined to focus on complex theological ideas. This has shaped many of his dealings with the Jewish community.

While his words and actions toward Jews were generally positive, he did not always foresee how his stances on internal Catholic issues would impact Catholic-Jewish relations. His papacy made it clear that its new teachings about Jews still pose deep challenges to Catholic self-understanding. This points to the need for ongoing dialogue between our communities.

On the one hand, Benedict walked in the enormous footsteps of his predecessor, Pope John Paul II, making numerous gestures of deep symbolic meaning for the Jewish community. He visited Israel, also praying in Jewish fashion at the Western Wall, inserting a prayer, this time for peace, into its cracks. This acknowledgment of the holiest Jewish site helped undo the Christian attempt, beginning in the fourth century, to negate its Jewish past by moving Jerusalem’s holiest site westward to the Church of the Holy Sepulchre and converting the Temple Mount into a garbage dump.

Benedict met with and deepened dialogue with Israel’s chief rabbis. The Holocaust remained on his agenda as well; he visited Yad Vashem while in Israel and Auschwitz earlier in his papacy. There he recalled his predecessor’s visit, but also spoke explicitly of his own German roots.

He also made sure to visit numerous synagogues, received many delegations from the Jewish community, and pledged repeatedly to uphold the Second Vatican Council’s 1965 teachings about Jews and Judaism that had opened the door to today’s positive relations between the two communities. These include his explicit affirmation that the Church must not actively concern herself with the conversion of the Jews today, something obviously of vital concern to Jews (and a precondition for dialogue), and his regular references to Jews as the Chosen People, affirming that their covenantal relationship with God remains intact. He also went much further than John Paul in affirming the validity of Jewish approaches to the Bible and the need for Catholics to learn them.

On the other hand, some issues on Benedict’s agenda led to actions and statements that generated deep criticism and discomfort from the Jewish community. One of his stated goals as pope was to foster Christian unity. In this capacity, in 2007 he reached out to conservative factions by broadening permission for Catholics to celebrate mass in Latin, using the 1962 pre-Vatican II text that contains a prayer for Good Friday titled “for the conversion of the Jews.” This describes Jews as having veiled hearts and being blind and in darkness.

In contrast, the 1970 text is a prayer “for the Jews,” which petitions God to help Jews become better Jews.

Eventually, after an outcry from Jews and Catholics, the pope issued a revised Latin prayer, removing the insulting language, but retaining the title and the petition that Jews come to “recognize Jesus Christ as the savior of all men.” Subsequently, Cardinal Walter Kasper clarified that this prayer refers to the time of Jesus’ second coming, and not today; this defused this crisis

Then, in 2009, the Pope reached out specifically to the Society of St. Pius X, a conservative group that rejected the teachings of the Second Vatican Council. He offered to lift the excommunication of their bishops and invited them to realign themselves with Rome. Jews were immediately concerned; not only did this group’s rejection of the council’s teachings include its teachings about Jews and Judaism, but Bishop Williamson had shortly beforehand publicly denied the historicity of the Holocaust. Jewish concerns were heard; today this breach remains unresolved. Recently, when another of these bishops referred to Jews as “enemies of the church,” the Vatican quickly condemned his words.

Other examples of tensions could be cited, mostly cases where the inner logic of Catholic theology creates a necessity incomprehensible to the Jewish mind. This includes: the move to canonize Pope Pius XII as a saint before fully clarifying his role in the Holocaust; or, before Benedict became pope, his failure to exclude Jews from the 2000 Dominus Iesus’ universal requirement of faith in Christ; or We Remember: A Reflection on the Shoah, the document published in 1998 by the Catholic Commission for Religious Relations with the Jews, which was an apology that came from Christians but not the Church.

Most of these were failures of communication, not substance. Only further and deeper dialogue and friendship will allow Jews and Catholics regularly to understand each other’s concerns and consistently to speak in a voice that the other will readily understand. Hopefully, Benedict’s successor will live a life of dialogue, while walking in the footsteps of his immediate predecessors.

Ruth Langer is a professor of Jewish studies at Boston College and the associate director of the Center for Christian-Jewish Learning.

Pope Benedict Leaves Behind Mixed Record of Relations With Jews