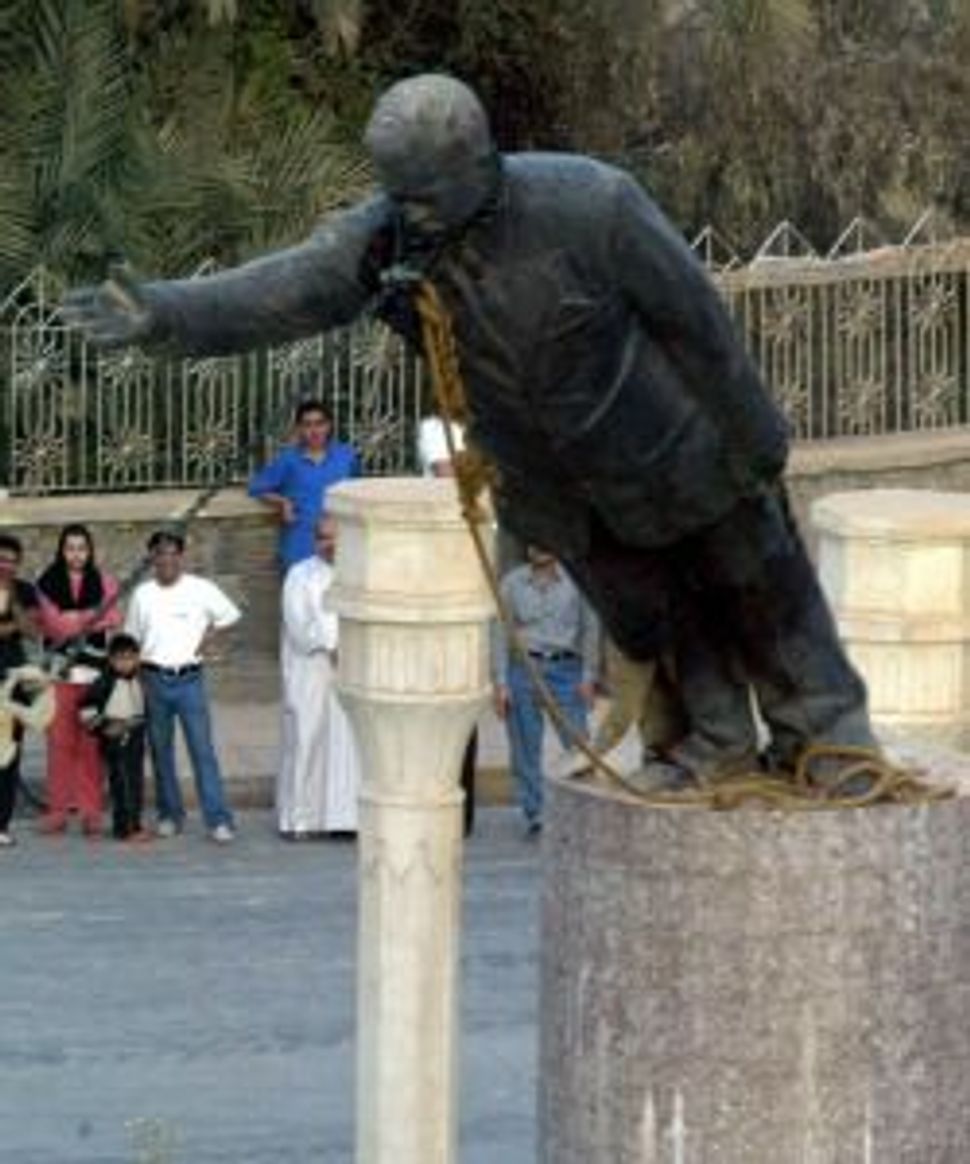 I doubt I’m the only one who noticed the irony of Defense Secretary Hagel affirming Syria’s likely use of chemical weapons, touching off a clamor among congressional hawks and the now familiar gaggle of neocons and liberal interventionists for American intervention in the civil war there, on the very day that President Obama was in Texas dedicating the George W. Bush presidential library. You couldn’t make this stuff up.

The irony is only compounded by the fact that the library officially opens to the public on May 1, 10 years to the day after Bush’s misbegotten “Mission Accomplished” speech on board the U.S.S. Abraham Lincoln, declaring that the war in Iraq had ended in victory. Of course, it wasn’t over, and by the time we pulled out eight years later, it was pretty clear that America hadn’t won. Saddam Hussein was gone but the country had descended into years of horrific, violent chaos, and it ain’t over. And for what? Saddam was never shown to have anything to do with 9/11 or Osama bin Laden. There were no weapons of mass destruction. Saddam was toothless.

But it was much worse than pointless. Removing Saddam eliminated neighboring Iran’s worst enemy, allowing the Islamic Republic to emerge as the regional superpower. Indeed, it would be fair to say that Iran was the biggest winner from the U.S. invasion of Iraq. But hey, don’t take my word for it. Listen to U.S. News owner Mortimer Zuckerman, one of the invasion’s most outspoken boosters. Here he is in October 2002, in one of his many get-Saddam editorials in the run-up to the invasion: “We are in a war against terrorism, and we must fight that war in a time and a place of our choosing. The war’s next phase, clearly, is Iraq.” Now, here he is four years later, in December 2006: “Question: What’s the most dangerous geopolitical development in the 21st century? Answer: Iran’s emergence as the Middle East regional superpower.” And here he is again in April 2007: “Ironically, Iran has been the great beneficiary of the war in Iraq.”

In other words, the Iraq invasion, which Zuckerman spent months demanding, resulted in “the most dangerous geopolitical development in the 21st century.” So what’s he up to now? Well, last week, even before the chemical weapons bombshell, he was calling the administration’s cautious approach “feeble” and urging some sort of stepped up involvement—either military engagement or full-scale arming of the rebels.

All this doesn’t make Zuckerman a bad man. But it does make him and his neoconservative allies extremely unreliable guides to the uncertain politics of the Middle East. The crowd that pushed us into Iraq created a disaster. And now they’re calling for firm action in Syria.

We know what they didn’t understand about Iraq. So what are they getting wrong about Syria?

First of all, as Assad himself pointed out in a rare interview, the opposition rebels are an unruly, unstable coalition that could well usher in the same sort of chaos we saw in Iraq. He calls it the collapse of the Syrian state. He’s not necessarily wrong. He also notes correctly that Al Qaeda and Salafi groups are a serious and growing force within the rebel camp. It’s altogether possible that the victors in the power struggle that will follow his fall will be a nightmare that will make the rest of the world long for the good old Assad days. Besides, he and his father have kept their border with Israel quiet for 40 years, since the Yom Kippur War. It’s been Israel’s most quiet border. Israel’s military leaders seem to miss him already, and he’s not even gone yet.

In effect, the choices are probably either a Syria that’s an ally of Iran—although unlike Iran, Syria is, we often forget, a secular state, which is in itself a rare blessing in the Middle East—or a Syria that’s yet another outpost of the Muslim Brotherhood, or worse, Al Qaeda.

They’re both rather unappealing. And what we should have learned from Iraq is that any outside attempt to direct the outcome will probably bring some as-yet-unimagined and incalculably worse result.

Alon Ben-David, defense correspondent for Israeli Channel 10 TV, argues that of the various forces jockeying to seize control in post-Assad Syria, the best outcome for Israel would be the Muslim Brotherhood. He says Turkey is working to assemble what amounts to a Sunni-Jewish axis to contain Shi’ite Iran and its Hezbollah proxies in Lebanon on one hand and the rising Salafi-al Qaeda threat in Syria. Turkey’s putative coalition includes Israel, Egypt under its Muslim Brotherhood leadership and Hamas, which he says has essentially broken with Iran and, under Egyptian-Turkish pressure, is ready for a de facto coexistence with Israel in the face of the greater Shi’ite threat.

So no, the Muslim Brotherhood — be it Turkish Prime Minister Recep Tayyip Erdogan’s AKP or Egyptian President Mohammed Morsi and Hamas — has not turned into “lovers of Zion” nor does it accept Israel’s existence in the Middle East. However, it has come to terms with that fact, seeing more immediate common enemies, such as Shiite Iranians, Salafists or Sunni jihadists. The Muslim Brotherhood’s rhetoric will forever sound acrimonious to Israeli ears, but given these two axes, Israel should know where its common interests lie.