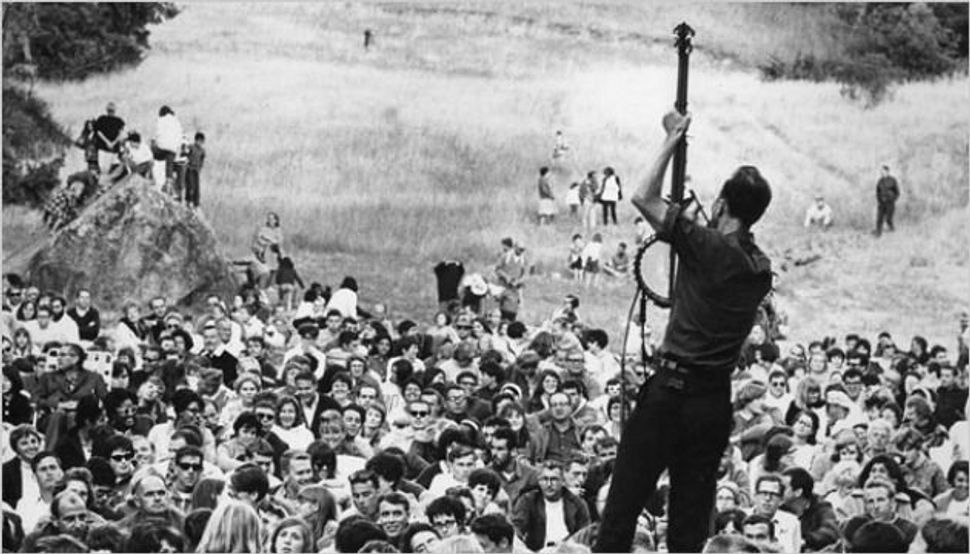 In the spring of 1998, Pete Seeger headlined a free concert in Central Park celebrating Israel’s 50th birthday, sponsored by the Cantors’ Assembly. The event prompted a critical press release from the Zionist Organization of America, protesting the Cantors’ Assembly’s giving a platform to a harsh critic of Israel.

The evidence for the prosecution was an ad to which Pete had added his name in 1982 or ’83, protesting Israeli actions in Lebanon. They could have come up with worse stuff if they’d known where to look (more on that later). But there was a flip side to Seeger’s record, and it was a lot longer and deeper. His 1950 recording with The Weavers of the Israeli folk tune “Tzena, Tzena” was the first and still the only Israeli song ever to hit the American pop charts, coming in at No. 2. For years afterward, he made a habit of performing and teaching at least one Israeli song at every one of his sing-along concerts. He may have done more than anyone besides Leon Uris to teach Americans to love Israel in its early years.

Well, I decided to write about it in my weekly column, which was self-syndicated in a few dozen local Jewish weeklies. I got Seeger’s home number from the late folk patriarch Art D’Lugoff, called him up, introduced myself and asked him about it. It was a delightful conversation. I even got to put my 4-year-old daughter Emma on the phone—she knew his music well, as I had at her age, and was thrilled to speak with him. Pete was gushing about her when I got back on the phone. He talked briefly about what an inspiration Israel was to American progressives during the cold war years of the 1950s. He explained that “Tzena, Tzena” was the B-side of their “Goodnight, Irene,” which was No. 1 for 17 weeks in 1950, and the deejays discovered that when they turned the record over they had another hit on their hands.

My column went on to poke fun at ZOA president Mort Klein’s habit of publicly attacking “critics” of Israel—I noted the cases of Martin Indyk and Aaron David Miller—whose far longer records of support and love for Israel consistently went unmentioned. The ZOA was not amused.

The Philadelphia Jewish Exponent, Klein’s hometown Jewish weekly, dropped my column, attacked me in a long editorial and ran five pages of letters impugning my integrity. I also got a letter from a lawyer threatening me with a libel lawsuit, which never materialized. (I should mention that Mort himself called me during the brouhaha to apologize for his friends’ overreaction. He said he’d tried unsuccessfully to tone it down. We’ve remained friends.)

I don’t remember how old I was when I learned that Seeger wasn’t Jewish, but I remember it came as a shock. I was raised on his music. Taken by my parents to Young People’s folk concerts in Greenwich Village before I was old enough to walk. Knew all the words to the Almanac Singers’ “Talking Union” album by the time I was 10. Sang his songs around the campfire at Habonim camp. Got my first guitar for my bar mitzvah. Went alone on a train to Manhattan with my big sister Maggie in June 1963 to attend his Farewell Concert at Carnegie Hall (which became his “We Shall Overcome” album). The whole family had attended the Weavers’ Reunion concert earlier that spring. I was under the impression that a “farewell” concert meant he’d never sing again. Turned out he was just leaving on an overseas tour.

We went backstage for an autograph afterwards, as was our habit. We couldn’t get through the crowd of well-wishers, so we crawled between the grownups’ legs. When we got to him, Maggie shouted up, “Mr. Seeger, will you marry me?” He gave a big smile and said, “I’ve already got a wife and a banjo.” And we got our autographs.

I do remember my shock in the fall of 1968 when I went to his concert at Lisner Auditorium in Washington, D.C., and for the first time in my experience he didn’t sing a Hebrew song. He did sing “Hey Zhankoye,” a Yiddish tune celebrating the Soviet-era Jewish farm colonies in the Crimea.

It felt like a personal betrayal. These were the months when the New Left was massively turning against Israel and young Jewish leftists were feeling abandoned and alone. I went backstage and asked, probably in a bristling, angry tone, why he hadn’t sung an Israeli song. He gave some dismissive answer about singing songs from many countries. I don’t know when he started singing Hebrew songs again, because I didn’t attend another Seeger concert for more than a decade (most of which I spent in Canada and Israel). By the time I started going to his “father-son” Thanksgiving concerts with Arlo Guthrie in the 1980s, Hebrew was a regular feature again.

My kids’ memories of Pete won’t be the same as mine. They still sing his songs around the Habonim campfire, but he’s now part of the American mainstream, no longer a secret treasure. They didn’t hear him at Greenwich Village clubs but in a packed concert at Madison Square Garden.

And yet, there are still secrets to be discovered. Not long ago my teenage son Coby, who’s teaching himself the banjo, was combing iTunes for a version of “Solidarity Forever” he could learn. I played him the classic Almanac Singers version. When I explained who they were, his eyes lit up. “You mean,” he said, “Pete and Woody had their own band together? Awesome!”