How Bibi Might Win: Link to Bennett’s Settler Party 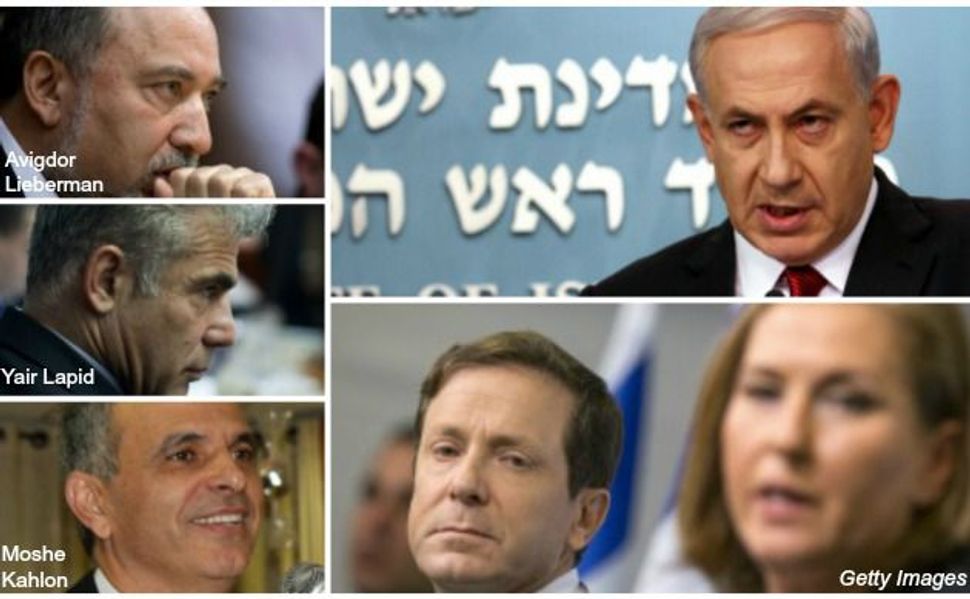 The ink hasn’t even dried on the merger between Tzipi Livni and Labor’s Yitzhak Herzog that vaults them to first place in the polls, but the Likud’s reply is already in the works. According to a new poll released today by the Midgam organization, a merger between the Likud and Naftali Bennett’s settler-backed Jewish Home party would win them 33 seats in the 120-member Knesset.

That’s fewer than the 38 seats they’ll win if they run separately, according to current polls. But it also might be Bibi’s one path to a second term, giving him a prohibitive lead over the 24 seats predicted for the merged Labor-Livni List, or LLL, as I’m calling it. (LLL is also the yodeling mock-laugh perfected by the late David Twersky.)

On the other hand, Jewish Home might not end up offering the dowry that’s now on the table. The leader of its far-right faction, housing minister Uri Ariel, whose semi-Kahanist Tekuma party holds four of Jewish Home’s 12 current seats, is threatening to bolt. Running alone, he just might fall short of Knesset membership and disappear after the election.

But Ariel might have a new partner waiting in the wings: Eli Yishai, former chairman of Shas. Since being demoted to No. 2 after the 2012 return of founding party chair Arye Deri, Yishai has become increasingly alienated. Deri is firmly left-of-center both on the Palestinian issue — he favors a two-state solution — and on economics, where he leans social-democratic. Yishai is on the far right on both issues. Party sources are quoted (in the left-leaning Haaretz, the center-right Maariv and the right-wing Yisrael Hayom, among others) as saying Yishai is on the verge of leaving Shas and either setting up a competing Sephardic-Haredi party or joining forces with Uri Ariel.

A Yishai-led Haredi party would damage both Shas and Likud, though the damage might be slight. A joint Yishai-Ariel list, however, could badly hurt Likud, Shas and Jewish Home alike.

Answers are expected next Monday, when last-ditch reconciliation meetings are scheduled for both rifts — Bennett-Ariel and Deri-Yishai.

There’s turbulence as well at the center of the map, where three popular figures — Avigdor Lieberman, Yair Lapid and Moshe Kahlon — are watching their popularity slowly fade.

The three have been maneuvering for weeks to break out and claim leadership of the moderate middle. All three had been holding steady at 10 to 12 seats in the next election, and all three have slipped to single digits in the latest polls.

Together they’re expected to hold the balance of power after the March balloting. Whichever major candidate gets the most votes, whether Netanyahu or Herzog, he’ll need these three behind him to form a coalition with a Knesset majority. There’s some speculation that the three will join together to form a center bloc to challenge both Netanyahu and Herzog, but all three are denying it. Each insists that he will defy the odds and become the next prime minister.

Lieberman is the onetime Netanyahu chief of staff who broke with his boss in 1997 and soon after formed the right-wing Russian immigrant party Yisrael Beiteinu. He led his party into a joint list with Bibi in 2009 and became foreign minister, but broke up the partnership last July. He’s best known for his crudely rightist views on civil liberties and minority (meaning Arab-Israeli) rights, but over the past year he’s moderated his image and gained new respect in Western capitals.

Lapid is the former TV host who formed the liberal-leaning Yesh Atid party in 2012, focused mainly on middle class economic appeal. He emerged as the Cinderella of the 2013 elections, leading the second-largest party in Knesset with 19 seats. He proceeded to make every possible political mistake, starting with accepting the post of finance minister, traditionally a one-way ticket to political oblivion. In the last few weeks he’s been floundering, losing to Labor in the bidding for Tzipi Livni, and now trying to tout his “centrism” and discredit Labor’s “leftism,” even though most of his outgoing ticket is well to Livni’s left.

Kahlon is a onetime rising star in the Likud, best known for lowering cellphone prices while serving as minister of communication. He quit politics in 2012, then announced his return last spring at the head of a new, unnamed political party. Today he announced his party’s name, Kulanu (“All of us”). Next week he’s expected to roll out a platform and a list of allies. Names that have surfaced in the press as likely members of his list include Haifa mayor (and longtime friend of the Forward) Yona Yahav, Haredi feminist (and daughter of Ovadia Yosef) Adina Bar-Shalom, retired general Yoav Galant and businessman Rami Levy.

Last week Kahlon signed a vote-sharing agreement with Lieberman. That’s a deal under which two parties agree in advance to pool any “spare” votes they get (the fraction that doesn’t quite add up to another Knesset seat) so that one of the two will get that extra seat. That leaves Lapid as the only major party outside the Haredi and Arab blocs who doesn’t have a spare-vote partner.

How Bibi Might Win: Link to Bennett’s Settler Party