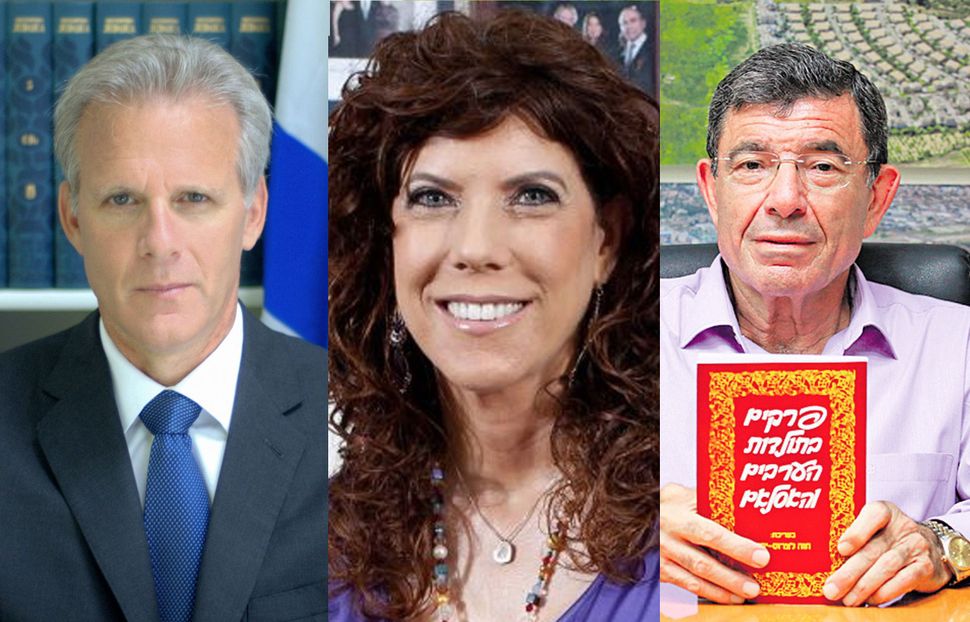 We’ve all been talking about Michael Oren’s audacious new book “Ally” and his . But Michael Oren is hardly the only Israeli citizen making enemies out of the President of the United States.

Take Judy Nir Moses, the wife of Israeli Minister of Interior Silvan Shalom. She’s a media personality, part of a weekly talk show, and has a Twitter following of 75 thousand. And last week, she tweeted the following: 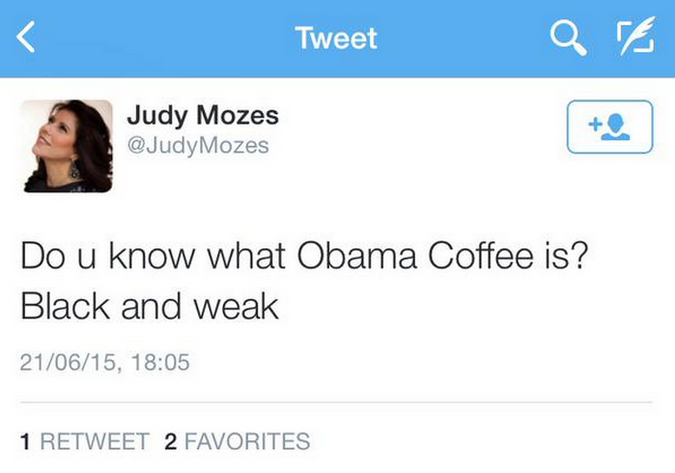 Not only was her joke racist, but in what country is it acceptable for the wife of an elected official to make fun of the President of the United States?

Sure, she quickly deleted her tweet, and apologized for tweeting an insensitive joke that she heard — but, really? What if Michelle Obama tweeted jokes about Bibi?

What makes this even more grievous is that her husband is in charge of “strategic dialogue with the United States.”

You might be tempted to chalk this up to eccentric personalities — just a couple of people who are irresponsible with the facts or with social media. And as an Israeli, I’d like to avert my eyes and attribute these interactions to a few black sheep. But this isn’t just about Michael Oren or Judy Nir Moses. It’s part of a bigger problem plaguing Israeli society: an unfortunate pattern of xenophobia. We like to adopt an “everyone is against us” mentality, which leaves us willfully ignorant of the realities of people and countries around us. Which, in turn, makes it seem okay to make racist jokes about Obama.

Not convinced? Consider the following incident in the city of Nes Tziona, which is more telling than either of the incidents mentioned above.

This week, many Israelis across the country graduated from high school. Yossi Shevo, Nes Tziona’s mayor, decided to give his city’s graduates a special gift: a book about the history of Arabs and Islam, edited by Hava Lazarus-Yafeh, an Israel Prize winner. To be clear, Shevo is a Likud member. But he wanted to give this book to enhance the students’ understanding of the countries and people that surrounded them. He himself was born in Cairo and he told Yediot Ahronot that with the rise of ISIS and Islamic fundamentalism, he wanted to give this book “to help create a common language and tolerance between us and Arabs.”

Yet both students and parents reacted with anger. Why, they wondered, didn’t the mayor give out a book about the history of Jews and the foundation of the Jewish state? They wanted to send all the books back, in protest. The gift elicited such a strong reaction from people because somehow, for these parents whose children are about to join the IDF, getting a book about the culture and religion of the countries that surround them and the people with whom they cohabitate is the most terrible thing.

That’s the bottom line. When faced between choosing to understand and empathize with the countries and people outside Israel — be it our number one ally, or those who literally live a few miles away — Israelis choose time and time again their own fear of the outside.

As an Israeli who now lives “outside,” I have to wonder if it isn’t time we let go of that fear.