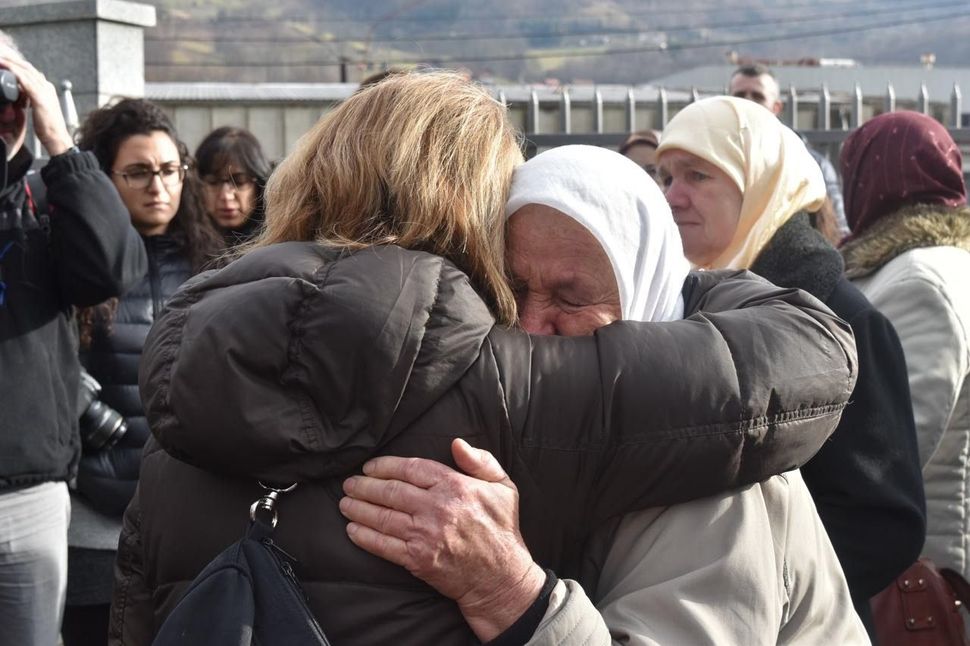 Image by Courtesy of Sheryl Olitzky

Never before has it been so urgent for American Jews and Muslims to unite as it is now that Donald Trump has won the presidency. Ever since November 9, Jews and Muslims have been experiencing an uptick in targeted hate crimes, with the Southern Poverty Law Center reporting hundreds of incidents of intimidation and harassment in the first five days alone. As minorities, we feel more vulnerable with each report of an act against one of our people, and more anxious with each statement by political “leaders” threatening our rights.

During the past few weeks, Muslim and Jewish women — like the two of us — have had to manage fears from our own children. Muslim children are afraid of deportation, Jewish children are afraid Nazis are coming back, and both faith groups have seen our children subjected to increased bullying.

With these events unfolding, we have never been more grateful to have at our disposal the Sisterhood of Salaam-Shalom, a group created six years ago in an effort to build bridges between local Jewish and Muslim women in New Jersey. What started as a handful of women wanting to better understand their neighbors has grown to 50 chapters, comprising thousands of members, across the United States. Since the election, we’ve received hundreds of requests from Muslim and Jewish women to start new chapters, proving that there is both a need and a willingness within our communities to work together. Our Sisterhood has become a safe haven for women to dialogue about their fears, to listen, to cry together, to seek advice and to find hope.

The Sisterhood isn’t just a “ladies club.” We’re a peace movement composed of women of faith who believe God has given us the ability to be empathetic and to strive for relationship building over conflict. Our focus isn’t on policy; it’s on people — specifically, on our children and grandchildren. We recognize on a cellular level that it’s worth doing whatever we must to protect those precious lives.

One reason that the Sisterhood is now poised to become a vital player in a post-Trump Muslim-Jewish alliance is that our work began in the pre-Trump era. The bridges we have been building are not new — they’re years in the making. The members of the Sisterhood have already proved to one another that by creating trust and respect, and by cultivating an environment of learning, even when there’s no immediate crisis pushing us to do so, we can develop deep relationships. And those relationships will be there for us all when we really need them, like right now.

Bridge building is a worthwhile endeavor in and of itself, and when we started the Sisterhood we could not foresee the full impact of our efforts on the current environment. But the recent election has made clear to us just how valuable the past work of the Sisterhood has been, and how it has set us up for the even more important work in the months to come.

Another reason that the Sisterhood has been successful is that we attempt to go beyond the cursory “Abrahamic family” conversations that are so typical of interfaith efforts. Instead of convening a one-time panel discussion between a rabbi and an imam or just getting together to talk about our commonalities over a plate of shared hummus, the Sisterhood provides a space for women to be vulnerable and to learn about one another’s real challenges and concerns.

As part of this learning, we have to listen to each other’s narratives in a safe and controlled environment. We do not have to agree, but we do have to consider other ways of understanding things. Doing this means hearing things that may not be easy to hear.

We do this by practicing compassionate listening.

Last year, during the annual Sisterhood conference, Rabbi Amy Eilberg led a group of 300 Muslim and Jewish women in an exercise that allowed each of us to share our own feelings and experiences around the Israeli-Palestinian conflict. We each chose a partner from the other faith tradition and took turns — one talking and the other listening intently — and then we switched.

Women sat looking into each other’s faces, leaning in to hear. The room was solemn, voices low and intent. It was a sacred moment when fears of being yelled at, ignored or ridiculed dissolved before our eyes, and the humanity of each of us was recognized simply through the act of listening and acknowledging one another’s stories. Afterward, we felt empowered. To be honest with our deepest feelings and have someone else truly hear us is the one of the most important acts of humanity we can experience. And yet, it is so rare.

This year, the annual conference will take place December 4, at Drew University in Madison, New Jersey. It will draw a record number of women from across the United States, and even from Europe and Israel, to learn from experts on interfaith engagement and waging peace. There will be a session led by Rabbi Justus Baird, dean of Auburn Seminary, to teach how to have meaningful conversations about difficult subjects. The keynote presenter, Robi Damelin from the Parents Circle, a bereavement group for Israelis and Palestinians, will guide us on a silent walk as we focus on what it’s like to walk in another’s shoes.

We believe that by giving our sisters these tools, we will continue to forge deeper, stronger relationships that are built on trust and respect for our shared humanity. The Sisterhood of Salaam-Shalom isn’t about finding points where we can all agree while ignoring the rest. It’s about managing the reality we live with as Muslims and Jews, and learning how to live in that reality together. This united front is only going to become more vital over the next four years.

Sheryl Olitzky is the executive director and co-founder of the Sisterhood of Salaam-Shalom, and a leader and speaker in the field of interfaith relations. Follow her on Twitter, @sosspeace

Amanda Quraishi is a digital media professional and interfaith activist based in Austin, Texas. Follow her on Twitter, @ImTheQ