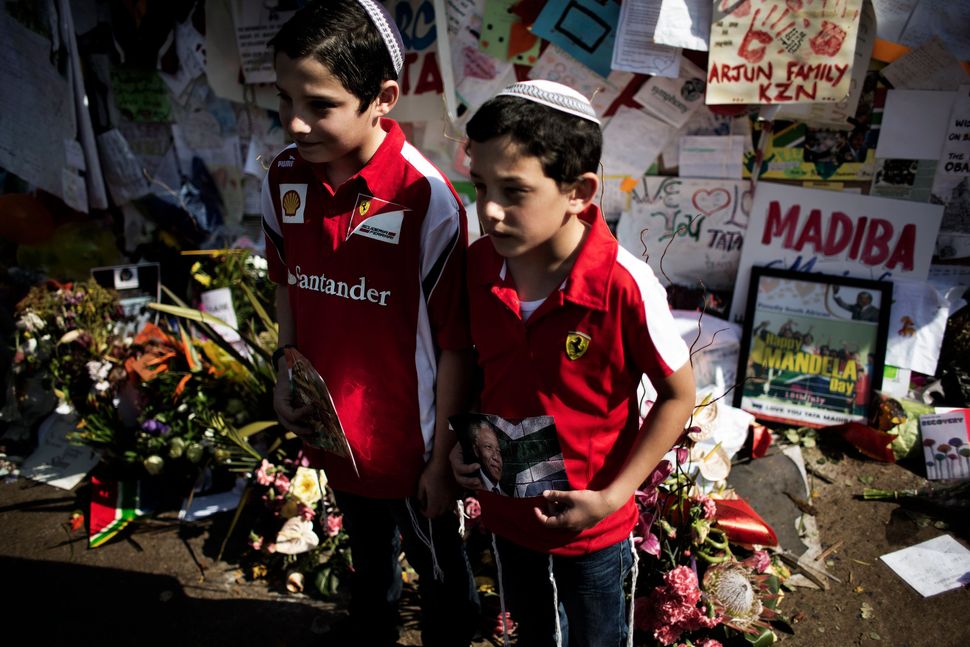 The mainstreaming of anti-Semitism during the Donald Trump election campaign has shocked many American Jews, and it is obviously cause for concern. But it can’t be separated from white nationalists’ broader onslaught against Muslims, Latinos and people of color in general. In fact, if we Jews want to act on the basis of our shared ethics and history, we should proudly situate ourselves outside the boundaries of hateful nationalist “whiteness,” standing shoulder to shoulder with the persecuted. If neo-Nazis either embrace or ignore us, we’re probably not being very good Jews.

This much I learned growing up in apartheid South Africa, a regime run by notorious anti-Semites who fought for Nazi Germany during World War II.

As my generation read “The Diary of Anne Frank” and learned about the Holocaust inside Jewish institutions in a society run by avowed Hitler acolytes, we could always see that their victims in South Africa were the black majority, whose daily violent subjugation enabled a system of white privilege of which we were beneficiaries.

But by the time I reached high school, the anti-Semites’ loathing toward Jews was counterbalanced by a grudging need for our support in the defense of white minority rule, particularly in cultivating military ties with Israel.

So, the role in the Holocaust story that applied to us was that of the bystanders who — if they failed to resist — enabled the Nazis’ crimes. I chose to resist, although there were no channels for it in a mid-1970s segregated high school, save for spirited playground debate in which I was told that I was “a waste of white skin” and that I should “go back to Israel.”

That’s exactly what I planned to do before I found a pathway for meaningful involvement in fighting apartheid. The leftist Zionist movement Habonim taught me about structural racism and capitalism, and inculcated in me a short-lived vision of beaming utopian-socialist light unto the nations from a hilltop kibbutz in the Galilee.

But I was troubled by Israel’s alliance with the apartheid regime, which reinforced the already self-preserving quietism of South Africa’s Jewish leadership. When Israel’s government feted the unrepentant Nazi and wartime German intelligence operative Prime Minister B.J. Vorster at Yad Vashem, it was too much for the young idealists of Habonim. But the local Jewish establishment quickly shushed our protests; Zionist priorities and Jewish access to the circle of white privilege demanded quiescence with apartheid.

At university, amid the burgeoning non-racial anti-apartheid student movement, another pathway opened for me: There, I learned that the movement led by Nelson Mandela had included thousands of white progressives since the 1950s. And despite the movement’s check-your-tribalism-at-the-door philosophy, I felt immense pride in the fact that Jews were vastly overrepresented in its ranks.

I learned about Denis Goldberg, convicted with Mandela in 1964 but jailed separately in a whites-only prison to comply with the apartheid laws they had fought; of Ray Alexander, the Yiddish-speaking legend who began organizing black trade unions as a teenager; of Mandela’s comrades Joe Slovo, Rusty Bernstein, Harold Wolpe, and the brilliant writer Ruth First, murdered by the regime, and so many, many others.

But South Africa’s Jewish establishment did not share my admiration for these Jews who had risked everything to fight for justice under the leadership of their black compatriots. Those of us who became active in the anti-apartheid struggle represented a reputational risk to a Jewish establishment that prioritized its loyalty to the institutions of South African “whiteness” at the expense of its moral obligations.

There’s a lesson there for Jewish America in the Trump era.

As in South Africa, Jews coming to the United States from Eastern Europe were not initially welcomed into the country’s privileged circle of whiteness. When these Jews eventually were allowed into the corridors of American power, it didn’t change the reality of exclusion for most people of color — an exclusion likely to become more vicious under a Trump administration. White nationalist anti-Semitism should be a wake-up call, alerting us to the pervasive injustice of racism in America, and to the moral obligations that it imposes on Jews. To seek a separate accommodation with bigotry, as South Africa’s Jewish establishment did, is to abandon Jewish ethics.

That’s why the Anti-Defamation League’s Jonathan Greenblatt provided such an inspiring example when he declared, “I pledge to you because I am committed to the fight against anti-Semitism that if one day Muslim Americans are forced to register their identities, that is the day that this proud Jew will register as Muslim.” Shkoyach — may your strength be directed forward! Greenblatt’s statement recognizes, as we did in South Africa, that even when we are not the primary target of the bigots, we are no less obliged to stand with those who are. Yes, that will earn us the hatred of the white nationalists — but their animus is actually a sign that we’re doing the right thing.

To borrow a conceit from the title of a Nathan Englander short story that perfectly captures the mindset of many American Jewish baby boomers: What do we talk about when we talk about Anne Frank? Well, for the most part, in Trump’s America — as in apartheid South Africa — Anne Frank is not Jewish. Here, she’s a Catholic Latina without papers; a Muslim woman in a hijab; a transgender evangelical kid in a rust-belt high school. And just as the characters in Englander’s story wonder which of their neighbors would protect them from the Nazis, so do the Anne Franks of the Trump era have every right to demand our active solidarity.

If we allow their torment to go unchallenged because we are not primary targets, we have learned nothing from our own history and ethics — or from the Torah prophets who warned that no amount of prayer and ritual will spare Jews from God’s wrath if they fail to pursue justice for all.

Tony Karon previously served as the online editorial director at Al Jazeera America and as a senior editor at Time magazine. He lives in Brooklyn and teaches at The New School’s Graduate Program in International Affairs. Follow him on Twitter, @TonyKaron