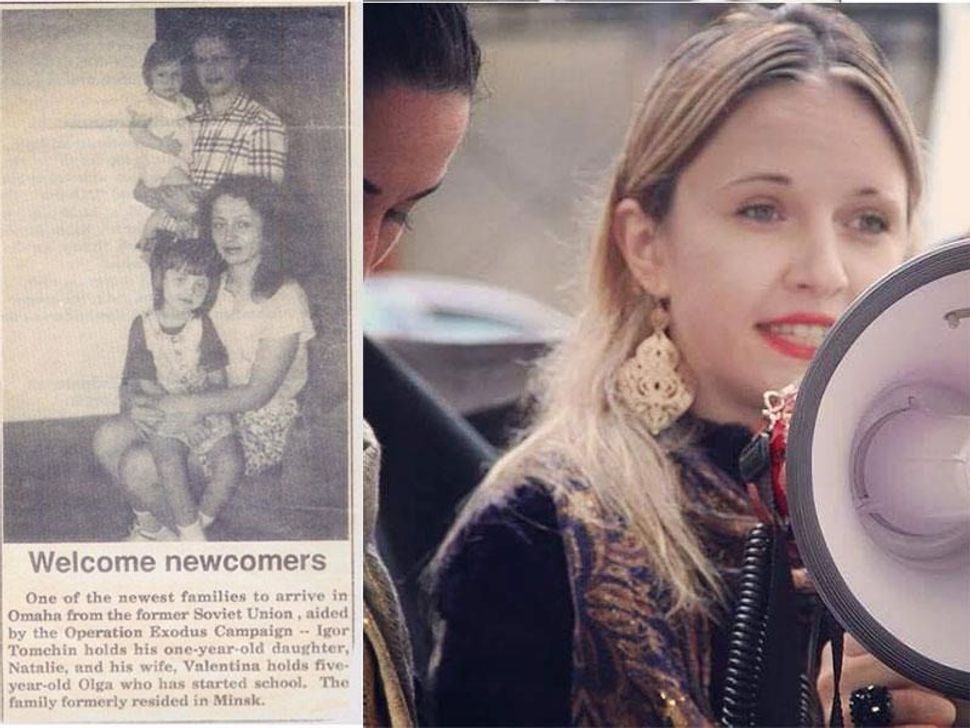 Image by Courtesy of Olga Tomchin

Emblazoned in handwritten Cyrillic on Olga Tomchin’s back is a word that has come to embody so much more than its literal definition. Pozor, Russian for “disgrace” (or shanda in Yiddish) has become a rallying cry for a movement of Soviet-born millennials defying their families’ ideologies and banding together in opposition to Donald Trump. Like so much else, the pozor meme emerged from the Internet, but has now taken on a life of its own, permeating IRL conversations among my immigrant kin and shining a spotlight on the ideological split devastating so many of our families. And in Tomchin’s case, the tattoo serves as a daily reminder of the disobedience, civil or otherwise, that has defined her life.

Born in Minsk, Belarus in 1988 to a half-Jewish father and non-Jewish mother, Tomchin, 28, grew up watching her family bear the brunt of anti-Semitism. The Soviets barred her father from attending certain universities and forced him into military conscription because he was a Jew. As ethnic tensions escalated in the final days of the crumbling Soviet regime, Olga was sent to her maternal grandparents’ village out of a fear of pogroms. In 1993, her family was resettled with refugee status in Omaha, Nebraska as part of the United Jewish Appeal’s Operation Exodus.

The refugee experience inspired Tomchin’s decision to pursue refugee and immigration work. After finishing Berkeley Law with a focus on trans and queer immigration, she landed her first job as a Soros Justice Fellow at the Transgender Law Center, and had long been involved in activism when a realization struck:

“I would attend conferences with activists and would never meet other Soviet immigrants, despite the fact that there are so many of us,” recalls Tomchin. “When the election happened and people were organizing, I thought, ‘I’ve been looking for my community for years. I’m not finding it, so I might as well start it myself.’”

Two days after the presidential election, Tomchin launched the Anti-Trump Soviet Immigrants Facebook group When I first joined the group a couple of months ago, it had less than 200 members and primarily served as online group therapy. Members would commiserate over the more traumatizing aspects of growing up in an immigrant household, including coping with racist relatives. But the group grew quickly, amassing more than 2600 members, and evolving into a grassroots platform for first-and-second generation Americans to exchange ideas and mobilize.

With the creation of her group, Tomchin filled an immense need, carving out a space for the formerly ostracized members of our community. And it’s no surprise that progressives among us feel ostracized — after all, anyone reading media portrayals of Soviet immigrants may be under the impression that we all march to the same right-wing, Zionist, pro-Trump beat. Having fled the USSR, the logic goes, immigrants now shun any and all things vaguely socialist. As I wrote in the Times of Israel back in November:

One trend piece after another after another made clear what many of us growing up in the community had always known — that immigrants from the former Soviet Union tend to lean to the right. And yet, what each of those articles consistently failed to do, was explain that not only are Russian-speaking immigrants not a monolith, but there are a great many factions within the community that are effectively tearing it apart.

Now, three months after Trump’s election, not only is my community still reeling from the force of this seismic divide, but Tomchin and others like her are battling back, debunking the notion that our politics are unified and in lockstep with the Trump-Putin administration.

The group’s proudest accomplishment so far has been the creation and promulgation of the “Soviet Jewish Refugee Solidarity Letter,” written in opposition to Trump’s recent refugee ban. As of February 5th, the letter attracted more than 1,100 signers, including the likes of Masha Gessen, Gary Shteyngart, and Regina Spektor. It reads:

“On the basis of our Jewish values and our own experiences as Soviet Jewish refugees, we stand in solidarity with refugees fleeing Syria, Central America, and oppression and death throughout the world…Many of us are children and grandchildren of Holocaust survivors, and we are all too aware how xenophobia prevented the United States from mounting an adequate moral response before and during World War II to Jewish refugees fleeing genocide.”

In addition to advocating for the protection of refugees, the letter had a subsequent goal. “So much media coverage of Soviet Jews during the election had involved interviewing conservative babushki and dedushki and saying ‘they speak for the community,’” Tomchin frets. “This letter is to say they do not speak for us…As Jewish refugees, we have moral claim on this issue and will not let people slander our community by hijacking our identities.”

Sure enough, not all responses have been positive. One of the letter’s co-writers, Vlad Khaykin, a Soviet-Jewish refugee and activist who works for the Central Pacific Branch of the Anti-Defamation League (ADL), received an anti-Semitic threat just days after it was published: “I don’t care what we have done. No apologies. And if your people don’t stop pushing. 6 [sic] million will seem like a walk in the park,” read the email, signed “Adolf Himmler.”

“It’s par for the course when you work at ADL,” acknowledges Vlad, for whom anti-Semitic slurs are regrettably familiar — even from members of his own community. He recalls one instance of being called “Judenrat” and “kapo” by Soviet Jews when explaining ADL’s position on refugees. “We can’t discount the power of internalized racism, anti-Semitism, xenophobia, nativism, homophobia. That’s a real phenomenon. To a large degree that’s happened within the community. We fled authoritarianism and xenophobia but weren’t able to leave it behind. A lot of time, you see that same suspicion of the Other.”

Fortunately, with the letter having appeared in Jewish media and at least one (albeit right-wing) Russian newspaper, Tomchin, Khaykin, and the rest of the Soviet activist cohort have something to show for our efforts. But restoring relations within the increasingly polarized Soviet immigrant community will be an uphill battle. Many families have been torn apart in this political climate, mine included.

But perhaps all is not lost. After all, all happy families are alike and stay out of politics, right?

“A lot of us were taught by our families not to protest, that it’s futile,” says Tomchin. “This is the opposite. We’re socializing our people to understand how to be political actors while embodying our identities and histories. We’re saying it’s possible to do that, and to lead by example.”

Samantha Shokin is a freelance writer and the child of Soviet Jewish refugees from Ukraine and Lithuania. She was born in New York and is currently based in the Bay Area. Visit her at www.samshokin.com.