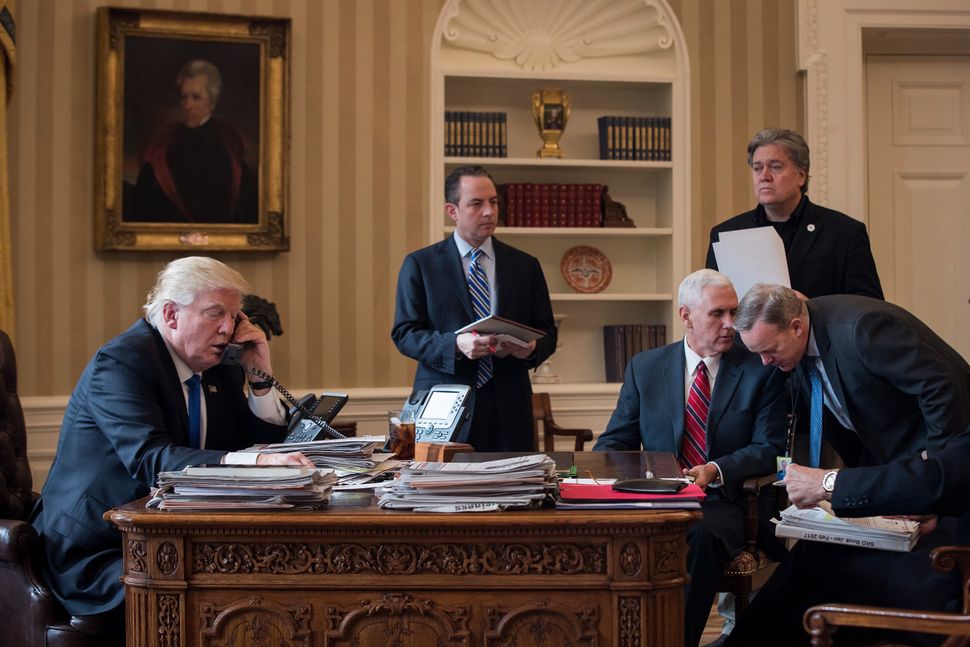 Earlier this week, Jews throughout the world gathered around dining room tables with family and friends to celebrate Passover. At the Seder meal, participants are made to feel they were slaves in Egypt by recalling one of humanity’s fundamental stories about freedom from oppression. The ancient Exodus story serves to remind us of the ongoing responsibility, passed down through generations, to take a stand against injustice.

How ironic then, that on the very day that the Jewish community was gathering to retell a 3,000-year-old story of oppression at Seders, White House Press Secretary Sean Spicer negated an 80-year-old history of oppression. At a press briefing on the eve of Passover, he contended that Hitler, unlike Syria’s Assad, never used chemical weapons against his own people, failing to recognize that the Nazis deployed a chemical weapon – Zyklon B gas – to carry out the systematic slaughter of millions in gas chambers and that the victims included 160,000-180,000 German Jews. Adding insult to injury, Spicer tried walking back his comments the next day with a hackneyed acknowledgement that Hitler did target victims with chemical weapons at “Holocaust centers.”

I served as President Obama’s liaison to the American Jewish community for close to three years and experienced firsthand the significance attached to every word emanating from the White House. In the case of Trump’s White House, Spicer’s comments were just the latest in a succession of affronts that shine a spotlight on the Trump White House’s repeated failure to take an unambiguous stand against anti-Semitism and its tone-deafness to the growing concerns of American Jews during increasingly intolerant times.

First was the appointment of Steve Bannon, who became Counselor to the President despite his role as the pater familias of the alt-Right through his leadership of Breitbart News, which the Anti-Defamation League (ADL) has called the “leading source for the extreme views of a vocal minority who peddle bigotry and promote hate.” The alt-Right minions stirred up by Bannon and Breitbart are unabashed in fueling a cesspool of online anti-Semitic attacks – just ask any number of Jewish journalists about the online comments or Tweets they have received. Until late February, Trump declined repeated invitations to condemn such attacks.

Second was the failure to mention the Jewish victims of the Holocaust in Trump’s January 27 International Holocaust Remembrance Day Statement. When I worked at the White House, I drafted these statements, and I had to ensure that they avoided landmines like, say, failing to mention that 6 million Jews were murdered, in a statement about Holocaust remembrance. Even more unbelievable than this omission — which could have been chalked up to a White House that didn’t have its act together — was the White House’s doubling down to defend it, arguing that it was unnecessary. Unnecessary? Hitler sought to exterminate European Jewry, and the statement should have listed Jews along with the Holocaust’s other victims, just as President Obama’s statements did. Ultimately, the omission of Jewish victims from the statement was a shocking wink and nod to those on the “alt-Right” who either pay lip service to, or fail to condemn, Holocaust denial.

Third was the inadequacy of President Trump’s response to a surge in anti-Semitism, including vandalism of Jewish cemeteries and other community spaces. His stubborn unwillingness to condemn it was on full display at Trump’s rambling February 16 press conference, when he upbraided a reporter from a haredi publication who attempted to ask a reasonable question about the uptick in anti-Semitism. Before the reporter could even finish, Trump ordered him to “sit down,” accusing him of asking an unfair question and then boasted: “So here’s the story folks. No. 1, I am the least anti-Semitic person that you’ve ever seen in your entire life.”

Really? Then why did it take the President so long to address the ugly rise in anti-Semitism. It wasn’t until February 21 that he read a prepared statement condemning anti-Semitic threats to the Jewish community following a tour of the Museum of African-American History. And why did Trump cryptically insinuate something else a few days later when he said, at a White House meeting of state attorneys general, that the vandalism and threats against Jewish community institutions might not be anti-Semitism, “but the reverse”? The head of his Office of Public Liaison then supported this false flag with a Tweet suggesting that some of the threats might in fact be coming from Democrats.

That brings us to this week’s conflagration, which Spicer ignited as Passover began. With his fumbled effort to walk back these comments by referring to “Holocaust centers,” Spicer only dug himself into a deeper hole. The backlash was overwhelming everywhere except at the White House, where President Trump has remained silent and taken no remedial steps, despite being called upon repeatedly to relieve his ignorant-at-best press secretary of his duties as the president’s chief spokesperson. At the very least, Trump should require Spicer take a day off so that he can take a short walk to the U.S. Holocaust Memorial Museum for a long visit.

Spicer then sought to rehabilitate himself in the Jewish community by calling Sheldon Adelson, the partisan Republican billionaire and casino magnate who underwrites the Republican Jewish Coalition and an array of right-wing causes, donated millions to support Trump’s election, and is far to the right of the majority of American Jews. Spicer did not reach out to the ADL or any of the major Jewish organizations that play a leadership role in combating Anti-Semitism in America. What should have been a genuine gesture of contrition became a transparent act of tokenism that underscored just how out of touch this White House is with the Jewish community.

Trump’s White House may hold the record for the most high-profile affronts to the Jewish community in the first 100 days. I cannot help but compare this Passover to those celebrated at the White House during the Obama years. During each of his eight years in office, President Obama issued a statement that captured the spirit, meaning and relevance of the Passover story. He and First Lady Michelle Obama, joined by Jewish and non-Jewish staffers, recalled the Exodus story at eight White House Seders. This year, Passover at the White House was dominated by Spicer’s comments, along with a “happy Passover” Tweet by President Trump and a White House Seder that no one from the First Family bothered to attend.

The words and actions emanating from the Trump White House demonstrate that the President and his staff, on matters of central concern to the Jewish community, are the ones wandering in the desert 3,000 years after the Exodus.

Mathew S. Nosanchuk served as Associate Director in the White House Office of Public Engagement, Director of Outreach on the National Security Council and as the President’s liaison to the American Jewish Community from 2013-2016.