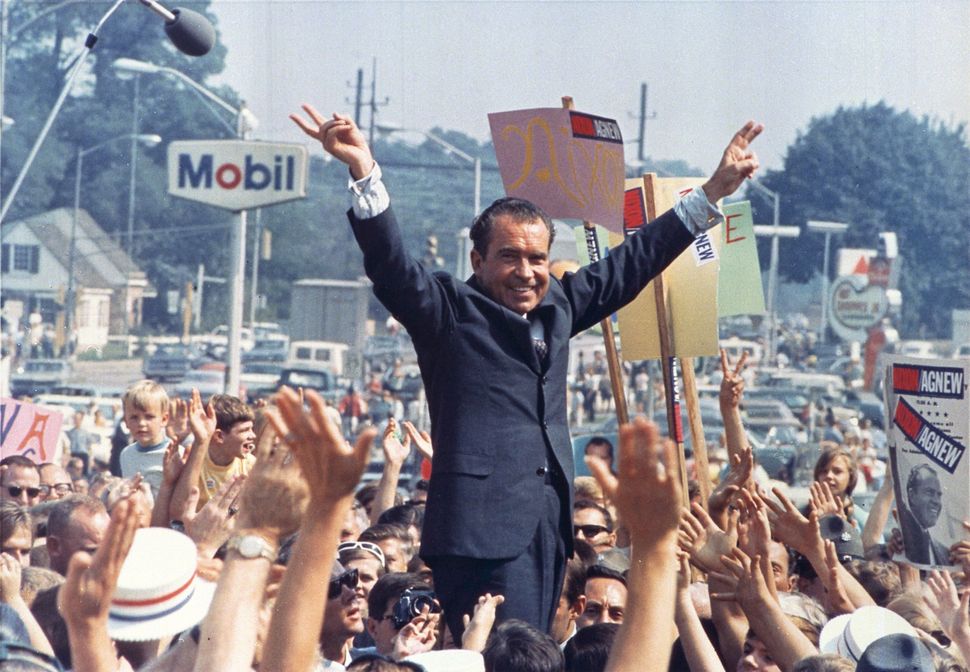 In this season of final exams, let’s take a brief test on American political history. It consists of a scenario, a question, and four possible answers. If you feel a wave of déjà vu as you proceed, don’t panic. It’s perfectly appropriate.

Here we go. You are the president of the United States. You or aides close to you are being investigated by a federal law-enforcement agency. So you fire the top gumshoe on the case.

Meanwhile, reports emerge that you’ve been taping Oval Office meetings. You push back against demands from your partisan foes, and even some of your nominal allies, to release the tapes.

None of these gambits work. Your approval rating in national polls sinks to its lowest levels ever. Members of your own party, fearing damage to their own reelection prospects, start to ditch you. Obstruction of justice is the phrase of the moment; impeachment is in the air.

Facing this Constitutional crisis, which of the following do you do?

a) Murmur drunkenly to portraits on the White House walls.

b) Drop to your knees in prayer alongside your Secretary of State.

d) Take a victory lap through the Middle East.

Okay, I admit to some trickery. Answers a, b, and c are all correct. Amid the deepening Watergate scandal, Richard Nixon did those three things. But only answer d applies both to Nixon and Donald Trump.

In the week since Trump fired FBI director James Comey, who was leading a probe into potential Russian collusion with the Trump campaign and sundry other Kremlin efforts to destabilize our Republic, numerous commentators have pointed to the parallels between Nixon and Le Grande Orange. (Sorry, Rusty Staub, I couldn’t resist.)

But as far as I have seen, not one pundit has yet cited the truly weird coincidence that each beleaguered president sought out the tender mercies of the Middle East to at least briefly escape his pursuers.

Admittedly, Trump announced plans for his impending visits to Israel and Saudi Arabia, as well as the Vatican, before his controversial dismissal of Comey. Even so, analogies are inescapable to Nixon’s swing through Egypt, Saudi Arabia, Syria, Israel, and Jordan in June 1974. And some differences are inescapable, too. Of those, I’ll write more in a moment.

By the time Nixon took off eastbound in Air Force Force One, nearly two years had passed since the Watergate burglary. About a year had elapsed since his aide, Alexander Butterfield, revealed the existence of a White House taping system. The previous month, the House Judiciary Committee had begun impeachment hearings.

Like Trump these days, Nixon desperately needed to change the storyline and the accompanying optics. The biggest public-image success of his trip was a two-day visit to Egypt, where, as the Chicago Tribune described it, President Anwar Sadat put on a “pharaoh’s welcome.” (Provided you’re not a Hebrew slave, of course.) Crowds estimated at 3.5 million cheered Nixon as his motorcade coursed through Cairo. A photo of Nixon and Sadat made the cover of Time magazine, and in 1974 the cover of Time magazine was kind of like going viral. 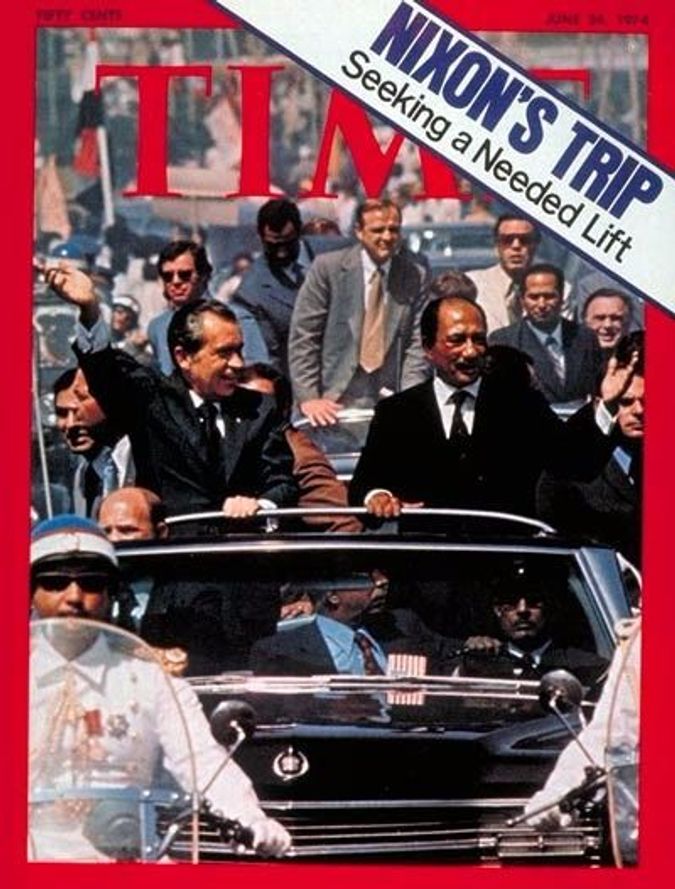 The glow did not last long. Five weeks after Nixon’s return to Washington, the Supreme Court unanimously ordered him to release the tapes, and once he did, “smoking gun” was enshrined as a cliché of political scandal. On August 8, Nixon resigned and Anwar Sadat was left alongside Sammy Davis Jr. and Rabbi Baruch Korff in the dwindling ranks of the Richard Nixon Fan Club.

Ah, but that does not tell the entire story.

As much calculation as went into Nixon’s Middle East trip, as desperate a play for survival as it was, the president had genuinely earned the right to such high-profile personal diplomacy. And even in his weakened political condition, it yielded long-lasting dividends.

The Yom Kippur War, launched with a surprise attack by Egypt and Syria against Israel, had occurred less than a year before Nixon’s visit. Nixon’s understanding of foreign policy and geopolitics helped keep the conflict from spiraling into a direct superpower confrontation.

By airlifting Israel 20,000 tons of arms, he shifted the battlefield balance in favor of the Jewish State when its defeat looked possible. Yet when Ariel Sharon’s troops counter-attacked and surrounded the Egyptian Third Army, Nixon and Henry Kissinger, who served as both Secretary of State and National Security Advisor, worked furiously to arrange a cease-fire through the United Nations. Had they not succeeded, the IDF might have annihilated the Egyptian forces and marched on to Cairo, which could have drawn the Soviet Union into a wider war.

Because the ceasefire remained shaky, vulnerable to continuing skirmishes of attrition, Kissinger undertook five months of so-called “shuttle diplomacy” between the belligerent nations’ capitals, starting in January 1974. He brokered disengagements between Israel and Egypt that month and between Israel and Syria in May.

Thanks to the Kissinger-Nixon initiatives, the Saudis in March 1974 brought an end to the crippling OPEC oil boycott against the United States. Sadat formally realigned Egypt with the U.S. rather than the Soviet Union, a process he had begun in 1972. Nixon and the Syrian dictator Hafez al-Assad restored diplomatic relations between Washington and Damascus.

Two days after returning from the Middle East, Nixon spoke in strikingly humble terms about the ecstatic reception he had gotten in Cairo, “What did this mean? What it really meant was not a welcome in a personal sense, but it meant something far more significant. It meant very simply that millions of people in that part of the world who have known nothing but poverty and war for the last 30 years desperately want peace and they want progress. They believe that America wants peace and progress, not only for ourselves but for them, too. They believe that we will help in achieving peace and progress without exacting the price of domination over them.”

Indeed, the Nixon-Kissinger diplomacy laid the groundwork for the Camp David peace accord between Israel and Egypt, which remains intact. Even amid the ongoing Syrian civil war, the disengagement line in the Golan Heights has essentially held for 43 years.

The Nixon who achieved so much in the Middle East – like the Nixon who created the Environmental Protection Agency and reopened relations with the People’s Republic of China – is the one who confounds critics like me. All these decades later, we try to reconcile that intelligent, far-sighted Nixon with the one who anticipated Trump: suspicious, vindictive, adroit at playing the race card, obsessed with undermining legitimate journalism.

All Donald Trump can bring to the Middle East on his imminent journey are his ignorant, impulsive sputterings on foreign policy and a putative desire to do a peace deal because of how well it would reflect on him. Good thing he’s not including Egypt on the itinerary or else we could be sure he’d brag about having bigger crowds in Cairo than Nixon did.

No, as the tale of two presidential trips to the Middle East tell us, Donald Trump bears comparison to only Nixon’s darker half, to the five o-clock shadow of his tormented soul.

Samuel G. Freedman, award-winning author, columnist, and professor, is a regular contributor to the Forward.