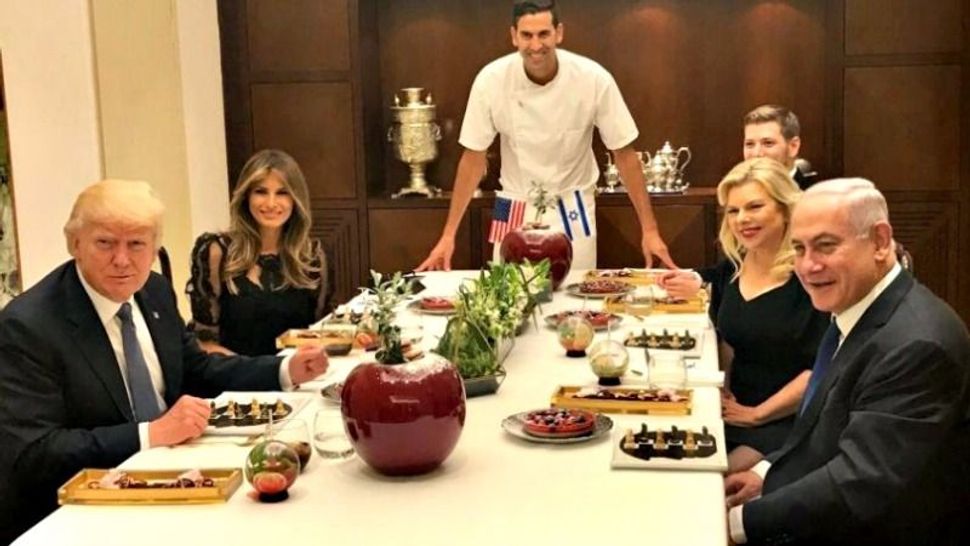 With the high holiday season upon us, many liberals – especially younger ones – are girding themselves for battle with their Trump-supporting relatives. “Uncle Irv,” I called these people last Spring, after a particularly irritating right-winger with whom I ‘celebrated’ the Seder for many years.

Uncle Irv can be particularly challenging at this time of the year. After all, this is the season in which we’re invited to review our ethical conduct – and for progressives, resisting the rule-of-law-flouting, Muslim-baiting, vulgarity-spouting Trump is the primary ethical issue of the moment. And yet, for all our talk of resistance, we can’t even persuade Uncle Irv.

Worse, the Days of Awe are also about forgiveness – not exactly the state of mind that comes to mind when Irv gets going about ‘Illegals’ ruining our country.

Believe me – I understand. I get comments from Uncle Irv on every column I publish, including, I am sure, this one.

“This anti-jew jew is an idiot!” one wrote recently.

“Much of Jay Michaelson’s claims are so silly and I need to further filter through the shit,” another opined.

And these were direct messages to friends, not the soapbox-cesspool known as the comments feature, which, for the record, I never, ever read.

Is there a way to work better with the Uncle Irvs in our lives, whether around the holiday table, in our Facebook feeds, or anywhere else? Here are two complementary tips.

Most of the time, you won’t be able to persuade Uncle Irv himself. Your real audience is the other people in the room. And to persuade them, you just have to practice some argumentative jujitsu: let the other guy fall over on his own.

One of my eloquent interlocutors online, for example, stated of Charlottesville, “There WAS violence perpetrated by both the fascist right AND the fascist left. I happen to believe there is little to differentiate between fascist white supremacists and anti-fascist demonstrators!!!!!!!!!!! They’re 2 sides of the exact SAME coin!”

In person, the exclamation points may be tonal, rather than grammatical. But here’s a response you might try: “You sound very upset.”

Works like a charm. Just pretend you are calm, confident, and collected. Fake it till you make it — because your tone is what will really persuade the persuadable.

Remember what’s really going on in such interactions. Neuroscientists tell us that the parts of the brain that process moral disgust are, in fact, the same ones that process actual disgust. This isn’t about rationality; it’s about how humans react to opinions they find odious. Imagine if someone vomited on the holiday table. That’s how both you and your conversation partner are wired to react to one another.

Arm yourself with that knowledge, take some deep breaths, and remember that your actual goal is to appear more dignified, more human, more compassionate, and more intelligent than Uncle Irv. You may have to fight your instincts in order to do so.

One reason you won’t persuade Uncle Irv is that you’re just some schmendrik at the dinner table, and you’re going up against Fox News, Irv’s entire Facebook feed, fake news, the Trump administration, and, most importantly, decades of identity-formation.

Irv’s ideological choice is not about Democrat/Republican, but about deep, primal stuff: trust/fear, strong/weak, us/them, pure/impure, in-group/out-group. For years, Irv has defined himself on one side of these dichotomies. Being Jewish means standing up for Jews against their enemies. Being an American means holding certain values and being patriotic about them. Being smart means being tough, because there are tough people in the world and you have to defeat them.

You are not going to undo any of these beliefs.

Instead, go shallow. Avoid rhetorical questions. Avoid ad hominem attacks. Avoid going to “what the real reason” is. Instead, I suggest facts.

Provide, for example, a factual distinction between, say, Nazi-saluting white supremacists and occasionally thuggish but obviously harmless young people. Offer, calmly and as if discussing the mating habits of fruit flies, that one group perpetuates a 2,000 year legacy of antisemitism and cheers (or denies) the deaths of six million Jews, while the other side, however misguided its tactics, seeks to protect Jews, people of color, and other targets from the first side.

Or, to take a different example, consider what a friend recently said of Sheriff Joe Arpaio, recently pardoned by Mr. Trump.

“I believe Sheriff Arpaio was prosecuted not for breaking the law so much as for enforcing it in a politically incorrect manner,” my friend opined. “Did he see what illegal immigration was doing to crime levels and try to stop it? He enforced laws that the federal government wanted to ignore.”

To counter this kind of claim, offer a few facts. You can start with the fact that Sheriff Joe Arpaio was prosecuted and convicted of contempt of court, because he directly defied a court order and continued to target and investigate people solely on the basis of being Hispanic. You can tell your interlocutor that those suspected of being “illegal” were placed – without conviction – in a makeshift tent-jail where temperatures soared into the 100s, where inmates were not given proper medical attention, where they were fed rotten food, where they would be routinely humiliated by being forced to march around in pink underwear, and where more people hanged themselves per capita than any other prison in America. Arpaio himself called them “concentration camps.”

You might even get to mention that every social-scientific study that has been conducted has concluded that immigrants are less likely to commit crimes than people born in the United States. Of course, there are horrifying stories of immigrants who do commit crimes. But every population group commits crimes. Immigrants – legal and illegal – simply do so less than native-born people.

Of course, these two strategies – jujitsu and staying shallow – reinforce one another. If you fall into the deep causes of why Uncle Irv believes what he does, you will simply sink into the mire. The same will happen if you take his bait and make it about the two of you as people.

Instead, find a calm space in your mind, and rest into it. Know that nothing about you is actually at stake here, nor are you solely responsible for protecting the vulnerable, saving the environment, or convincing Uncle Irv.

You are adding your strength to a giant tug-of-war match, not pulling on your own. As the Ethics of the Fathers says, you don’t have to finish the task – you just have to keep at it.

You will probably fail in most individual encounters, but each one might also yield a slight, incremental movement toward justice. That counts as success.

And as a bonus, you might find that your encounters with Uncle Irv become part of your spiritual path after all. If you’re diligent and fortunate, you can do your spiritual practice at the dinner table even more than in the synagogue.

For a little while, anyway.