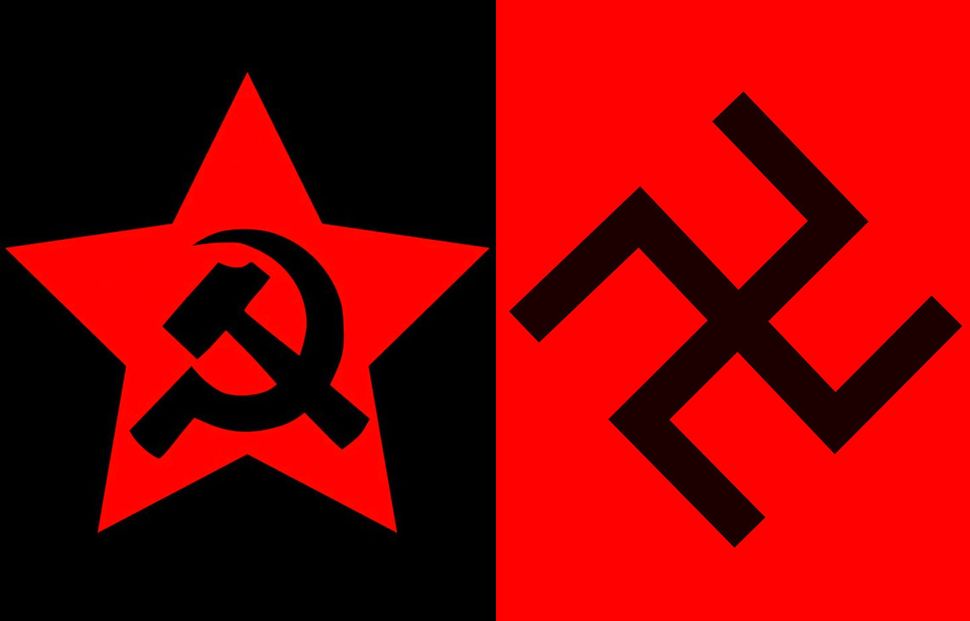 In the new normal of 2017, in which far-right and far-left militants clash openly in America’s public square, a contentious 20th century debate is newly relevant: is the extreme left as dangerous and repugnant as the extreme right? Should the hammer and sickle be as offensive as the swastika? Was Communism as evil as Nazism — a question sure to generate plenty of heat as we approach the 100th anniversary of the Russian revolution?

Conservatives have long complained of a double standard for Nazi and Communist crimes. To many on the left, on the other hand, equating Communism and Nazism is an obscenity bordering on Nazi apologism. Some whose life’s work is focused on the Holocaust, such as the Simon Wiesenthal Center’s Ephraim Zuroff, also object to what they see as a pernicious false symmetry.

It is a question of particular personal relevance to me, as a Jew born in Soviet Russia, where I lived until coming the United States as a teenager in 1980. There were victims of both Communist and Nazis barbarism in my own family. My paternal grandparents were survivors of Stalin’s gulag, imprisoned for trying to escape to Israel and thankfully released early because of Stalin’s death. My father’s uncle was killed in one of Hitler’s death camps.

In the closet-dissident, mostly Jewish milieu where I grew up, the belief that Stalin was as bad as Hitler and that Communism was Nazism’s equally odious twin was entirely commonplace. More than that: there was a not-uncommon view that Communism in its Stalinist incarnation was worse. To a large extent, this reflected the influence of Alexander Solzhenitsyn, whose works (especially “The Gulag Archipelago”) were clandestinely and reverently read, and who was quoted as an authority on Communism’s higher body count and greater cruelty.

Later, in the United States, I had the jarring experience of seeing American liberals use “anti-Soviet” and “anti-Communist” as pejoratives, and frustrating conversations with people who thought Ronald Reagan’s description of the Soviet Union as an evil empire was crude warmongering.

But I also encountered the fact that the crimes of Communism were sometimes used to minimize the Holocaust or suggest that the mass murder of Jews was getting too much attention. At worst, those parallels were given an overtly anti-Semitic twist by people who blamed Communist mass murder on “Jewish Bolsheviks,” suggesting a moral equivalence not just between Communists and Nazis but between Jews and their persecutors. (Such arguments now flourish on the “alt right,” with references to the “Jewish Holodomor” — the Ukrainian terror-famine of 1932-33 — as a counterpart to the Holocaust; never mind that by 1932, the twelve-person Soviet Politburo bolsheviks had precisely one Jewish member.)

Today, I agree with Elie Wiesel’s judgment, in his 1975 essay “Why Solzhenitsyn Troubles Me” (published in the 1978 collection, “A Jew Today”) that there is something troubling about Solzhenitsyn’s tendency to treat the Holocaust as a lesser crime than Stalin’s butchery. However, Wiesel’s point was not to dismiss Communism’s crimes as lesser, but to argue that “there is a limit in evil beyond which comparisons are no longer relevant.” And in a 2004 interview, he observed that Communism was similar to Nazism in its conviction that the end justifies murderous means.

For many, it’s the ends that make a key difference. As British historian Orlando Figes wrote in his 1997 book, “A People’s Tragedy: The Russian Revolution 1891-1924,” Communism is viewed as an expression of “humanity’s historic striving for social justice and comradeship,” a noble dream turned to horrific nightmare. Nazism, on the other hand, stood for racial supremacy and brutal oppression of “lower” races. Thus, Figes argues, the Communist experiment inspires some sympathy or at least respectful understanding, while the Nazi project “can only fill us with revulsion.”

But how meaningful is this distinction? Figes himself shows that from the first days of the Revolution, terror was an essential part of Bolshevik creed, enthusiastically embraced by Vladimir Lenin and his comrades-in-arms. Mass murder of the “class enemy” was openly and explicitly advocated, not only as revolutionary strategy but as a tool of social transformation.

“We must win over to our side 90 million of the 100 that populate Soviet Russia. There is no talking to the rest — they must be eliminated,” declared Grigory Zinoviev, Bolshevik leader and close Lenin associate, at the September 1918 Petrograd conference of the Russian Communist Party. Two years later, fellow revolutionary (and in less than two decades, fellow victim of Stalin’s terror machine) Nikolai Bukharin wrote, “Proletarian coercion in all its forms, from executions by shooting to compulsory labor, is, paradoxical though it may sound, a method of molding Communist humanity out of the human material of the capitalist era.”

What’s more, the Soviet ideal of a brotherhood beyond ethnic and racial lines often turned, in practice, to systematic persecution of populations seen as more loyal to their own kind than to the Communist fraternity — be it Ukrainians in the early 1930s or Jews in the late 1940s and early 1950s. (Had Stalin lived a little longer, Soviet Jews might well have faced mass deportation to Siberia, a de facto death sentence for many.)

Conversely, Nazi racial supremacism was often masked with proclamations of freedom, brotherhood and justice for (German) workers. It’s no accident that one of the most popular songs of the Russian revolution — “Bravely, O Comrades, march onward” — was adopted as a hymn by the Nazis with barely changed lyrics, except for a line extolling Hitler and a reference to corruption by Jewish gold. Likewise, a look at Soviet and Nazis posters shows a strikingly similar esthetic.

The Holocaust was a unique evil in its diabolical attempt at the total annihilation of a people. Nazism created death camps, while the camps of the gulag were not specifically intended to kill — though in at least some of them, quickly working people to death seems to have been a deliberate policy.

Stalinism had its own distinct evils, including random terror that struck down even those most loyal to the regime. An ordinary German who either supported the Nazi regime or took no interest in politics generally had no reason to fear arrest. In the Soviet Union under Stalin, as British writer Martin Amis wrote in his eccentric but fascinating 2002 study, “Koba the Dread: Laughter and the Twenty Million,” “Everyone was terrorized, all the way up: Everyone except Stalin.” (“Koba” was Stalin’s nickname in his revolutionary days; twenty million is a low-end estimate of Soviet Communism’s human toll.)

You could be arrested and sent to the gulag because someone denounced you for an absurd reason: the aunt of a family friend of ours in Moscow was imprisoned because someone reported that she played a funeral march on the piano the day Bukharin was shot. Or a scapegoat could be needed for production problems at the factory where you worked. My maternal grandfather, a Party member and an aviation engineer, sometimes said to my grandma, “If they arrest me, please don’t believe that I’m an enemy of the people.”

In “Koba the Dread,” Amis struggles with the difference between attitudes toward Communism and Nazism and concludes that, on a visceral level, the “species shame” at the human capacity for monstrous deeds is “deeper in the case of Germany.” He attributes this partly to the Nazis’ “biomedical” approach to extermination.

And yet Amis also notes ways in which Communism was the worse poison: for instance, it destroyed civil society—social bonds and institutions independent of the state—in a way Nazism did not, which made recovery from Nazism easier. Moreover, “Nazism could not be duplicated” (other fascist states did not even come close); on the other hand, “Bolshevism was exportable, and produced near-identical results elsewhere.” Indeed, the Communist experiments in China and Cambodia were far more barbaric than in the Soviet Union, both in terms of total state control over everyday life and in terms of mass slaughter.

Still, sympathy for the noble dream persists; even outright Communist apologetics can still be found on the progressive left. Three years ago, Salon.com ran a piece by activist Jesse Myerson titled “Why you’re wrong about communism,” supposedly a debunking of Americans’ “huge misconceptions” on the subject (but actually a hodgepodge of excuses and red herrings).

In 1999, a group of historians published “The Black Book of Communism,” a monumental examination of the crimes of Communist regimes. Left-wing journalist Daniel Singer took them to task in The Nation for a one-sided approach that left out the good things: “There was also enthusiasm, construction, the spread of education and social advancement for millions.” Singer was particularly dismayed because he felt that the authors were using Communism’s record to discourage belief in “collective action and the possibility of radical transformation” and promote resignation to the way things are.

Cathy Young is a contributing editor at Reason magazine and is the author of “Growing Up in Moscow: Memories of a Soviet Girlhood”. Follow her on Twitter, @CathyYoung63