Our Conversation About Israel/Palestine Is Broken 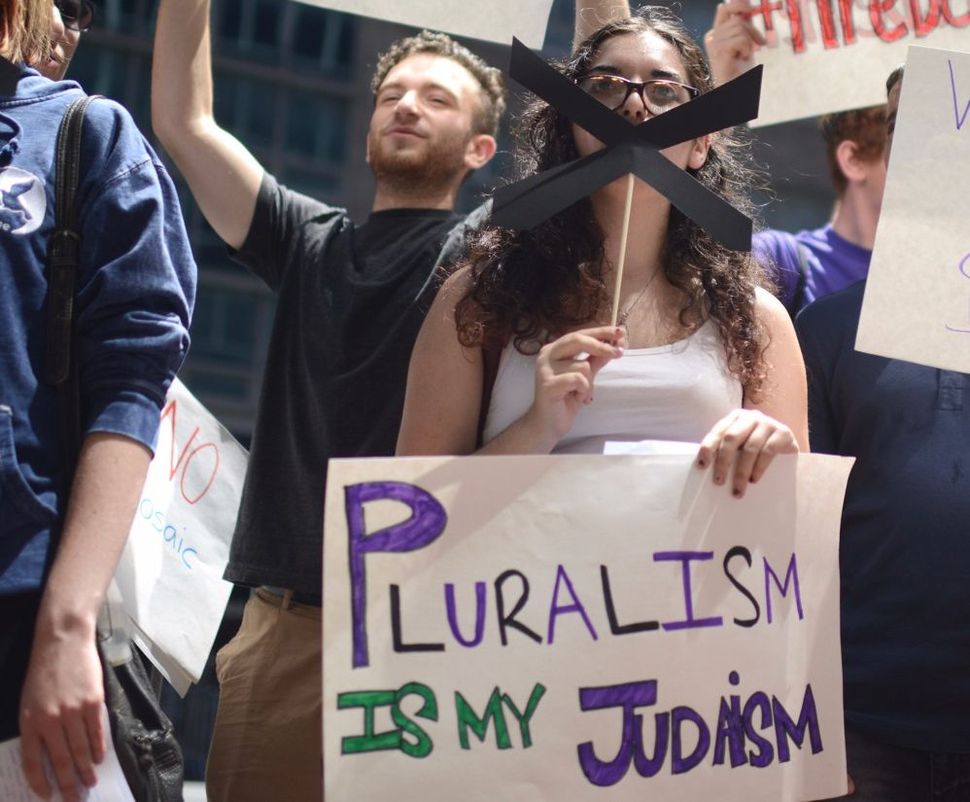 Recently the Palestinian Freedom Theater had its U.S. Premiere of the play “The Siege” at NYU’s Skirball Center. Almost immediately, members of the Jewish leadership and right wing pro-Israel groups came out against the play, claiming it is “one sided”.

And they are right.

The play is one sided. It represents the Palestinian side of the events that took place in 2002 at the Church of the Nativity.

But rather than responding to the play, the Israeli government tried to get it banned.

This has sadly become par for the course. Daily, it seems, new red lines are drawn, excluding those who don’t subscribe to the right positions on Israel.

In December of 2014, the renowned artistic director of Theater J, Ari Roth, was fired after two decades for staging “The Admission,” a play by Israeli dramatist Motti Lerner. In March of this year, B’nai Keshet were expelled from Ohio State’s Hillel for co-sponsoring an event for LGBTQ refugees with JVP. And just last week, a reading of the play “Rubble Rubble” by Jewish playwright Dan Fishback, scheduled to take place at at the Center For Jewish History, was canceled over its playwright’s Israel politics, adding to the growing number of community members pushed out for not obeying these red lines.

The response to something you don’t agree with is no longer to dispute it, but to bar it.

For me, an Israeli-American artist, this is personal. My own play, “The Forbidden Conversation”, which premiered last year at AJHS, deals with exactly this theme: the broken nature of the Jewish conversation about Israel/Palestine.

In order to understand this brokenness, I spoke to many people about our inability to disagree with civility. I spent the last few years engaging in conversation with Hillel students, rabbis, censored artists, affected communities, professors of Jewish studies and families experiencing great difficulty communicating.

All these conversations painted a clear picture of a dysfunctional Jewish communal culture, in which we lack the ability to create spaces where strong disagreement on Israel/Palestine is welcomed. In these conversations, I heard first hand how much pain this dynamic causes and how many young Jews crave spaces that are inclusive, where they can freely figure out and develop their own points of view.

And yet, though we are all painfully aware of this problem, the Jewish community is not doing anything to ameliorate it. The opposite is happening! We keep drawing lines, and pushing people out who don’t agree with us.

This happens not only on the right but also on the left. I do not support cultural or academic boycotts of Israel for the same reason that I am opposed to these red lines: They both target free speech, artists and peace activists. But I also oppose the vilification of those supporting different forms of boycotts.

And that’s what we’re doing when we draw red lines around our conversations: We are boycotting our fellow Jews. And it’s the worst thing we could possibly be doing right now. Questioning community members’ “kosherness” on Israel will only perpetuate the growing discomfort and disengagement from Israel — and from the community altogether.

Indeed, this is the open secret about the new Israel litmus tests. The censorship of voices critical of the Israeli government, the Occupation or Zionism do not have a political benefit to those advocating for their enforcement. They do not weaken the Jewish political left — the opposite is true. Forcing organizations like Breira and the New Jewish Agenda to shut down did not stop the rise of J Street, of which I am a proud member and which has fundamentally changed the conversation in Washington; nor did it stop the growth of Jewish Voice for Peace in both influence and size on college campuses, or their growing influence in the social and racial justice movements. These red lines can’t even really prevent cultural events; they rather force them outside Jewish spaces, where they get more publicity in the process.

Rather than having a positive effect, what these efforts of silencing do is contribute to the toxic environment that compromises some of the things our community and its leadership value most. It creates an environment that alienates young Jews who are disaffected with the rampant intolerance to different points of view on this key issue. It promotes a culture that signals that those who hold different views on Israel are not part of the Jewish family and their Jewish experience is not valid.

We must cultivate spaces grounded in commitment to Jewish identity and loyalty to Jewish life, where we can all better understand and explore our own perspective and where the other side comes from. We must create spaces where we don’t question each other’s Jewishness, no matter where we stand on Israel; a place that transcends polemic attacks and name calling; a place that values strong disagreements and connection to Israel-Palestine in all forms; a place welcoming to those who are confused and those with strong opinions; a place that recognizes that there is more than one way to love Israel, that there is more than one way to oppose the Occupation, and that there are many ways to be Jewish.

It is imperative that we have both communal and political spaces where we can see each other, talk to each other and work together despite our deep differences.

We must do better.

Gili Getz is an Israeli-American artist, actor and photojournalist based in New York. He served as a photographer for the IDF and as a news editor for Ynet.

Our Conversation About Israel/Palestine Is Broken