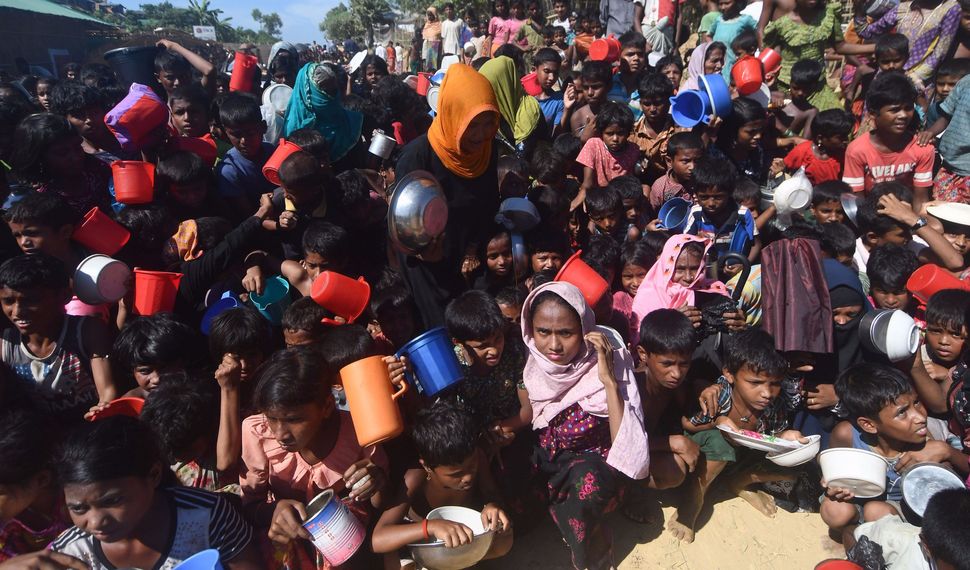 On September 26, I published a piece in the Forward detailing a petition before the Israeli High Court to end the sale of Israeli arms and training to the military of Myanmar, who are widely regarded as guilty of a campaign of ethnic cleansing against the Rohingya which some would call genocide.

The Israeli government classified the contents and verdict of the hearing, refusing to cooperate with the democratic objective of bringing transparency to Israel’s arms trade. Since then, reports have surfaced that Avigdor Liberman, the Israeli defense minister, has quietly suspended arms sales to Myanmar in response to widespread protests from Israeli activists and lawmakers, as well as Jewish religious leaders in Israel and the United States.

This report, whose source is a French publication called Intelligence Online, has been met with both criticism and skepticism. “The way to ensure transparency is by passing laws, not by leaking information to a media outlet,” Jill Jacobs of T’ruah: The Rabbinic Call For Human Rights told me by way of email.

Eitay Mack, the lawyer responsible for the now classified petition, told me he does not even believe the report. And even if true, it would be an insufficient response. (Representatives of the Israeli Ministry of Defense and Ministry of Foreign Affairs did not responded to requests for comment.)

Mack points to previous Israeli government behavior to explain his skepticism. In both South Africa and Rwanda, for example, the Israeli government applied sanctions which were largely cosmetic and ineffective, says Mack. Then there’s the fact that the French report states that the sales of weaponized attack boats to Burma is not problematic or under dispute. “This is patently false,” says Mack. “In the final years of the civil war in Sri Lanka, in which tens of thousands of citizens were killed, the Sri Lankan government used Israeli-made attack boats similar to the boats sold to Burma to attack civilians in the Tamil coastal areas. Similarly, the Burmese junta may use the boats purchased from Israel to attack villages in the coastal and river areas in the Burmese state of Rakhine, and attack members of the Muslim Rohingya minority when they try to flee.”

But the violence against the Rohingya is not the only instance where Israeli arms have been used by governments for human rights abuses.

Mack, a long time agitator for greater disclosure of the Israeli arms and training industry, has also recently brought to light the troubling appearance of riot control vehicles made on a Kibbutz in Israel among the tools of the security forces of Burundi.

Recall that in 2015, the UN issued an alert warning of a potential genocide in Burundi. In March of 2016, the European Union froze all aid to the country’s government as a result of reports of serious human rights violations.

In the meantime, protesters have been murdered; corpses, including those of minors, have been found shot and handcuffed, sometimes mutilated; human rights activists and journalists have been assassinated and have disappeared. Some detainees have been taken to secret detention centers. UN reports from September 2016 and August 2017 indicate that the violence in Burundi may constitute crimes against humanity.

And in this video, shot in Burundi in 2015 at the beginning of the riots, you can see an Israeli riot control vehicle.

According to Amnesty International, Israeli riot control vehicles have been used in Burundi since 2015. They are produced by Kibbutz Beit Alfain the Beit Alfa Technologies factory, which belongs to the socialist-Zionist Hashomer Hatzair movement. The colored water they spray helps mark protesters, making it easy to arrest them even after they leave the scene (they were recently used against ultra-Orthodox protesters protesting inscription into the IDF). And for those who doubt Amnesty’s report, the kibbutz’s website celebrates a visit from Burundi’s Minister of Interior at the factory that produces the riot control vehicles from June 2013. The vehicles were apparently delivered to Burundi in the beginning of 2015.

Perhaps most disturbingly in the context of this story, the same reports detail how the police’s “special anti-riot unit” has turned its headquarters in Bujumbura into a torture center, using the most brutal methods of sexual, physical and psychological torture imaginable. In other words, Israeli riot control equipment may be helping to land people in that very hell (the secretariat of Kibbutz Beit Alfa and the Beit Alfa Technologies factory did not responded to requests for comment).

Regrettably, sales of riot control equipment produced at Kibbutz Beit Alpha to despotic regimes is not a new problem. As with other ethically questionably Israeli arms sales, it reflects an older pattern.

In 2015, Lily Taubman and other survivors of the Pinochet regime filed a petition in Israel under the Freedom of Information Act (FOIA), aiming both to confront Israeli collaboration with Chilean dictator Augusto Pinochet’s regime and to find information which could shed light on the fate of the disappeared, including Taubman’s father. The FOIA request met with the startling response that the government could not comply; there were simply too many state documents pertaining to Israel-Chile relationships, coming to 19,000 pages of material.

An affidavit by Israeli citizen Eitan Kalinsky was attached to their petition. During their time in Chile, Eitan and his wife attended several demonstrations in support of democracy. In his affidavit, quoted in a piece Mack wrote for the Israeli magazine +972, Eitan states the following:

During one of the protests in Santiago there were vehicles with colored water cannons, and the color of the water changed every few minutes, for example a very strong green. The Hashomer Hatzair envoy told me: “Look, it says ‘Hakibbutz Haartzi Hashomer Hatzair.’” We all knew it was made in Kibbutz Beit Alfa. The colored water pushed the people back with immense force and one shop window collapsed. I was an envoy of the State of Israel and could not criticize the state, so I kept my pain to myself.

Throughout the Pinochet years, according to Ha’aretz, Israel maintained excellent relations with Chile, despite the horrific torture, disappearance, and human and civil rights abuses perpetrated by Pinochet’s government. The two countries supported each other in the United Nations and signed bilateral agreements. Declassified American documents contain references to arms deals with Israel, including a cable quoting the American undersecretary of state from April 10, 1984, saying Israel was one of Chile’s main arms suppliers, making it difficult to enforce effective sanctions

This ugly history speaks for itself. It is essential that transparency and responsibility be introduced to Israel’s arms trade.