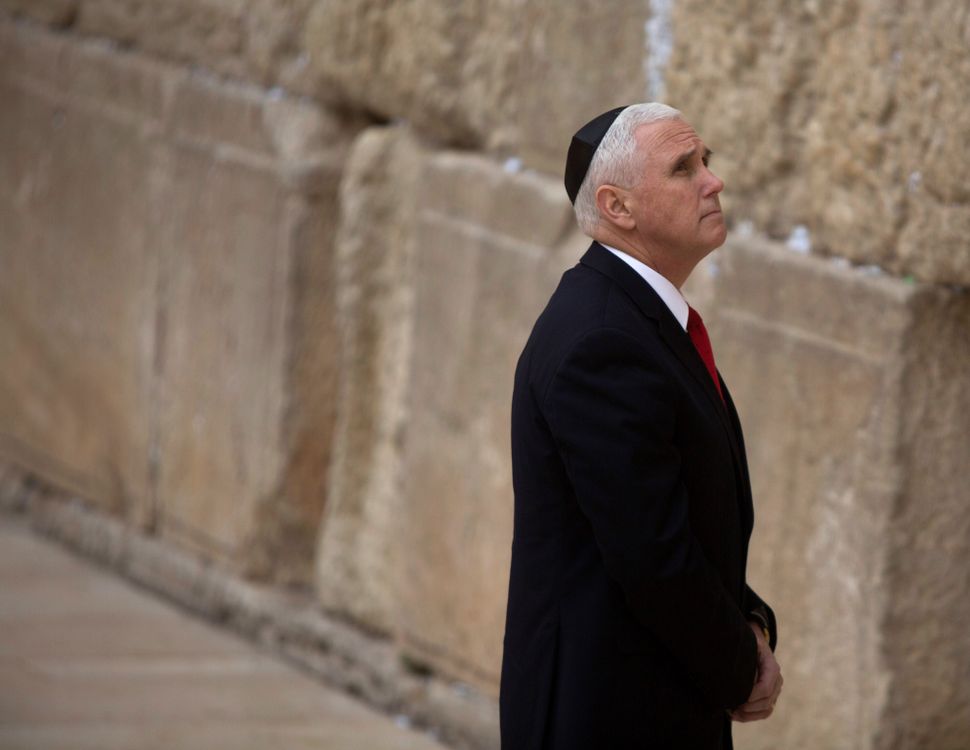 This past week, Vice President Mike Pence and his wife Karen Pence made a historic visit to Israel. Unsurprisingly, it was largely pilloried by liberal Jews.

What was the Vice President’s offense? Being a pro-Israel evangelical Christian, a perspective some Jews find suspicious.

In these pages, Jane Eisner has warned of the dangers of evangelical support for Israel on the grounds that “Evangelical support for Israel may be heartfelt, but in the end it is transactional.” And when Pence addressed the Knesset, Eisner heard more reason to worry. Pence’s speech, writes Eisner, reflects his worldview, “which is completely in sync with his particular brand of Christian evangelicalism, and leads him to view everything through a strict, biblical lens,” at odds with the vision of the secular, socialist Zionist pioneers.

Furthermore, “Policy-wise, Pence’s new form of ‘pro-Israel’ is devoid of even a hint of criticism of the Israeli government or the kind of warnings that good friends offer good friends,” writes Eisner. This should be of great concern to Jews, for “when that policy becomes more Christian, it becomes less Jewish.”

When it came out that former Chief Rabbi of Britain Jonathan Sacks had helped Pence with his speech, Haaretz was even more scathing. In a piece entitled “Lucky the Jews Didn’t Understand What Mike Pence Was Really Saying”, Amit Gvaryahu argued that Pence’s speech, though rife with biblical references, actually repudiated Jewish tradition, rehearsing tropes that have historically been used in order to persecute Jews and ultimately telegraphing that Jews are the tools in a story of Christian salvation.

Gvaryahu writes that Sacks’ role in all this “suggests that the Pence speech isn’t just a public display of theological impudence but of Jewish subservience, in which a prominent Orthodox rabbi internalizes Christian supercessionism and parrots it back as politically expedient pablum.”

And also in these pages, Jay Michaelson wrote that Mike Pence’s Love Of Israel Is Dangerous For Jews. “More and more Evangelicals now hold Passover Seders, sing songs in (broken) Hebrew, display Jewish stars and other Jewish insignia, and see themselves as the ‘real’ Jews following in the footsteps of Yehoshua ben Yoseph,” writes Michaelson. “Some of this is cute (the broken and misspelled Hebrew especially), but only if you stay on the surface. Really, this philo-Semitism is Christian supersessionism, with Christians supplanting actual Jews as God’s chosen people. It’s creepy.”

Imagine calling another religious group — Jews, perhaps — “creepy” for their beliefs. We would certainly call that anti-Semitism. And yet, Michaelson’s views are mainstream, including his contention that “American Evangelicals believe that we are living in the end times — that the Rapture will take place in their lifetimes.” Animated by this belief, according to Michaelson, is support for Jews moving to Israel, “not because it’s the startup nation but because it’s the future site of Armageddon.”

As Gvaryahu put it, “Jews in this story are a tool or a pawn for the triumph of the evangelical Christ, perhaps in some apocalyptic event in the future. The redemption of the Jews is a harbinger for the ever-closer second coming of Jesus.”

But this is an oversimplification. Despite these claims, Christian support for Israel does not rest solely with the expectation of the coming “end times.” In Israel, American evangelicals see a philosophical and political ally, as well they should. Their support of Israel has much more to do with a belief in our shared Judeo-Christian culture than it does in the fulfillment of a religious prophecy.

As Esther Fleece, the author of “No More Faking Fine” and a trusted voice and adviser in the evangelical community, explained to me, “I have a love for the Jewish community and what people need to understand is Evangelicals are not monolithic, despite people trying to put them in one category. They have different opinions on different issues, even on Israel.”

And despite what liberal Jews believe, this support does not rest on the end of days. “The majority of those who support Israel who I associate with do because we have an affinity for the people because of the Scriptures, not because of some doomsday philosophy,” said Fleece. “I’m a follower of Jesus, and Jesus was Jewish. It’s a part of my history and heritage; it’s not due to some obsession with end times.”

This overly rehearsed claim stems from one thing, says Fleece. “I find that when individuals make those claims in the media, I assume those who have written them don’t have a relationship with an evangelical,” she said.

Erick Erickson, the conservative pundit and editor of the Resurgent, is now pursuing a PhD in Theology at Southeastern Baptist Theological Seminary. He agrees with Fleece. For most Christians, Jews represent “a group of people created in the image of God who have the only democracy in the Middle East and who are under constant threat from Islamic radicals, despots, and terrorists,” Erickson told me. “It should be natural for any person of faith to support such a country.”

Furthermore, “The whole idea of a belief in an imminent return of Jesus exists in Christian fever swamps on the internet and nowhere else,” said Erickson.

“Christians view the end times as that moment from when Christ exited the Tomb on Easter,” not when Jesus returns to earth, Erickson says. Likewise, a large number of prophecies have to be fulfilled for any of this to progress, including traveling to every country to make disciples. This stage is still impossible, explains Erickson, because of the lack of biblical translations into necessary languages.

Erickson also stressed that evangelical support of Israel has nothing to do with a desire to evict the Jews and bring about the end times. “While some vocal Christians connect rebuilding the physical temple in Jerusalem to the return of Christ, most Christians do not,” he told me. “The actual majority of Christians believe there is, to quote St. Paul, neither Jew nor Greek and that the Biblical role of Israel has been replaced by the church.”

You wouldn’t know it for the way liberal Jews tend to speak about Christians, especially Mike Pence. But had it been Joe Biden and not Mike Pence who visited Israel last week, they would have been cheered. Similarly, had Rabbi Lord Jonathan Sacks advised Biden on his speech as he advised Pence, both would have been applauded for working together to make sure a respected Jewish voice had such an important role to play in a speech of such magnitude.

According to a source at the White House, Pence set out to deliver “the most Zionist message ever delivered by a non-Jew in the history of the Knesset.”

And for that, the left went after him.

The pushback against against Pence and Rabbi Sacks’s role in drafting his speech isn’t just partisan (though it’s that too): it’s anti-Christian. Liberal Jews should know better.